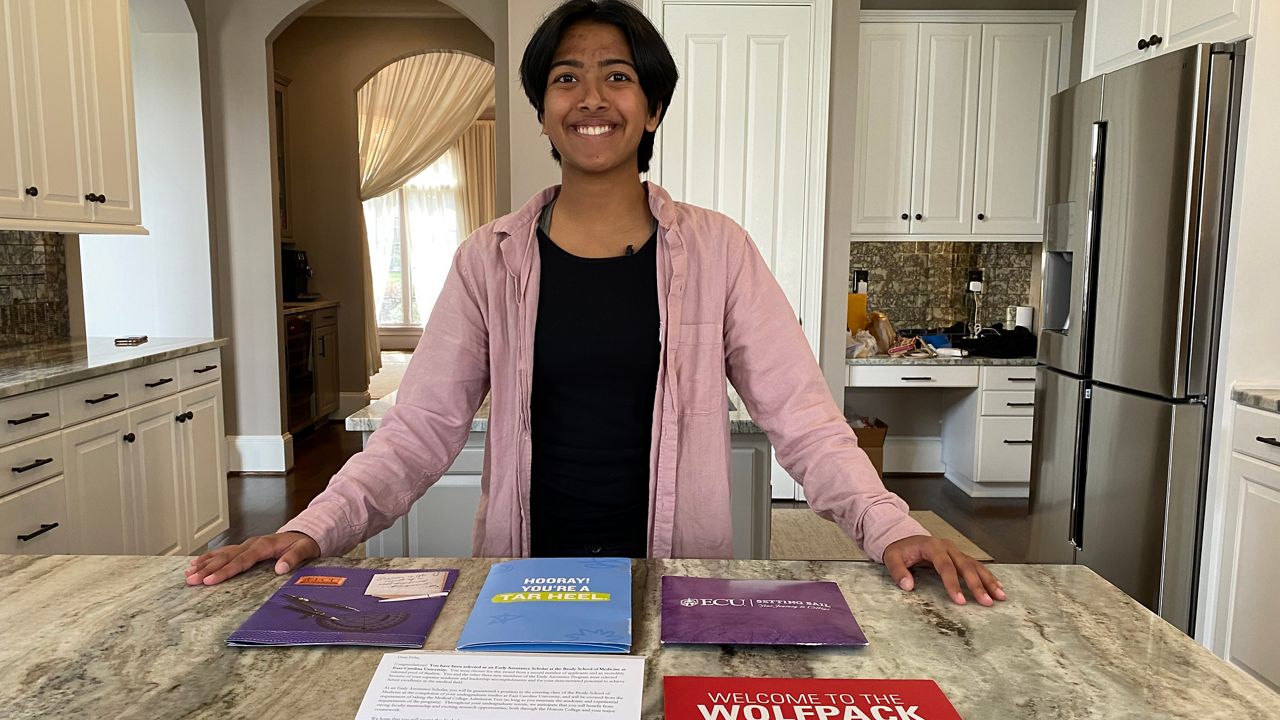 MOORESVILLE, N.C. – Some high school seniors are anxiously waiting to receive the last acceptance letters from universities this month.

High school senior Esha Shah said the process has been stressful, and the pandemic has added to the anxiety

A self-care and health transformation expert encourages teens to communicate their feelings, practice self-care and limit their time on social media

Once they receive them, they have until May 1, National College Decision Day, to make their choice.

She attends a residential public school in Durham focused on STEM education.

The 18-year-old wants to major in neuroscience. She’s applied to 10 colleges and has heard back from at least six.

The last acceptance letters will go out early April.

“You’re still waiting for those admissions to come back, so there’s a lot of anxiety,” Shah said.

She added it’s hard not to compare to others when you see social media posts about people being accepted into certain colleges.

“Of course I’m happy for them, but there’s always a little bit of 'man, I wish I got in or I wish I applied,’” she said.

In addition, she said the pandemic added another level of stress even before applying. It paused activities like wrestling, track and in-person math tutoring, which she planned to include in college applications.

“It was one of the moments, well I was like, 'what am I going to put on my resume for college?' Because I don't really have anything for a whole year and a half almost,” Shah said.

She looked at many colleges virtually instead of checking them out in person.

“Tours, those are really big things. It's like knowing when you walk onto a campus, I want that feeling. This is where I'm supposed to be at,” she said.

Shah’s mom, Dipal, is helping alleviate some of the stress with activities, including dancing, yoga and conversation.

“Children have been more isolated, and we're just trying to move into this new phase of trying to get out of the pandemic, but yet that stress and that the mental health concerns are still there,” Dipal Shah said.

Dipal Shah is a self-care and health transformation expert who owns Ananda 4 Life.

She has noticed more of her clients asking her for advice on how to help ease their children’s stress.

She recommends teens to communicate their feelings, spend less time on social media and practice self-care.

“The other thing I would recommend is making sure you understand there is going to be rejection and how to manage that rejection because you’re going to be applying to so many different places, but realizing that there's so much opportunity out there, so rejection is going to be normal,” Shah said.

This mindset and family support has helped Esha Shah when she wasn’t admitted into two schools.

“A lot of it was telling myself, you know, like even though I was rejected. It's not the end of the world,” she said.

She has already been accepted into at least four colleges.

“There are so many more opportunities waiting for me,” Shah said.

She is considering attending a university in North Carolina.