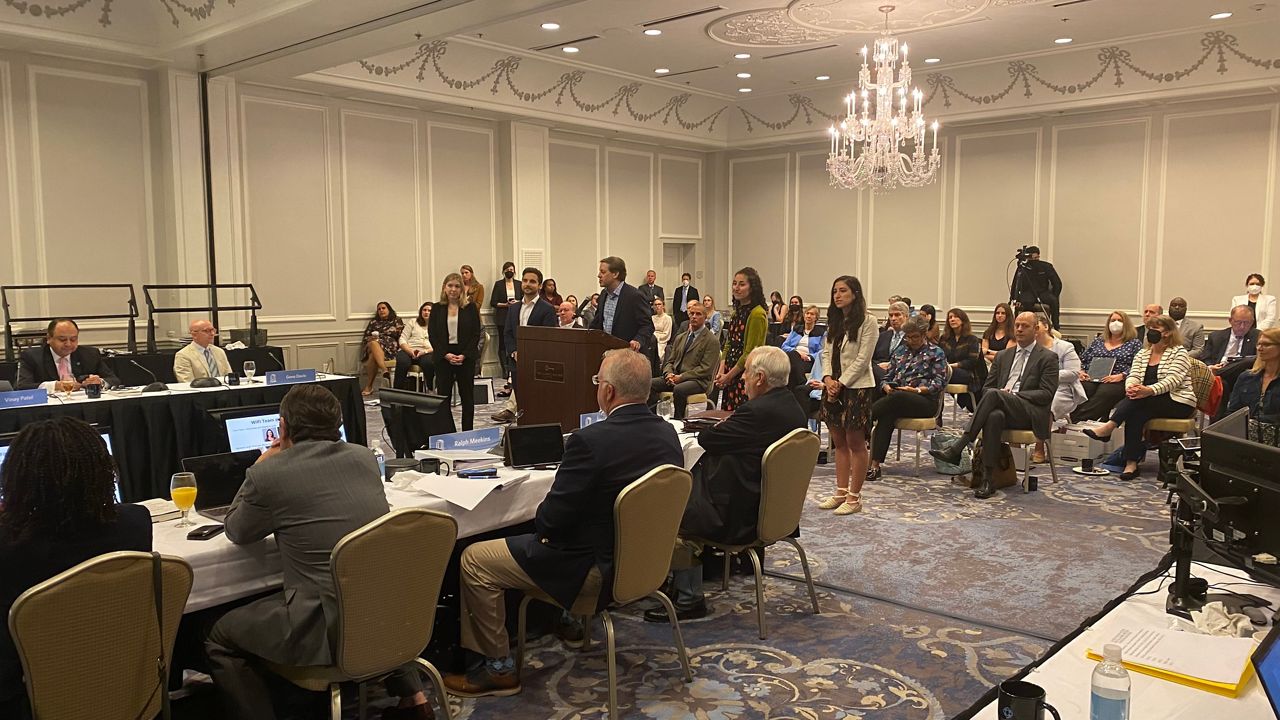 A group of professors at UNC-Chapel Hill discuss the long-term effects of technology use on teenagers' mental health. (Photo: Patrick Thomas)

CHAPEL HILL, N.C. — A wave of funding is now flowing into the University of North Carolina at Chapel Hill to study the impact of social media and technology on teenagers' brains.

UNC researchers' work will serve as a tool for parents to guide their children's technology habits, they told the school's board of trustees on Thursday morning.

A team of professors said there’s a direct connection between how much times teenagers are on their phones and how well they can engage someone their age in person.

“We hope that we can start to show the science about how important it is for the way that adolescents’ brains are being shaped,” Telzer said.

A $10 million gift from the Winston Family Foundation allowed the state’s flagship university to be the hub of a nationwide research effort: the Winston National Center on Technology Use, Brain and Psychological Development. Telzer will serve as a co-director of the new center, which will be housed across buildings on UNC’s campus.

All of the data came from students volunteering information during an on-campus course called PSYC 180: Social Media, Technology, and the Adolescent Brain.

Dr. Mitch Prinstein, professor of psychology and neuroscience, said the information was gathered over four semesters from 800 students.

“We are already seeing a generation of kids who are feeling far more socially anxious in in-person situations," said Prinstein, also a co-director of the center.

The professors revealed that on average, teens pick up their phones 100 times a day and spend more than eight hours of screen time on their smartphones. The Winston National Center will study the ties between a teen’s online traits and any mental health symptoms.

“I think anybody is shocked to see the sheer amount of time these teens are spending online. They are spending a majority of their day around the clock on their phones,” Telzer said.

Scrolling on a phone for hours on end may impact how their brain is shaped across time.

“Adolescent years are a time when the brain is changing dramatically, more so than any other period except in very early brain development,” Telzer said

The goal of their work is to use science to make a change. Telzer said there’s a reason a teenager checks for notifications on Facebook and Instagram. In their mind, it is an indication of a fundamental need to belong and be liked.

“When big companies are making a lot of money on it and using algorithms to really transform the experience away from the user and more towards getting you hooked in, it’s perhaps no surprise that these platforms are not doing as much benefit as they are doing harm in the long term," Telzer said.

“That’s why kids get so addicted to social media,” Prinstein said.

Prinstein said he has studied relationships between adolescents for almost 25 years.

He hopes moms and dads can learn from their findings.

“If you’re not looking at social media and understanding technology-mediated relationships, you’re not capturing what adolescents are doing anymore,” he said.

Prinstein said online behavior is reflected in how a young person acts in the real world. Their research showed one hour after adolescents logged off a social media site, they felt an increased feeling of loneliness, being less socially connected and a craving for more social connections.

“The way that you interact with peers online, you are not necessarily seeing facial interactions," Telzer said. "(You’re not) learning from trial and error, and how to interact with others. I think that this could probably do a lot more to transform how parents think about social media and how they allow their kids to use it.”

The center also provides a first-of-its-kind educational curriculum for middle school students nationwide, which explores the impacts of using social media and has been used by middle school teachers in Florida.

The original initiative was created in 2018.