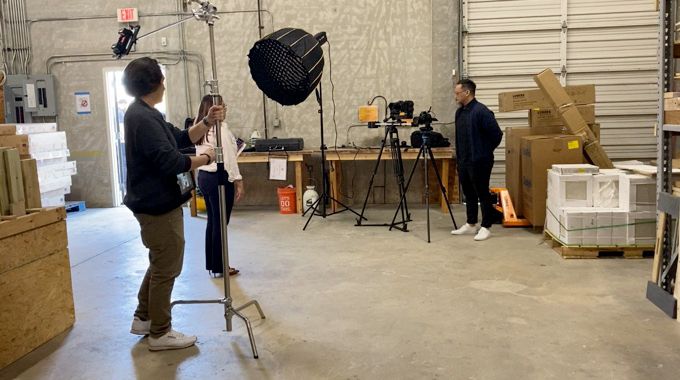 CHARLOTTE, N.C. — For the fifth year, the City of Charlotte is launching its program AMP Up to help small businesses.

It’s focused on building up businesses owned by people of color.

The program is run in partnership with Truist Financial and Interise, a national nonprofit that works to diversify the economic space.

In this program, business owners will complete Interise's StreetWise MBA curriculum and create a three-year strategic plan for growth, connect with mentors and more.

Eric Halili is a Charlotte entrepreneur who went through this program.

He owns Rebrand Lifestyle Group, which has two focuses.

One is on health and wellness, in light of the COVID-19 pandemic.

“I got an idea of being part of the solution as opposed to being reactive,” Halili said.

He says five years ago, his cousin Gino Bonifacio, found portable, electric handwashing stations. He owned 200 of them in the Philippines.

Halili had the idea to bring them to the U.S.

Once the pandemic hit, he received a grant from the Charlotte Center City Partners Small Business Innovation Fund to bring some units here.

He’s installed these stations in schools, food halls and even sporting complexes, such as the Chase Center in his native city of San Francisco.

They’re taking off too. He’s installing 13 more of these hand-washing stations in the executive offices of the Golden State Warriors, as well as their practice facility in Oakland, California.

The other part of his business is marketing and video content.

“Content in general became important after the pandemic, so we are seeing a lot of businesses come in that need our services,” Halili said.

He’s currently working with the city on profiling small businesses.

He moved to Charlotte in 2007, because he says he saw a lot of potential in the city.

“I looked at Charlotte during that time and thought, Charlotte’s cool," he said. "It’s kind of outdated a little bit, so all they need to do is rebrand and remarket themselves.”

That’s how he came up with the company name, Rebrand.

Halili worked full time in marketing for a local media company and for the longest time, he didn’t know how to turn his passion into a career.

"Throughout the years, you get stuck working and it becomes you, but you don’t run it like a company because you don’t know how,” he said.

He says going through Amp Up really helped him figure out the “how.”

“The last four, five years, I started looking at this like a business, and AMP UP accelerated that,” Halili said.

He completed the program last year and was able to create a three-year growth plan.

Halili only just quit his other job to pursue his company full time.

“So one thing I’ve learned to focus on what you are good at and build a team around you that are good, if not better than you, and that way you can do it as a team because you can't do it by yourself,” he said.

Interise’s Senior Director of Programs, Bernard Johnson says they focus on building leaders through confidence and helping them create a roadmap to success.

“And most importantly, thinking about different ways to leverage opportunities around access to capital, and true and real opportunities,” Johnson said.

Interise looked at 2021 national data and found that business owners who graduated from their program have reported an average annual revenue growth of 13% and garnered $327 million in government contracting.

Applications are open until Friday, April 1.

If accepted, you’ll begin on April 29.

For more questions, you can reach out to Anika Ellis at anika.ellis@charlottenc.gov.