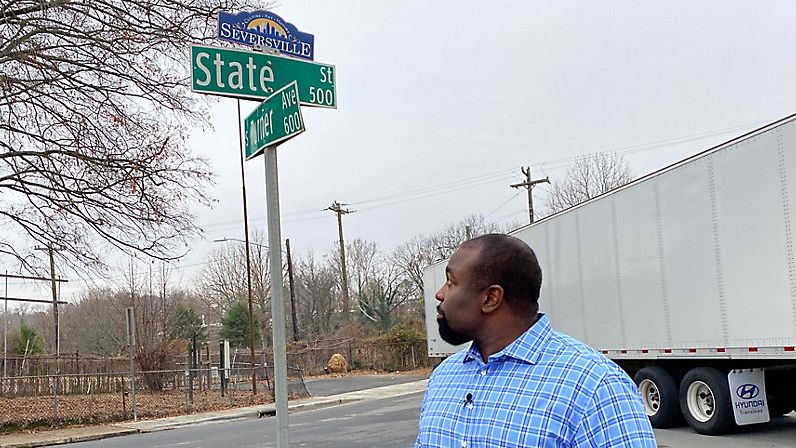 Seversville homeowners like Amar Johnson say it's time to change the name of their predominantly Black neighborhood. It's named after Henry C. Severs.

CHARLOTTE, N.C. — Amar Johnson cares about his West Charlotte neighborhood. As the president of the Seversville Community Organization, he wants his neighbors to care about it just as much as he does.

He moved in six years ago, mainly for the social life.

“I love this neighborhood, because it’s close to Uptown Charlotte. It used to be an all-Black community,” he said.

Historians say Seversville has transformed over the last 60 years, going from all white to mostly Black from the 1980s until now, which is why Johnson got so upset when he recently found out the origin of the name Seversville.

“Upon reading this article from the Charlotte News Observer written in 1931 discovered that Henry C. Severs was a Confederate soldier and the community was named after him, and that was something that did not sit well with me.”

The neighborhood was named after the Severs family. Henry C. Severs' father owned the land that's now known as Seversville, and a grocery store in the community.

So now, whenever Johnson sees that neighborhood sign, he’s reminded of the history behind it.

“I really do not like saying the word Seversville,” he said. “I try to focus on the future.”

The future for Johnson means renaming the neighborhood after someone who could represent him and the diverse community.

He kept a copy of that Charlotte Observer article on his laptop, which points out that Severs’ father, Henry F. Severs, kept a collection of Confederate memorabilia — “a lot of things that are disturbing,” he said.

Johnson says these relics might have been accepted during that time period, but it’s a slap in the face to still honor what they represent today.

“You realize that the land you’re living on or the community you’re living in is named after a person who stood for this type of things or supported these type of acts,” he said. “I don’t want to be associated with anything like that, and neither do the people of Seversville.”

But there are some people who don’t mind the name Seversville.

Sarah Griffith, a history professor at Queens University, says Henry C. Severs was a businessman and real estate investor, and his father bought the 70 acres of land in West Charlotte now known as Seversville. She says while many take grave offense to Severs' role as a Confederate soldier, others see it as an important part of the nation’s history.

On the other hand, Griffith says those symbols — like the Confederate flag — still represent acts of hate even today, and that’s why Johnson hopes to change his neighborhood’s name.

“Perhaps the most problematic issue is that so much of the white supremacy movement in the country — both past and present — has been associated with that flag,” Griffith said.

Johnson says the Seversville Community Organization has formed a committee to start the name-changing process.

That committee will take suggestions from property owners and nominate names based on research presented by local historians. Johnson says anyone who owns property can vote once the names are narrowed down.