According to authorities, Malek Moore was arrested around 1:35 p.m. on East Market Street in Greensboro. Police say Moore will be held without bond at the Guilford County Jail. 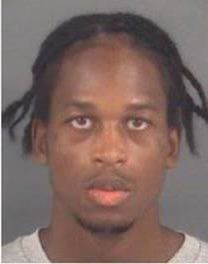 A news release from the Greensboro Police Department says 29-year-old Moore was wanted on a charge of first-degree murder in connection to the death of 21-year-old Christian Mbimba of Nashville, Tennessee, on Sept. 3 in Greensboro. Police officers found Mbimba's body in the street.

Moore was also wanted on a charge of first-degree murder in the killing of Gabryelle Allnutt, a 29-year-old artist who traveled to Charlotte recently to escape Hurricane Ida, Charlotte-Mecklenburg police say.

"Moore frankly is just a danger to the public right now," police said in a statement prior to his arrest.

Moore is suspected in other Charlotte crimes, including an assault on a greenway.

In addition to the murder charges, investigators said Moore was wanted on charges including kidnapping, burglary, larceny and breaking and entering.