WINSTON-SALEM, N.C. — Mount Tabor High School leaders spoke about heading back to class and how they are trying to heal as they continue to grapple in the aftermath of a shooting that left a 15-year-old student dead last week.

"Students did an amazing job yesterday," Tricia McManus, school district superintendent, said of kids returning to classes Tuesday for the first time since the incident.

William Chavis Raynard Miller Jr. was shot at the Winston-Salem school one week ago, on September 1, and died after being taken to a hospital, authorities said.

Forsyth County Sheriff’s Office officials said deputies arrested the suspected shooter around 6 p.m. September 1. At a news conference the next day, the Forsyth County District Attorney hinted that the incident may have been gang-related.

"We're trying to create a day-by-day and normalcy for our kids," Principal Ed Weiss said of getting back to the school year, which had only just begun.

He said crisis teams and counseling teams have been present to help everyone as they try to move on from the events that unfolded that day, which sent the school into lockdown for a number of hours. Concerned parents and traffic clogged nearby student meeting and pickup spaces off campus, as authorites made sure everyone was safe.

Several school leaders spoke Wednesday morning at the news conference and offered their thanks and appreciation for the outpouring of support they've received from the community.

Weiss said they are all taking "baby steps" toward getting back to normal and healing from the trauma of that day.

Officials asked that everyone continue to keep Miller's family in their hearts and prayers.

Leaders said they could not offer updates on the case itself. During a news conference last week, officials said they believed the suspect was a student at the school.

Student body president William Burns spoke Wednesday morning and also thanked the community for their support and said the school would get through this time by leaning on one another. 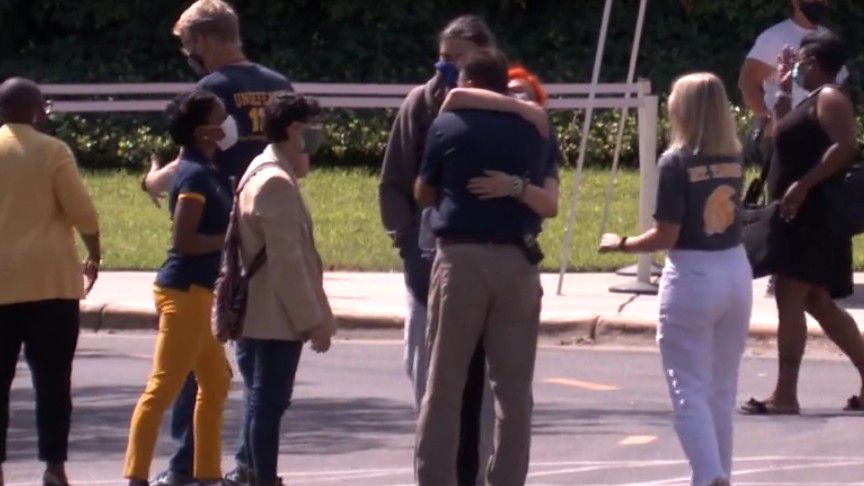 Mt. Tabor High students returned to campus Friday, Sept. 3 after a deadly shooting Sept. 1. Students went back to pick up their belongings and vehicles.

Superintendent McManus said that school leaders are still reviewing the response to last week's shooting and assessing how things went. She said it's possible changes in their procedures could happen, but said it was still too early to say as meetings about the incident are still taking place.

She said what security looks like moving forward is something being discussed, and she wants students and parents to be a part of those talks. She did not outline any specifics on possible changes, but said everything was still being evaluated.

McManus did highlight the need for more resources to be put into student service staff, such as additional state funding for more student counselors.