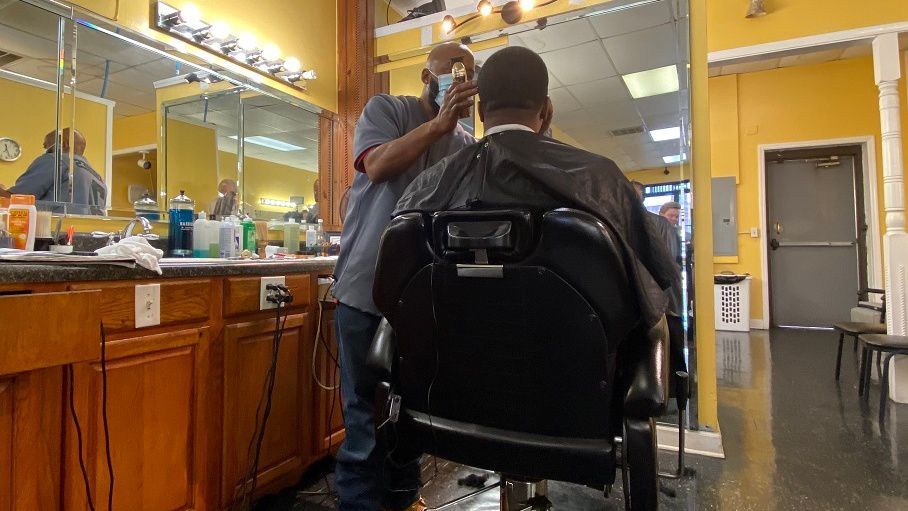 A year after George Floyd's death, what changed?

The image of Derek  Chauvin's knee on George Floyd’s neck has circulated around the globe for the past year. We have all heard him mutter the words "I can't breathe" on the asphalt of a Minneapolis street because strangers used their phones to record what was being done.

The gruesome video of how he died shaped protests across North Carolina. In Fayetteville, it lit a literal fire on the Market House — a building known as the focal point of the city where goods were sold, and at one point, slaves were auctioned.

Conflict around the national historical landmark dates back to the Civil War — when troops were marching on the same stretch of road where activists now gather almost 200 years later.  Floyd’s death didn’t bring the mixed history of the market house to light all of a sudden. According to one activist living in the community, Mario Benavente, it metaphorically shattered something already broken for people who were already mad.

Benavente says, “Unless we are completely open about the history of the Market House we are going to continue to have problems about exactly what it represents. There are some great things about it, and certainly, a lot of difficult conversations we need to have about it.”

Benavente grew up in Fayetteville and says when he moved home after graduating from college, he didn't feel like the history of the landmark was ever really discussed.

The way Floyd died amplified unrest and eventually led two men to set fire to the cultural fixture on May 30, 2020. Although it is not the kind of action he would like to see, Benavente says he loved seeing people stand side by side day after day to camp outside the brick-layered reminder of enslavement in the past. He says getting soldiers for the cause to march the streets of Fayetteville has a greater significance because Floyd was born there.

Benavente said, "We have something to say here in Fayetteville, and I want to make sure everyone knows that we are not going to be on the sidelines for things like this. It was actually a really inspiring moment in a lot of ways."

#GeorgeFloyd #OneYearLater
This is one of my favorites by Jonny Castro. He's an Officer and Forensic Composite Artist for Philly PD. A year ago he told me he typically paints portraits of officers killed in the line of duty but made an exception for George Floyd. @SpecNews1RDU pic.twitter.com/lKS6yYfUre

The reasons some of those protests that set the building on fire are part of the anger and frustration seen around the country at Floyd’s death. Some of those emotions and sentiments were shared at a local barber shop called Premier Kuts. Owner and barber Torrance Rhodes says progress has been made and more work needs to be done.

Rhodes said, “A barber shop has a whole bunch of stuff people want to talk about.  Whatever the topic is they are actually going to share their thoughts and get different opinions.”

Rhodes says it is not a bad place to gauge the pulse of the greater Black community either. When people take a seat in his chair, they let him know what’s on their minds.

Rhodes said, “Sometimes people just come to have that dialogue and talk.”

One of the customers who comes to do that more than once a month is Devon Binyard. Binyard calls the barber shop an enjoyable escape. Binyard said, “It’s like a clubhouse where men meet.”

They each describe it as an open forum for conversations you can’t have at church or home. No issue or topic is off limits, and you can freely share your opinion in a place where you can talk how you want about the topic being discussed.

It’s also a chance for men of all backgrounds to talk about what it's like to be Black in America, a year after Floyd was murdered.

Rhodes said, “Even though it’s over with, it probably isn’t over with because stuff still happens.”

Rhodes says it only feels more real to the outside world because Chauvin’s brutal killing of Floyd was recorded with cell phone cameras. Rhodes said, "(This) has been going on, the camera (is) just making everybody know now.”

Rhodes and Binyard say violence against Black men at the hands of white police officers has been a common trend.

Statistics back up their argument. The research and advocacy group, Mapping Police Violence, reported Black people are three times more likely to be killed by police than white people.

Binyard said, "When I see things like this it makes me be more vigilant.”

Binyard considers Chauvin's conviction on April 20 of this year a drop in the bucket.

Maybe it’s because Andrew Brown Jr. was shot and killed by deputies with the Pasquotank County Sheriff’s Office one day later.

Binyard said, “It is different as a Black man. I don’t feel like I am overstressing it because of what the media is putting out.” Binyard says what he means is that just because more people know these incidents can happen to Black men at any time doesn’t take away from how many times it happened when cameras weren’t rolling.

So almost a year later, what is one bright spot?

Rhodes says it’s simple: videos taken by cell phones do beam out atrocities for the world to see.

Rhodes said, “Now you get to see it. Before now, if it wasn’t caught by (a) camera that was on somebody’s business, then nobody ever knew.  It was just their story. Now, a cell phone makes everybody see it.”

If you thought video would stop these incidents, data indicates the opposite is true.

Mapping Police Violence also discovered police officers have killed more than 1,000 Americans since the killing of Floyd on May 25, 2020.

Binyard wants to believe some day in the future these statistics will improve. Binyard said, “Change is gonna come, but it is going to be gradual.”

For that to happen, Binyard says white people have to step foot in Black neighborhoods long before they become men and women in blue.

Binyard said, “You are able to understand that neighborhood and the people that you are dealing with and associate yourselves with them.”