WILMINGTON, N.C. — Signs of rising sea levels can be dramatic on the North Carolina coast. Stronger storms push storm surge up into oceanfront communities like Ocracoke, breaking records as the sea washes through the dunes, through homes and businesses, making the barrier island almost uninhabitable.

North Carolina is already seeing the effects of sea-level rise along the coast. This three-part online series from Spectrum News 1 will explore what the state is seeing already, what it can expect to see, and what North Carolina’s coastal communities can do about it.

“Things are different today than they were 10, 15 years ago,” said Reide Corbett, director of East Carolina University’s Coastal Studies Institute on Roanoke Island.

"Today, the main driver of sea-level rise is a global phenomenon with warming temperatures, warming ocean, more water making it into the ocean associated with melting glaciers. That’s the big driver today," he said.

North Carolina has 300 miles of ocean shoreline and another 1,200 miles of coastline along bays and inside the barrier islands.

“That 300 miles of oceanfront shoreline is critical, that’s where we're seeing that front line, where we’re seeing a lot of changes on the coast. But we’re also seeing changes right at these marshes, these critical wetlands,” Corbett said.

In northeast North Carolina, the sea is rising at a rate of about 4.5 millimeters each year. In Southport, on the southern end of the state’s coastline, the rate is about 2 millimeters of sea-level rise per year. But Corbett and other scientists agree that the rate will likely increase in the decades to come.

By the end of the century, sea level along the East Coast could rise by anywhere from a foot to more than eight feet, depending on how the world deals with climate change and cutting carbon emissions.

“It’s already affecting us in North Carolina and the science is pretty clear that the trend of our sea levels rising is going to continue and it’s something we’re going to have to prepare for and adapt for,” Spectrum News 1 meteorologist Lee Ringer said.

People often talk about what sea level rise means for the future, but the impacts are already visible on North Carolina’s coast.

During the highest tides, called king tides, water seeps up from storm drains along Wilmington’s Water Street, pushing the Cape Fear River into the road. People in towns up and down the coastline, in Beaufort, Oriental and Duck, are starting to deal more and more with this type of “sunny day flooding” spilling into low-lying roads.

This kind of tidal flooding in cities like Miami, Charleston, South Carolina, and Norfolk, Virginia, has become more than just a nuisance, causing damage and forcing people to detour from their usual routes to work or school during high tides.

The tides are easy to forecast, driven by the moon cycle and the winds. But there’s little people can do to stop them without big public investments.

Things aren’t that bad in North Carolina, but scientists say those kinds of disruptions could be coming. 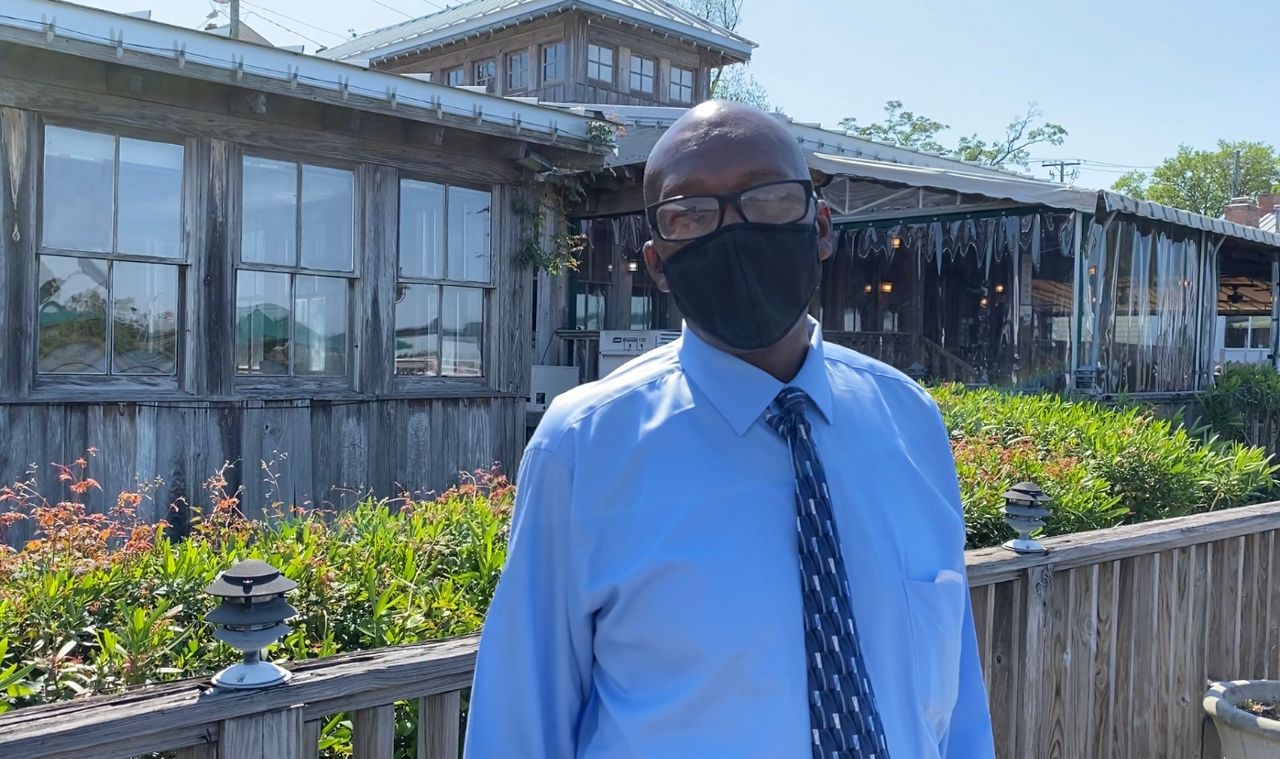 Vincent Drayton, general manager of Elijah's Restaurant in Wilmington, says they had to raise the air conditioning units for the waterfront restaurant. (Photo: Charles Duncan)

Elijah’s Restaurant is a landmark on the south end of Wilmington’s riverfront, higher than their neighbors down the street where tidal flooding has become a predictable nuisance.

Elijaj’s general manager Vincent Drayton is a Wilmington native who has worked in the city’s fine dining scene for 30 years.

“High tides do affect us. We’ve made changes to prevent equipment being destroyed by high tides,” Drayton said. But he said they are high enough about the river that the water never gets into their dining room or parking lot.

Standing on the restaurant’s deck over the Cape Fear River, Drayton pointed to the restaurant’s air conditioning units, which they had to put on platforms to keep the equipment away from rising tides, especially when the river is running high.

The restaurant also had to move the duct work from under the building because water started getting into the system when the river gets to its highest with a combination of rain and tides, Drayton said. But, he said, the water has never gotten high enough to get in the dining room or on the dock where diners can enjoy dinner while watching the sunset over the river.

But the high tides that bring water up on the Cape Fear River are forecast to keep getting worse.

Researchers with the National Oceanic and Atmospheric Administration say Wilmington could see anywhere from 15 to 65 days of high tide flooding each year by 2050.

“We have pretty good evidence that they should get, in 2050, in 2075, in 2100, you start to see these areas going underwater on a weekly basis, maybe even each high tide as you get far enough out,” said Rick Luettich, director of the University of North Carolina’s Institute for Marine Sciences in Morehead City. 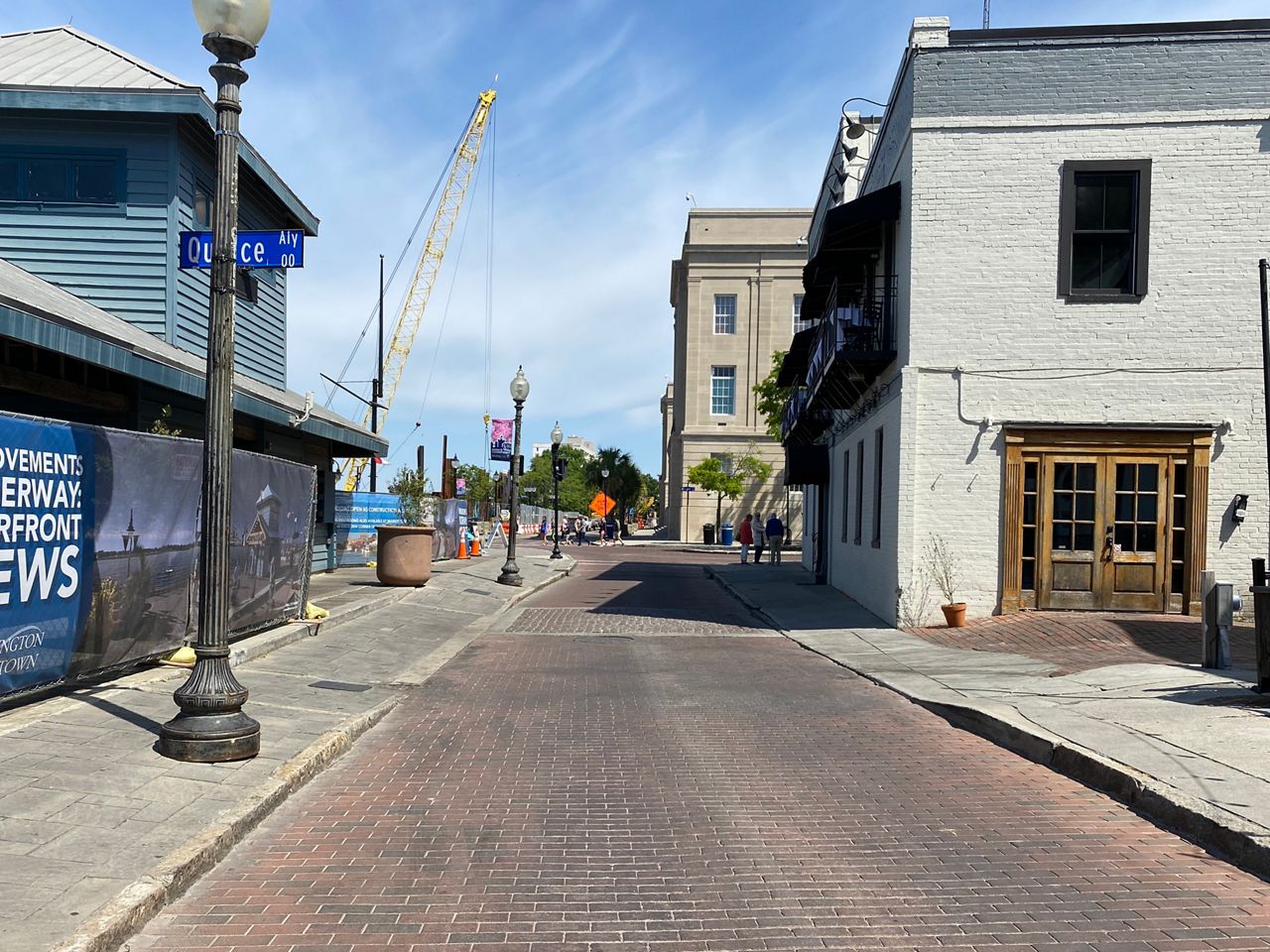 The riverfront in Wilmington could see anywhere from 15 to 65 days of high tide flooding each year by 2050, according to NOAA. (Photo: Charles Duncan)

“All of a sudden, places that were traditionally dry are occasionally wet,” he said. And in the future that’s going to happen more and more.

In Wilmington, Leuttich said, “Over the course of the next 50 years or so, the projections are that they could start seeing high tide flooding on almost a daily basis, say a weekly basis in some areas along the waterfront.”

Along Beaufort’s scenic waterfront, where tourists can catch glimpses of the wild horses on Carrot Island, king tides are forecast to become more and more of a problem.

NOAA forecasts between six and 15 tidal flood days a year by 2030. By 2050, NOAA forecasts anywhere from 25 to 100 days of flooding from high tides each year.

Further north, in Duck on the Outer Banks, NOAA says the town will likely see 20 to 30 days of tidal flooding by the end of this decade. By 2050, that number goes up to 50 to 135 days of sunny-day floods each year.

This animation uses satellite images to show changes in tree cover across 245,000 acres in the Albemarle-Pamlico Peninsula over 35 years, from 1985 to 2019. Green areas represent healthy forests. Red areas have a high density of dead trees. (Image from NASA/USGS, courtesy Duke University)

Traveling east from central North Carolina to the Outer Banks, most people will pass over the Albemarle-Pamlico Peninsula, the last low-lying stretch of mainland before crossing the bridge to Roanoke Island.

The peninsula is dense with forest and marsh, part of the Alligator River National Wildlife Reserve. But along the marshes are swaths of dead trees, hundreds stripped of leaves and branches, many no longer standing. These are ghost forests: areas where storm surge and rising sea levels have brought salt water into dry land, killing off the vegetation.

Ghost forests are becoming more common along North Carolina’s coast as salt water spills into what was once dry land. A new study from researchers at Duke found they could see from space how fast the ghost forests are expanding.

Using satellite images, the team found that from 1985 and 2019, 11% of the peninsula’s forested area had turned into ghost forest.

Duke Professor Emily Bernhardt, who worked on the study, called the peninsula “the leading edge of climate change,” according to the university.

“Forest losses were greatest in the eastern portion of the refuge closest to the Croatan and Pamlico Sounds, but also occurred much further inland in low-elevation areas and alongside major canals,” according to the study, published in the journal Ecological Applications.

“These unprecedented rates of deforestation and land cover change due to climate change may become the status quo for coastal regions worldwide, with implications for wetland function, wildlife habitat, and global carbon cycling,” the study said.

The salt water is also making its way up the canals and ditches, once cut through the marshes to drain the water out in the mid-1900s, according to the study.

Corbett, who works just across the sound on Roanoke Island, said he’s been taking classes to see the ghost forests for about two decades now, but they continue to grow.

“Ghosts forests are a product of increased inundation, increasing salt,” he said, and based on all the forecasts and models, the salt water will continue to push inland and change the landscape along the coast.

The highest storm surge ever recorded on Ocracoke Island came from Hurricane Dorian in 2019.

“When it comes to tropical systems and hurricanes, sea-level rise is just going to add to the storm surge that we have from these storms and we’ve already seen examples from that,” he said. “We’re definitely seeing an increase in these hurricanes that are creating this higher storm surge that can be linked to sea level rise.”

NOAA researchers say hurricanes are getting more dangerous because of rising sea levels, but also because climate change is likely leading to stronger storms.

“When we get big storms, and if you live along the coast you know that we’re going to get a big storm eventually, it makes the impacts of those storms all the worse because it brings the baseline water level up higher and higher,” UNC’s Rick Luettick, in Morehead City, said.

Corbett, farther north on Roanoke Island, said, “You look at the last five years or so and consider the storms. What you’ll hear from people is, ‘It never flooded like that before. Water never made it that high. I’ve never had water in my house before.’”

“Those anecdotal type things that you hear throughout the community is a direct indication that things are different, waters are higher,” he said.