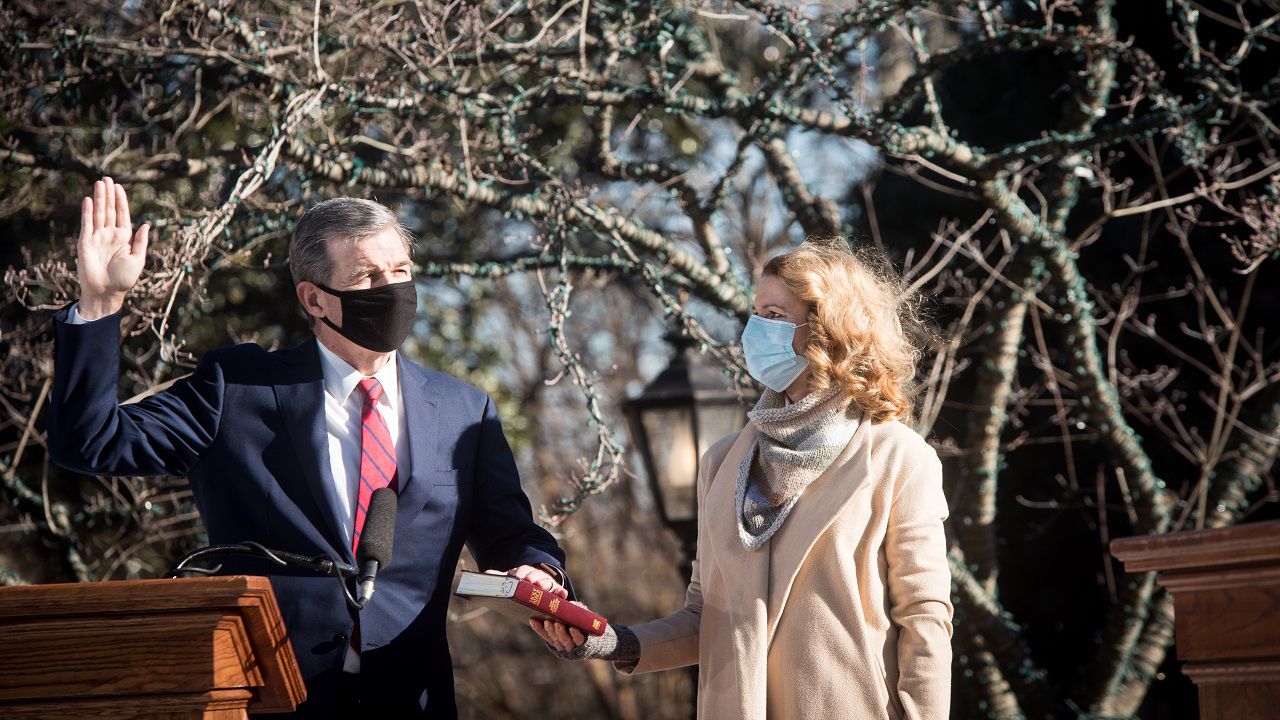 Gov. Roy Cooper is sworn in as governor for his second term alongside his wife, Kristin, on Saturday. Photo by Kate Medley

Cooper: “The Lessons We've All Learned Must Usher in a New Era”

RALEIGH, N.C. – The trials of the past year hung heavily over Saturday's inauguration festivities.

In deference to the COVID-19 pandemic that has already killed more than 7,400 North Carolinians, there were no parades, no live performances, and no crowds of supporters and family. Instead, an hour long ceremony was broadcast with pre-recorded musical selections. Each of the Council of State members took their turns taking their oaths of office from Chief Justice Paul Newby, with Gov. Roy Cooper the last to take his oath, around 10:30 a.m.

In a roughly seven-minute inaugural address, Cooper drew parallels with the problems facing North Carolina in 1921, when Cameron Morrison became governor. Cooper noted then, as now, North Carolina was still battling the devastating Spanish Flu pandemic. Once the pandemic passed, Cooper said North Carolina's economy boomed with new manufacturing jobs. That allowed many North Carolinians to buy cars for the first time, which in turn led to a need for good roads.

“A century later, that cycle of challenge and response confronts North Carolina yet again,” he said. “We are living it. We can see it, and we can solve it.”

Cooper said he would focus on recovering from the pandemic and ensuring access to education and health care. That is likely to set up further confrontations with the Republican-led General Assembly. North Carolina has been without a budget for almost a full two-year fiscal cycle now due to the governor's disagreements with state lawmakers over teacher pay and expansion of Medicaid coverage. Republican leaders have balked at his proposals over budgetary concerns.

In a nod to Wednesday's attack on the U.S. Capitol by a pro-Donald Trump mob, Cooper said it's time to learn how to acknowledge and work around our differences without focusing on ideology at the expense of truth and facts.

“Let's cast aside notions of red counties and blue counties and recognize that these are artificial divisions,” he said. “Let's place integrity at the forefront.”

Cooper is only the fourth governor in the state's history to take the oath of office for a second consecutive time. Fellow Democrat Jim Hunt did it twice, in 1981 and in 1997, while Republican James G. Martin and Democrat Michael Easley each were re-inaugurated once.