Between the 2012 and 2016 elections, a handful of North Carolina counties flipped from backing the Democratic presidential ticket to the Republican ticket. Only one county moved in the opposite direction.

What caused these shifts?

With polls showing North Carolina as a toss-up in the 2020 presidential race, the answer to that question could help illuminate what to expect come November.


Which Counties Flipped and Why?

Of the North Carolina counties that backed the Democratic Obama-Biden ticket in 2012, seven flipped to back the Republican Trump-Pence ticket in 2016: Bladen, Gates, Granville, Martin, Nash, Richmond, and Robeson. 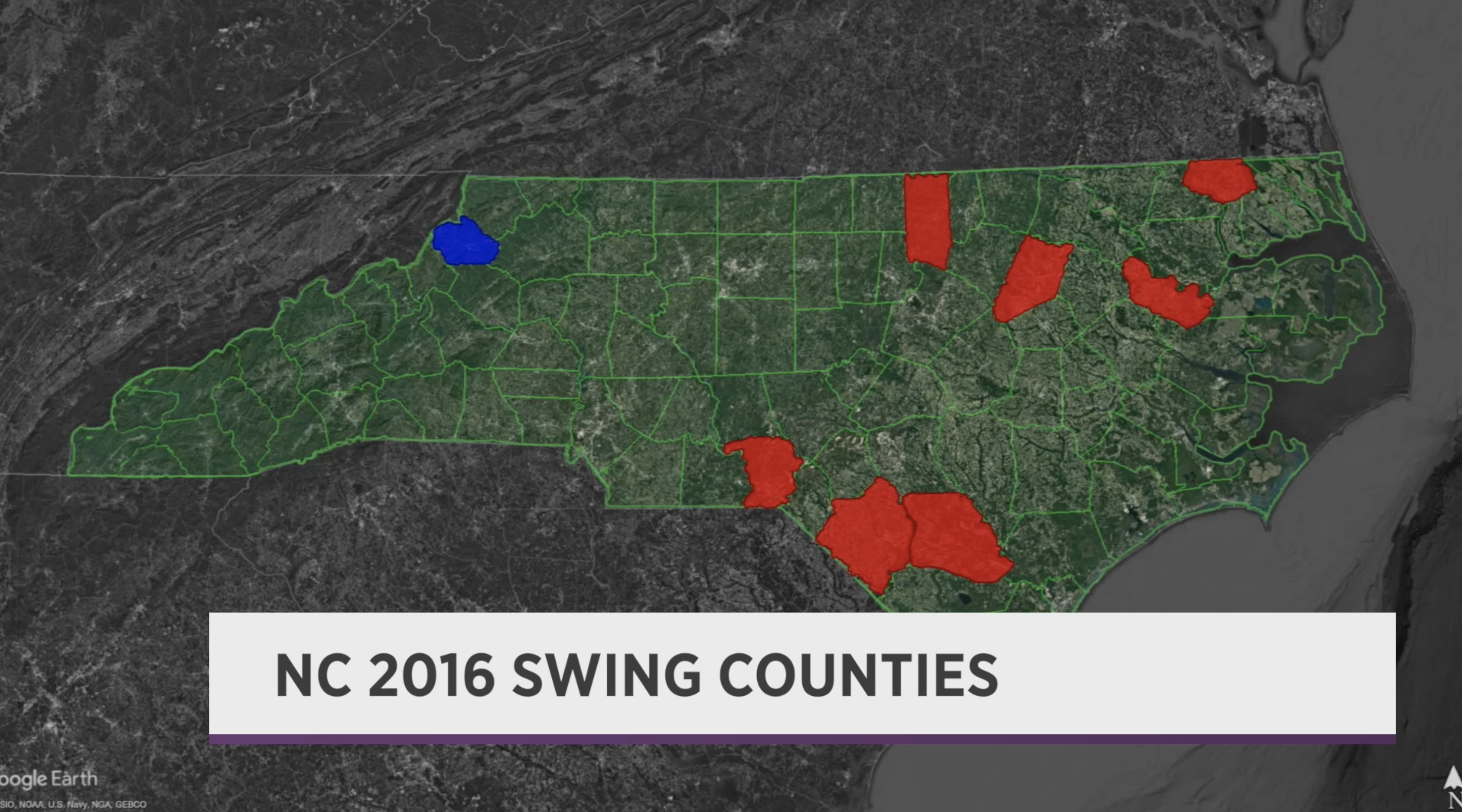 Prof. Michael Bitzer, who teaches political science at Catawba College, says a few factors may be behind the blue to red shift.

For starters, many of the counties that turned red in 2016 are more rural. Across the country, there is a noticeable political divide that might apply here: rural areas are bending Republican while urban areas grow more Democratic.

Another potential factor at play: who showed up at the polls and who did not.

“In 2016, a number of those counties saw drop off in black voters turning out. Certainly white voters did increase their turnout rates, so that kind of dual action really helped to flip some of those key rural communities,” Bitzer said.

What remains unclear, Bitzer says, is whether Democrats recognize that shortfall and if they can generate greater participation among Black voters in 2020 than four years ago.

Robeson County is one of the counties that flipped from blue to red between the 2012 and 2016. The Trump-Pence ticket did 10 percentage points better than the Romney-Ryan ticket four years prior.

In a 2019 interview, the county’s GOP chairman, Phillip Stephens, said that Trump’s ‘tough-on-trade’ message likely resonated in the county, which has struggled economically.

But now, with unemployment up nationwide amid the coronavirus shutdowns, will that economic message still work in 2020?

Stephens argues that it will, saying voters now face a choice of which candidate can bring back the economy, and he believes voters will still pick Trump.

“The coronavirus has simply taken us back to like the top of what the administration started out with,” he said. “The question now becomes who's the best one to get us back to the economic progress we saw pre-COVID?”

In Nash County, which also flipped red in 2016, local Democratic leaders say they are trying to boost turnout, including among younger people.

The Trump ticket bested the Clinton ticket by less than half a percentage point there in 2016.

“Nash County has an opportunity to make a difference for North Carolina if we all get out and vote,” said Robin Latham, president of the Nash County Democratic Women organization.

The head of the county GOP meanwhile is hoping to keep Nash County red. He says his party has benefited from the Trump campaign being, in his words, more organized than four years ago.

“Since 2016 -- the Trump folks behind the scenes have been getting ready for 2020 … and it really is paying off,” said Mark Edwards, chairman of the Nash County GOP.

Look west and you’ll find the only North Carolina county that, in 2016, moved into the blue column: Watauga.

On the campus of Appalachian State University, enthusiasm for the election is mixed.

“I’m excited, for many different reasons, but I really want to see everything to go out in the right way,” said Sofia Rohlman, a freshman.

“I think it's probably the most interesting we’ve had in recent years cause neither candidate is really preferable over the other,” said Zach Roberson, a freshman.

Lee Franklin with the county’s Democratic Party says expect the results there to be close, but he did strike an upbeat tone.

“This is the most energy we've ever seen for Democrats in Watauga County ever before so I fully expect strong support for Vice President Biden,” Franklin said.

A big reason for that energy, he argues, is the current occupant of the Oval Office.

This story is part of a series called “Battleground 2020: North Carolina,” which follows up on a 2019 Spectrum News 1 series looking at the state of play in North Carolina ahead of the election.