Raleigh’s Downtown South Project Gets Rezoning Green Light. It Could Reshape the City

RALEIGH, N.C. — A 140-acre project on the south side of downtown Raleigh could include a stadium and entertainment complex, 40-story towers and 12 million square feet of office space.

Raleigh’s city council members approved a rezoning for the project Thursday. The $2.2 billion Downtown South development could reshape the city.


The city council approved the rezoning with one member, David Cox, voting against.

“Is this project perfect? I’m going to tell you, it’s not,” said council member Corey Branch, who represents southeast Raleigh. “If we wait for a perfect project, as some of the elders would say, ‘we’ll be waiting for the roosters to come home.’”

People have been talking about a stadium in this part of the city for more than a decade.

Parts of south and southeast Raleigh have struggled economically for a long time. The tension for a big project like this is the question over whether it will bring gentrification and chase longtime residents out of the area.

The project still has a long way to go before developers start building. But the zoning change gives Kane Realty what it needs to move forward to figure out the details in the new development.

The new zoning allows buildings up to 40 stories on part of the property and up to 20 stories in other areas. The height limits are lower on the edges that are next to neighborhoods. 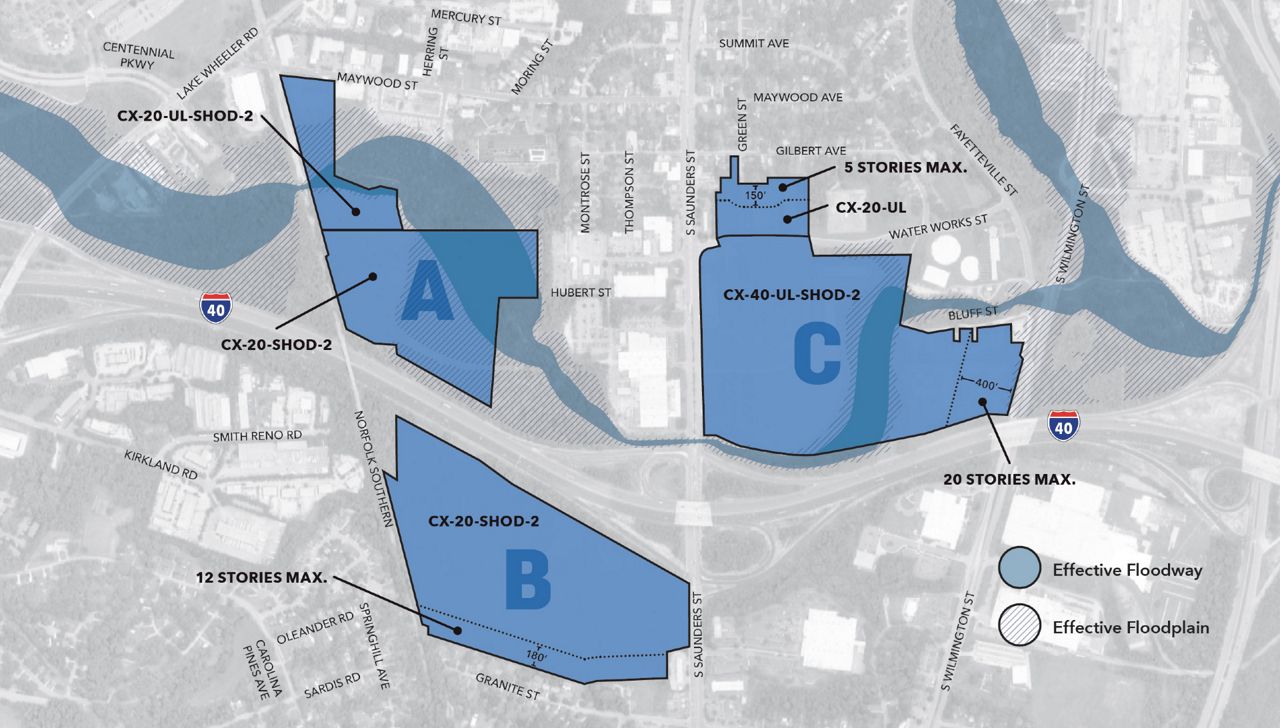 Kane Realty’s Bonner Gaylord, himself a former city council member, said he did not think the development would hit those limits for units and square footage, but would not commit to lowering those numbers.

“We’re not planning on hitting those maximums. Whether that happens in 50 or 75 years, I don’t know the answer to that,” Gaylord said during the public hearing this week.

The city’s planning commission voted unanimously to reject rezoning the property. Commission Chair Matt Tomasulo said they rejected the plan after 15 hours of meetings looking at all the details and taking public comments.

They ultimately decided the plan did not meet the requirements in the city’s comprehensive plan.

The developers have also asked the city for a tax increment grant, which Raleigh has never done before.

The grant money would help pay for the stadium, affordable housing and other things like stormwater infrastructure.

“It needs to have a significant draw that brings in people and money and creates sustainable businesses,” Gaylord said. “Without a stadium, the project would be much lower density, likely have more surface parking, less walkable, less everything.”

“We believe that the community deserves that full vision,” he said.

The city council has an agreement with Kane Realty to take up a tax increment grant for the project, but that’s far from finalized. The city council plans to start debating the grant in the new year.

A tax increment grant would allow the developers to pay the same property taxes on the finished development as sites are assessed for now. A major development like this would be expected to greatly increase the tax value on the site.

The developer would keep the difference from the current tax value and the future value to cover the cost of things like the stadium and adding affordable housing.