Offshare wind could end up being a key part of powering North Carolina's future as the Utilities Commission finalizes its plan to make energy production carbon neutral by 2050. (AP)

Will North Carolina get offshore wind farms? Right now it’s up to one state commission

There’s a swath of ocean just over the horizon off Oak Island, in the southeast corner of North Carolina, that one day could be home to hundreds of towering offshore wind turbines. The project, federal regulators say, could produce as much power as Duke Energy’s nearby Brunswick Nuclear plant.

Duke Energy won the rights to build a wind farm in one of two leases off the coast of Brunswick County and Myrtle Beach, called the Carolina Long Bay area. The company said that lease is not part of the sale it announced recently of its renewable energy business.

This is all part of a plan, passed last year by the General Assembly, to reduce carbon emissions from power companies by 70% by 2030 and make power generation carbon neutral by 2050.

But how that works, and what role offshore wind plays in North Carolina’s clean energy mix, is now in the hands of the state Utilities Commission. The commission, which oversees North Carolina power companies, has been taking comments and proposals for months.

“We know the absolute earliest we’ve seen anyone projecting offshore wind is in the 2030 timeframe,” said Katherine Kollins, a wind industry advocate who leads the Southeast Wind Coalition. “That still is a lot of lead time, more than I would like.”

The Utilities Commission has a Dec. 31 deadline to release a carbon plan for North Carolina’s power producers. That includes deciding on the mix of power generation for Duke Energy.

“Offshore wind is included in 6 out of 8 scenarios in our proposed North Carolina carbon plan and could help support our carbon reduction goals if the North Carolina Utilities Commission selects offshore wind as part of its final carbon plan,” Duke Energy spokeswoman Jennifer Garber said in an email.

“If we want to see offshore wind developed, it’s got to be in the carbon plan,” Kollins said.

Duke Energy recently announced the sale of its renewable energy business, which includes big wind farms in places like Texas and Wyoming. Garber said the new lease for offshore wind off North Carolina is not included in that sale.

Offshore wind has long been part of generating power in parts of Europe and Asia. But it’s a new industry for the United States. The first big East Coast project, off the coast of Massachusetts, has faced problems in recent months with rising prices and supply chain issues.

“What we’re seeing in terms of supply chain shortages or inflationary pressures or various things happening with other projects in the northeast, I don’t think the North Carolina projects are impacted in the same way as those,” Kollins said, mainly because construction on any wind farm off North Carolina is still years away.

Long term, those supply chain issues present an enormous opportunity for North Carolina and other East Coast states. Most of the components for these massive wind turbines are made overseas. With the industry looking to grow on this side of the Atlantic, companies are looking for places to build the components here. 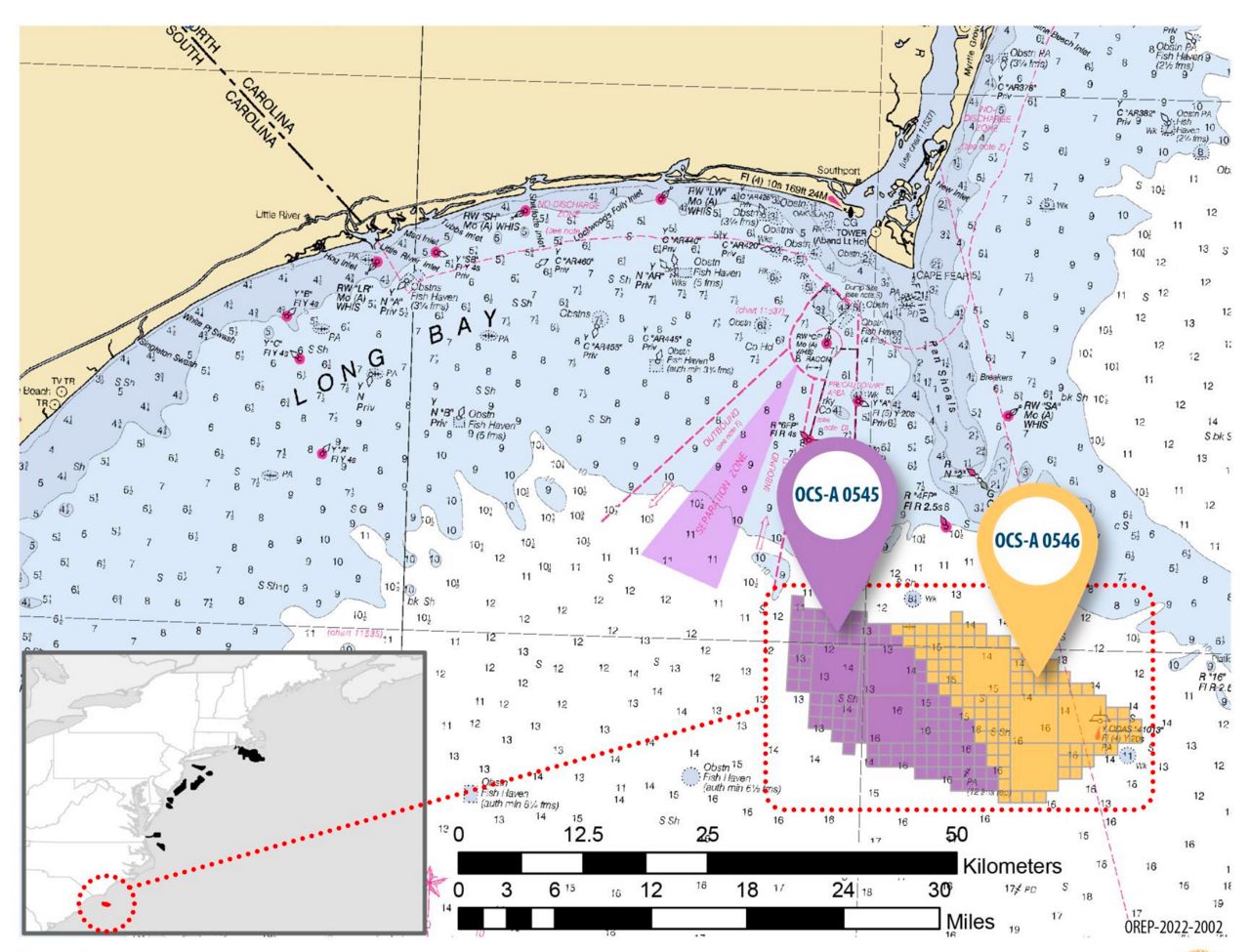 The East Coast could see the offshore wind industry invest $140 billion by 2035, according to a North Carolina Commerce Department report released last year.

“Wind energy means new jobs for North Carolinians,” North Carolina’s Commerce Secretary Machelle Sanders said at the time. “Just like biotechnology was for us many years ago, today clean energy represents an industry of the future and North Carolina always embraces the future.”

The state is already identifying sites where the offshore wind industry can manufacture the components. The towers stand hundreds of feet about the ocean surface and the blades alone can be up to 350 feet long.

The Commerce Department has already identified sites along the coast where companies could move in to help build all the components and equipment needed to construct these big offshore wind farms.

North Carolina’s offshore wind advocates are now in a waiting game, with the critical report from the Utilities Commission due out by the end of the year.

A group of 45 scientists recently sent a letter to Duke Energy and Gov. Roy Cooper asking that natural gas not be included in the state’s carbon plan.

“Such plans are completely out of step with the science reflecting the urgent need to phase out fossil fuels, and with North Carolina’s efforts to help slow the climate change that has increasingly harmed thousands of state residents,” the letter states.

“This would lock in costly new infrastructure that will emit both methane and carbon dioxide for decades, worsening the climate crisis and directly harming public health as methane emissions lead to formation of toxic ground-level ozone,” the group of environmental scientists said.

“Duke Energy indicates that it hopes to someday convert power plants from burning gas to burning hydrogen but admits that this is quite speculative,” the letter states.

“One of the biggest concerns is there’s a lot of reliance on unproven technologies, yet to be proven technologies in the carbon plan,” she said. “Those could be pushing offshore wind out of the picture unnecessarily.”

Another possible idea is for small-scale nuclear power plants, but those are still in the testing phase.

“This is not a market that’s established in the U.S. And the assumption is that those reactors could be placed on brownfield sites where you’ve already got access to transmission,” Kollins said.

“What we haven’t dealt with is issues around environmental justice. If what you’re doing is closing down a coal plant and removing those air emissions, are the same folks who live around that coal plant going to say, ‘yes it’s cool for you to put up a nuclear power plant next to my house’?” she said.

“We have no clue what the cost of these are going to be because we have no commercial examples in the world,” Kollins said. “Offshore wind, you’ve got 35 gigawatts already installed around the world. We know how to do that. We know what the permitting challengers are, we know what the operational challenges are.”

Now it is up to the Utilities Commission to decide where offshore wind will fit in the mix to power North Carolina into the future.