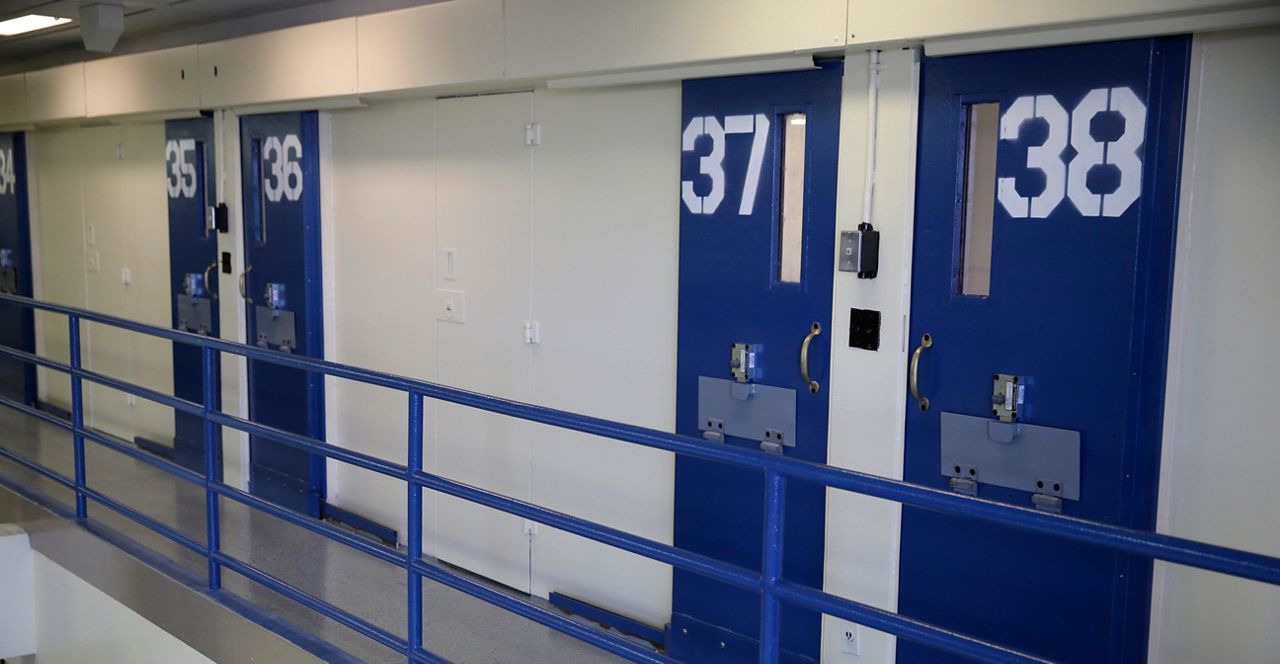 Prison staff and advocates continue to butt heads over the use of solitary confinement in New York and the reason for increased violence in prisons after the HALT Act took effect this spring.

The Humane Alternatives to Long Term Solitary Confinement, or HALT Act, caps the amount of time a person in New York's prisons or jails can be held in segregated confinement housing to 15 days, or 20 days over a two-month period. Officers and incarcerated people continue to clash over the law's implementation since it took effect April 1, and a lack of staffing and resources increasing difficulty for success.

The New York State Correctional Officers & Police Benevolent Association (NYSCOPBA) union is holding rallies across the state every day week, calling for lawmakers to repeal the HALT Act and drawing attention to an increase of violence in state prisons and reduced morale among staff.

About 75 people attended the three-hour rally adjacent to Coxsackie and Greene correctional facilities. Dozens of vehicles and tractor-trailers honked their horns at the group as they passed by.

Union members are urging Democrats who control both houses of the state Legislature to listen to and address their concerns.

Representatives with the state Senate and Assembly Democrats did not return requests for comment about support in the majority to change the law, and did not answer questions about potential support for proposed legislation to study prison violence.

The state correction officers' union credits HALT for reducing disciplinary action and fueling a rise in attacks on staff.

The state Department of Corrections and Community Supervision said its data on assaults in prisons doesn't have to include physical injury, which activists say can skew data.

But the department reports 1,067 assault incidents since HALT took effect four months ago — a 27% increase in incidents since the four-month stretch prior to the law taking effect.

DOCCS reports the data in a way where it’s impossible to know how many injuries occurred per incident, but 74 staff suffered moderate, serious or severe injuries after responding to or being involved in an assault since HALT took effect. That’s up from 35 staff moderately, seriously or severely injured during the from December through March.

"HALT will never be repealed because New York will never again sanction the use of torture," said Salazar, who chairs the Senate Crime Victims, Crime & Correction Committee. "While the harmful impact of prolonged solitary confinement is well-documented, there is absolutely no basis to conclude that any alleged increase in violence within New York's prisons is the result of HALT. Instead of rallying their members to promote the use of torture, it would be more constructive, as well as more protective of their members, if NYSCOPBA would focus on supporting alternative methods to addressing violence within New York's prison system."

Jerome Wright spent three decades in 18 New York prisons for a murder he committed at the age of 18 in the late 1970s. He spent nearly eight years in solitary confinement, with his longest stint at two-and-a-half years.

Wright regularly speaks with incarcerated people who have refused expanded programming under HALT because it requires remaining shackled to a chair for several hours.

"The overarching theme is that the department continues to take amenities and privileges from the population and they continue to blame it on HALT," said Wright, an organizer with the #HALTsolitary campaign. "They're fomenting an environment of violence so that they can justify an attempt to repeal HALT."

The HALT Act created Residential Rehabilitation Units and increased programming for people in prison who need additional intervention after 15 days in segregated housing. Incarcerated people housed in RRUs are required to receive up to seven hours a day for programming and recreation.

"We are far from full implementation," Wright said.

Incarcerated people housed in an RRU are offered, but not required to take, the seven hours of out-of-cell time each day.

Salazar said officers should be promoting increased education for incarcerated people, greater support for family contact and visits, improved access to health and mental health care and alternatives to violence programs instead of fighting to repeal the law.

"No level of violence within New York's prisons is acceptable, but we can and must be more proactive and creative in addressing this issue, rather than simply calling for New York to revert back to the practice of torture," she said.

Several officers at Tuesday's rally said they lack resources, proper training and working tablets for those in the special housing to contact loved ones and a lack of staff to meet HALT's requirements.

"The program sounds very good in theory," said Curtis Murphy, a DOCCS sergeant who works in the RRU at Fishkill Correctional Facility. "But when you have no staff to maintain security in the program, both for the officers and the incarcerated person and the civilians who have to actually implement this program, it can't be done.

"The resources... they don't have necessarily stuff that the directive in the law says, so it makes it very difficult every single day," he continued. "Everyone's frustrated."

Legislators need the right perspective to properly fund the mandates they've put in place, he said.

"After HALT was signed into law, the department convened a Central Office Steering Committee, established sub-committees and conducted training for all superintendents, Central Office division heads, and state-wide and local union representatives from each facility and bargaining unit," a DOCCS spokesperson said in a statement. "DOCCS was well-positioned with policies and infrastructure changes at the time the new law took effect on March 31, 2022. DOCCS has also implemented specific policies associated with the implementation and enforcement of HALT, including Central Office review and redundancies to ensure compliance.
"...Since that time, the department has seen an uptick in violence to both staff and the incarcerated population. It is our hope that the out-of-cell programming offered in the Residential Rehabilitation Units as a result of this law will have a positive effect on the population and lead to safer correctional facilities across the state."

Gov. Kathy Hochul and her staff sit in on monthly calls between DOCCS and prison reform groups. Her office referred to statements the governor made earlier this month about increased prison violence, and her willingness to have conversations about how to address the issue.

"We want to make sure they are safe as well," she said of correction officers and prison staff. "They're in harm's way every single day. I've acknowledged that, I spent a lot of time speaking with their members and their leadership, even during the pandemic, making sure that the people who are charged with these responsibilities are safe. So I'm willing to look at any data related to an increase in incidences and making sure that they're protected, as well as we do the right thing in terms of how we incarcerate people in the 2020 era. We have to make sure that we're doing things in a smart way as well."