New Yorkers will soon start to see more signs in public spaces with information about how to report human trafficking after a series of new bills were recently signed into law to help combat sex and labor trafficking.

Gov. Kathy Hochul signed a package of eight bills at the end of July to require information about human trafficking and ways to help victims be prominently featured as information cards and signs in places victims are taken the most often. Those include airports, bus terminals, hotels and truck stops. The new legislation will also increase human trafficking awareness training for employees in those industries.

The information will help give victims a discreet way to find available resources to help them, as well as employees and the public about what to look for.

"We have to alert the, mostly very young women, that they have a place that they can go that they can escape," said Assemblywoman Amy Paulin, a Democrat from Scarsdale who sponsored the legislative package in the lower house.

The laws will take effect at the end of September.

Victims, including minors, women and transgender people, are often taken to hotels and bars to solicit and buy sex.

Paulin said the laws will create new ways for frightened victims to find resources, organizations and services to help them get the treatment and services they need to start to heal for the next chapter of their lives.

"We continue to think of ways to find the victims and let them know there are services out there to get them out of this horrific situation," Paulin said.

The U.S. Department of State estimates 25 million people were trafficked across the globe in 2021, with hundreds reported in New York each year.

Here is a seven-year look at confirmed trafficking victims in the state, as compiled by the state Office of Temporary Disability & Assistance, broken down by reports rom the five-borough New York City region and the rest of the state: 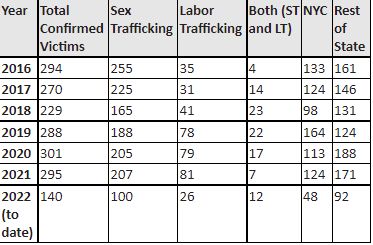 Source: The state Office of Temporary and Disability Assistance

Victims of sex and human trafficking often pass through airports, bars and other transportation hubs, and are frequently taken to hotels.

Human trafficking is a $150 billion global industry annually. New York often serves as an entry point for victims imported from other countries at airports or the Canadian border.

"There isn't actually a corner, a neighborhood, a city, anywhere in New York and across this country where human trafficking does not take place," said Sonia Ossorio, the president of National Organization for Women of New York.

"There have been cases where you will have people that could be families where the men are trafficked into construction jobs or working on farms throughout New York, and the women are trafficked into domestic servitude cleaning people's homes," she explained. "That's all in the labor trafficking arena, and it exists right here."

The new laws include requiring informational cards and signs in public restrooms of all New York airports, including John F. Kennedy, Newark Liberty and LaGuardia airports, and transportation terminals overseen by the Port Authority of New York & New Jersey.

Signs and cards must feature the national human trafficking hotline number and details on support services for victims.

An identical bill was proposed in the New Jersey Legislature in May, and waits passage by lawmakers to successfully implement the changes in transportation hubs controlled by the Port Authority.

New York is the fourth-most active state in terms of reported instances of human trafficking – behind California, Texas and Florida, according to data from the National Human Trafficking Hotline. Calls from trafficking victims and survivors have continued to rise over the last several years, but reporting declined during the COVID-19 pandemic.

The below PDF shows dispositions of sex and labor trafficking charges annually for the 10-year period from 2012 through 2021, showing a significant decline during the COVID-19 pandemic:

Human trafficking is a $150 billion global industry each year.

In 2007, New York became the first state to recognize human trafficking as a crime.