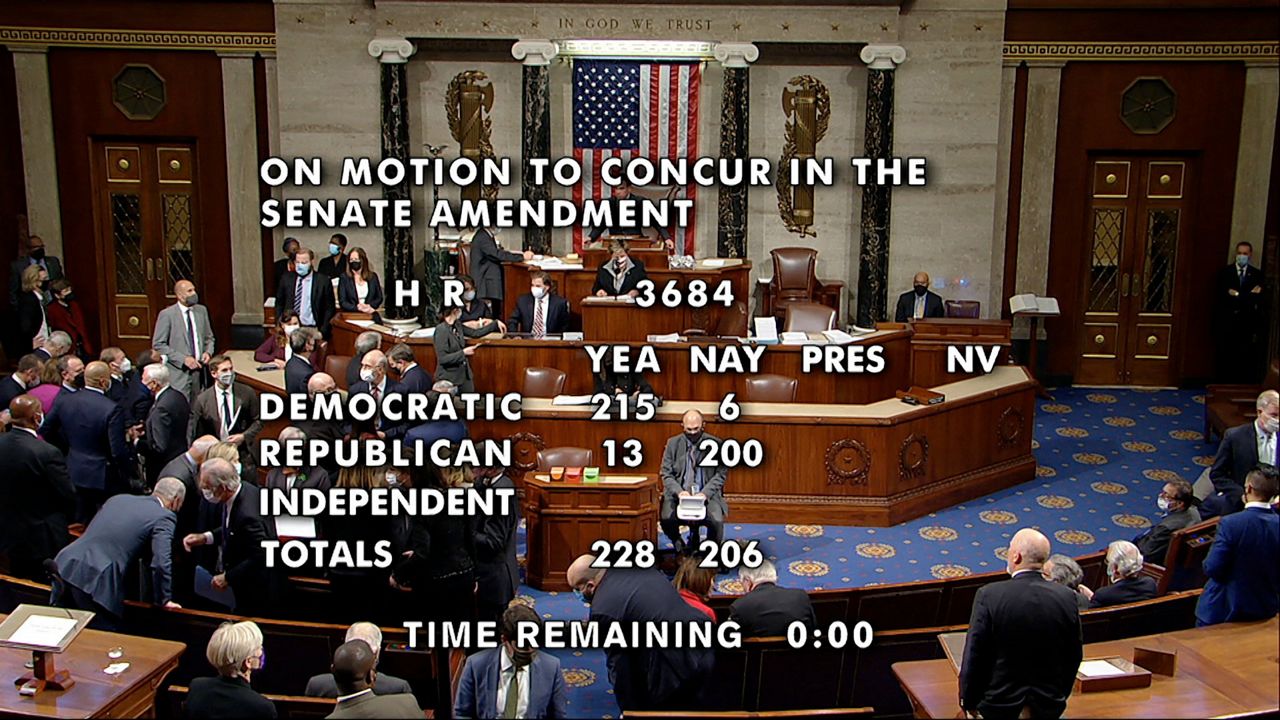 The vote total of 228-206 is displayed late Friday, Nov. 5, 2021, in Washington, as the House approves a $1 trillion package of road and other infrastructure projects after Democrats resolved a months-long standoff between progressives and moderates, notching a victory that President Joe Biden and his party had become increasingly anxious to claim.(House Television via AP)

When President Joe Biden’s $1.2 trillion infrastructure plan came up for a vote in the U.S. House of Representatives on Friday, six congressional lawmakers from New York broke ranks, voting against their party — more than from any other state.

Malliotakis called her "yes" vote on the bill a “no-brainer.”

“I don't know how anyone who represents New York City could have opposed this bill,” she said, citing what it could mean for the city and her Staten Island district.

But now she and the 12 other House Republicans from across the country who voted in support of the bill are facing fierce criticism from within the GOP. Rep. Marjorie Taylor Greene, for example, likened them to traitors and tweeted the phone numbers to their offices.

Katko, a Syracuse-area Republican, said he has received many “troubling” phone calls over his "yes" vote.

In an interview with Spectrum News 1, he pushed back on his critics, emphasizing the funding that is expected to flow to the airports, roads, and bridges back home.

Katko tells me his office has received a "substantial amount of troubling phone calls" after his #BIF vote, including "some very serious ones."

"It's the sad state of modern politics."

He declined to expand on the content of the calls or say if they've contacted authorities.

“Ronald Reagan cut deals all the time with Democrats in the House to get things done for the good of the country. That’s what we’re supposed to do,” he said. “This isn’t a zero-sum game.”

For Malliotakis, Katko, and New York’s other breakaway Republicans, their "yes" votes could pay political dividends by showing that they can be bipartisan — no small feat in a Democratic state.

Across the aisle, six Democrats from across the country voted "no," including Bowman and Ocasio-Cortez, two of New York’s most progressive lawmakers on Capitol Hill.

The lawmakers who voted "no" had long aimed to tie this hard infrastructure measure to a separate bill: President Biden’s larger social spending and climate legislation. The fate of that second bill remains in question.

Bowman said he hopes that progressives have not lost leverage to get the rest of Biden’s agenda across the finish line, now that Congress has approved the hard infrastructure plan.

Bowman said he does support both bills. He just wanted them passed together.

“It can't just be about roads, tunnels, and bridges and not about child care, health care, seniors, immigration and all the other issues that impact my district and districts across the country,” he said.

President Gary LaBarbera said he is “very disappointed” by the Democrats who voted "no" and noted the organization “will be reviewing how we move forward with those individuals.”

LaBarbera said the legislation has the potential to create tens of thousands of jobs in the state.