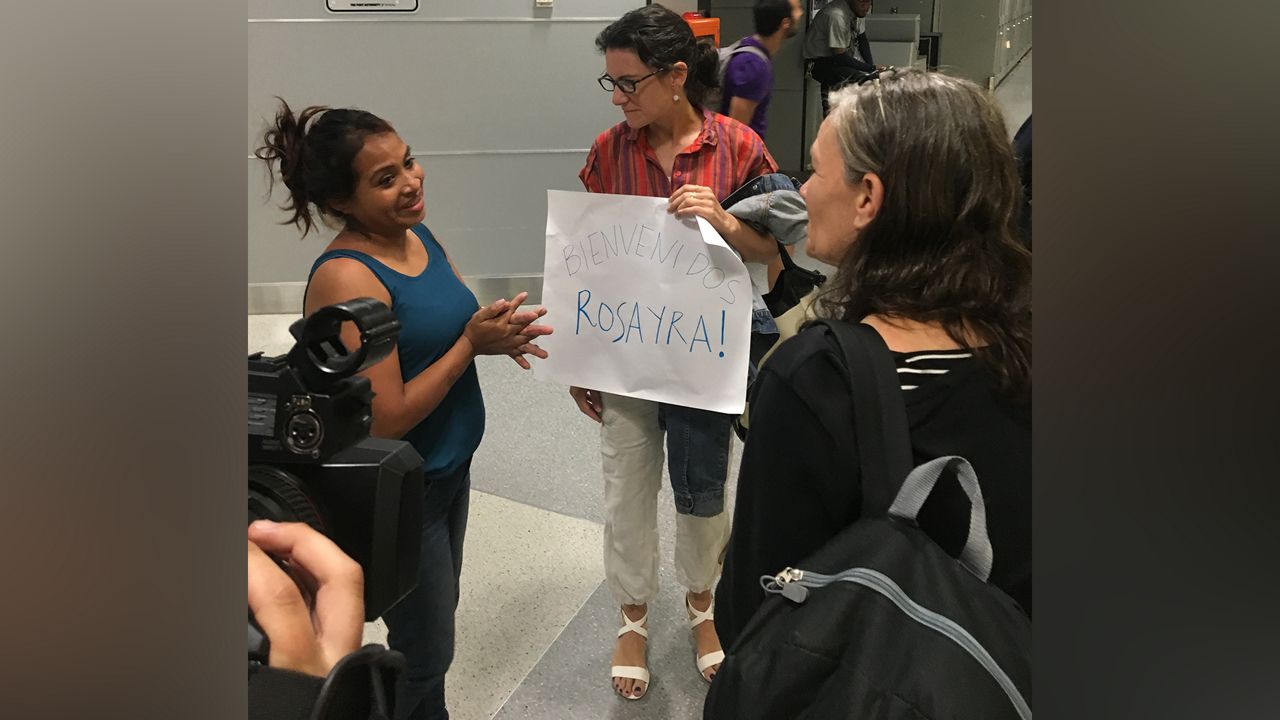 Rosayra Pablo-Cruz, left, is an undocumented immigrant who was reunited with her children thanks in part to the help of Immigrant Families Together. Some of their members, seen on the right, greeted Pablo-Cruz in New York City after she traveled from Arizona.

Julie Schwietert Collazo is adamant about posting bond for some immigrant mothers separated from their children after crossing the United States border.

To complete that goal for some mothers, she drove earlier this month to get to Federal Plaza in lower Manhattan to a local office for U.S. Immigration and Customs Enforcement, known as ICE.

Freeing the immigrant women requires giving the agency more than $22,000.

Two of them are in Eloy, Arizona, where Rosayra Pablo-Cruz — who traveled to New York City to reunite with two of her sons after they were separated for more several months — was held before Schwietert Collazo posted her $12,000 bond last week.

Rosayra Pablo-Cruz was overjoyed last week to see activists from Immigrant Families Together. The group helped bail her out of an immigration detention center in Arizona. Days later, Pablo-Cruz was reunited with her kids in #NYC. https://t.co/QZ8qu3W6H0 #MorningsOn1 @joshrobin pic.twitter.com/hyunplnPIr

Schwietert Collazo, a mother of three herself, is part of the group Immigrant Families Together. It has crowdsourced thousands of donors, more than $200,000 in contributions, and a cross-country volunteer network that powers reunions. It's a clearinghouse of sorts, also offering necessities of life after, when the families dangle in legal uncertainty.

Nine women run it, juggling jobs and kids. They say they see kinship in freeing other moms they've never met, whose language some can't speak.

"When you mess with a mom and her child, you will meet mama bear," said Kate Lindenberg of Immigrant Families Together. "You put yourselves in their shoes and you can't stop."

Back in Schwietert Collazo's car, her kids were cheerful. Eight-year old Mariel was even texting group members when her mom's hands are on the wheel.

But a deadline was looming to make the bond in time to free the two women who were still in Eloy.

By 2:43 p.m., rain was pouring in New York City. Schwietert Collazo had to get bonds in to Federal Plaza by 3 p.m.

Ten minutes before the deadline, she double-parked her car, taking liberties with a police press pass on the dashboard that was from her time as a freelance reporter.

Another group leader, the only without kids, watched Schwietert Collazo's. College student Zoe Van Tieghem said the pressure for only two women will intensify. The federal government is required to release all the kids by July 26.

"All of these people are just going to be released with no assistance — which is terrifying — and have no way to get to their children," Tieghem said.

An hour-and-a-half later, Schwietert Collazo returned with a smile: She paid the bond.

While others may have seen a chaotic, overly stressful few hours, she saw no alternative.

"I wouldn't want to be a mom sitting in detention apart from my kids. Because I can. So if I can, I feel like I have to," Schwietert Collazo said.

A few hours later, she emailed pictures of two more mothers, released from Eloy, taking the same path as Pablo-Cruz.

Join us tomorrow as we finish our four-part series, "A Mother's Journey," by looking at what Pablo-Cruz and her children are doing now, and the plans for the thousands of other children, many in New York, who have not been reunified with their parents yet. Watch "Inside City Hall" at 7 p.m. and 11 p.m. to learn more.