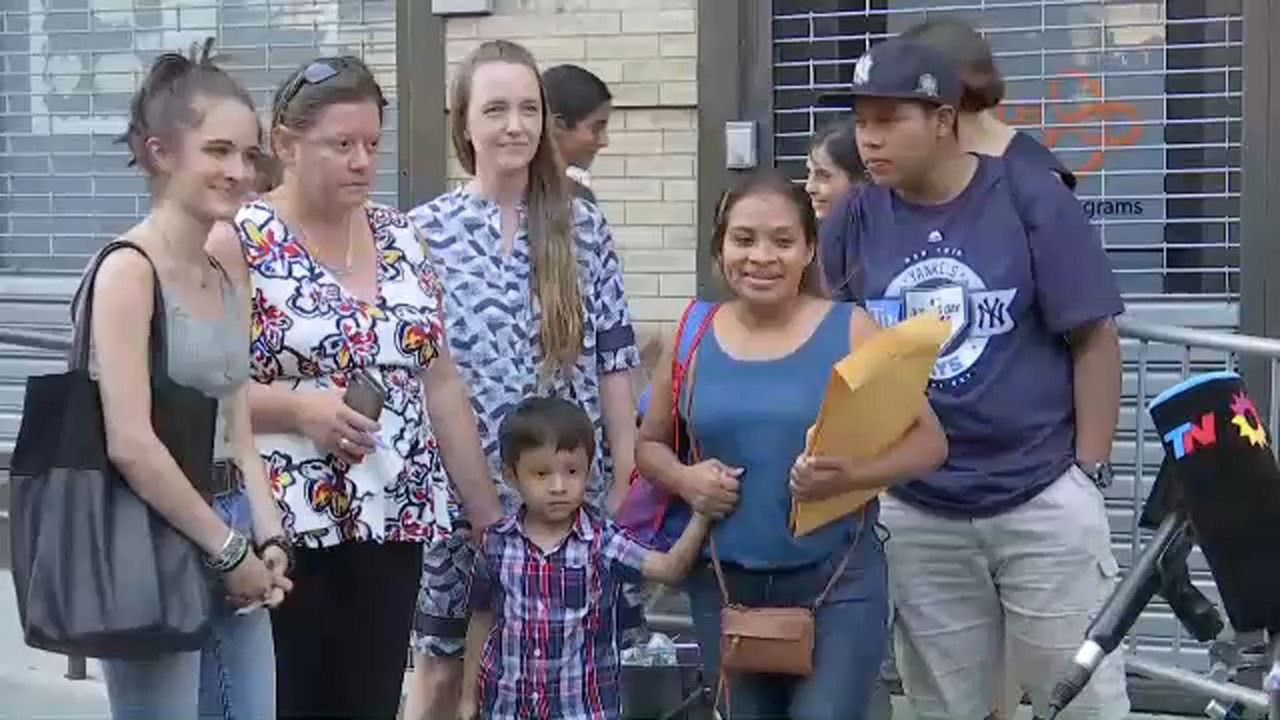 A few months earlier, she crossed the southern border of the United States with her two sons, 15-year-old Yordi Alberto and 5-year-old Fernando Jose. Violence and gang threats prompted her to flee, concerned what would happen to her boys.

A week later, she crossed to San Luis, Arizona, where authorities captured them. They put them in a detention center nicknamed the "Icebox" for how cold the temperature is. Not long after, both her boys were taken away from her and the "Icebox" and eventually transported to New York City. Pablo-Cruz, meanwhile, was taken to a different facility in Eloy.

A Bronx-based lawyer got her out with a $12,000 bond that was crowd-sourced by a New York City group.

One day later, she said goodbye to two other mothers who were bailed out from the same detention center south of Phoenix, Arizona.

Pablo-Cruz had to then — just one day after she was bailed out — go back to the place where she spent nearly three months without her children: the detention center in Eloy.

She had no identification when she was released from the facility. Authorities had her passport. Her lawyer, Jose Xavier Orochena, claimed officials kept it to quickly deport her in case they received the order.

So they went back to try to change the officials' minds.

Amidst all of the uncertainty, Rosayra was sure about one thing: she needed to make a one important call on the way. It was her 15-year-old son, who was back in New York.

The question was: When they will see each other?

The answer came sooner than anyone predicted, as she got her passport back from the detention center.

That night, she could make her way back to her children. Orochena drove her to an airport in Phoenix and joined her on the red-eye flight to go 2,500 miles northeast to New York City.

"Happy because I'm going to reunite with my kids. Very happy," she said, describing how it felt to finally be getting closer her sons.

She was greeted in the morning by the same group that posted the bond, freeing her. They hugged tightly in the airport.

They then drove to the Cayuga Center, the East Harlem foster care agency that is placing dozens of separated children in short-term foster care.

It will be the first time Pablo-Cruz sees her two sons in 81 days. The mother came prepared with a stuffed dinosaur. 5-year-old Fernando Jose left it when authorities separated him from his mom at an Arizona facility. She said it was 2 a.m. on April 22.

No cameras were allowed when they saw each other for the first time, but they emerged to a crush of reporters who were there to cover another immigrant mother who regained custody after a similar separation.

Grateful to the city where she is trying to stay, Pablo-Cruz turned her attention to those left behind. More than 2,000 children remain apart from their parents after federal agents separated them.

It's not seen as likely that authorities will meet a court-imposed July 26 deadline to reunite all of them.

"I call on mothers not to lose hope; to keep faith," Pablo-Cruz said in Spanish. "Because there are good people. There are people with great, big hearts."

The family was then bound for an apartment that the group arranged. Pablo-Cruz said she hoped they would stay in New York.

"I love New York, after all that is going on!" she said. "I love the people of New York."

Her 15-year-old son, Yordi Alberto, agreed. "I feel that my friends are here and all of those people who I met. And my foster mother who had been taking care of us and treated us very kindly. She supported us. And I will never forget her."

Some children separated from parents at border sent to the Bronx

We ask the teenager about his bracelet — the American flag was on his wrist.

"I know that in this country, we can prosper. We can reach our goals," he said. "This country, I feel, can protect us."

Join us tomorrow to learn more about the network of people who help mothers like Pablo-Cruz — especially a group started by a Queens woman — in our four-part series, "A Mother's Journey." Watch "Inside City Hall" at 7 p.m. and 11 p.m. to see Rosayra Pablo-Cruz's experiences first-hand.