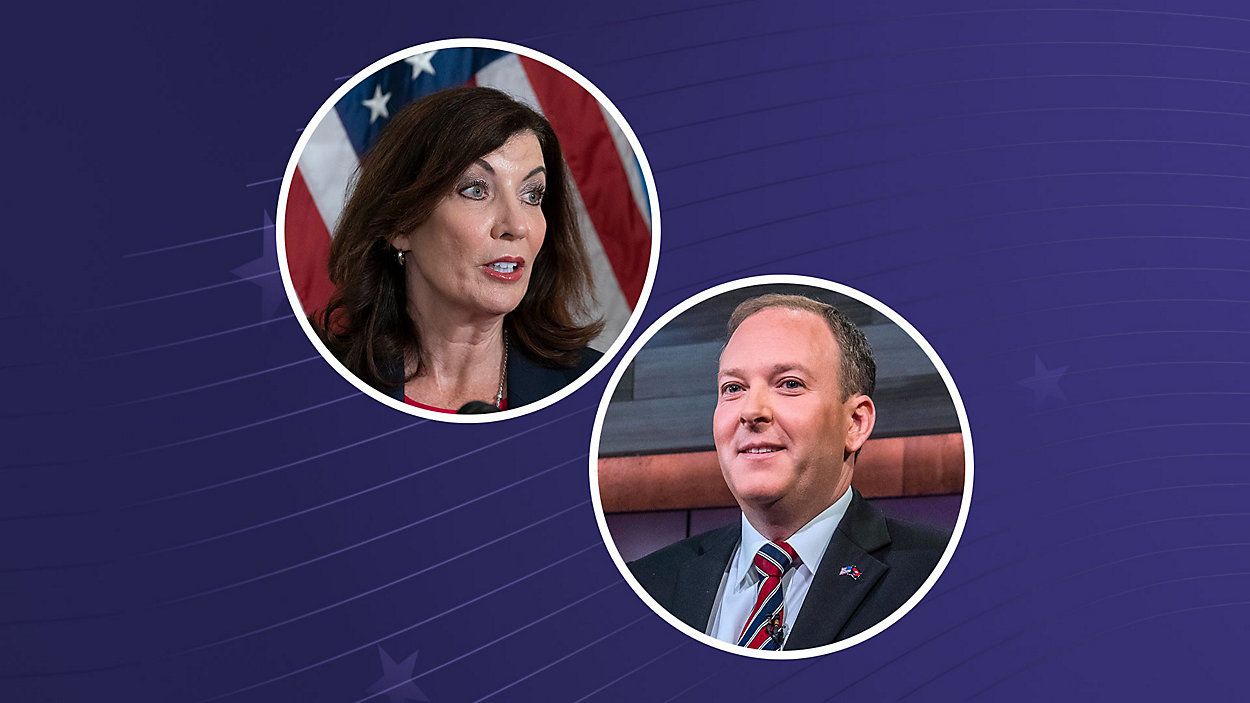 The race for governor in New York is becoming an increasingly heated contest, with both campaigns trading punches over ethics, corruption and malfeasance.

Allies of Gov. Kathy Hochul have seized on Republican-backed efforts to secure Rep. Lee Zeldin an additional ballot, but failed to do so after petitions contained multiple duplicate signatures. Republicans, meanwhile, have pointed to a Hochul campaign donor receiving a lucrative state contract to provide COVID-19-related supplies.

Reporting on these stories, first made by The Times Union in Albany, has fueled both campaigns to call the other corrupt and led to calls for investigations.

"We've studied both of these scandals or ethics issues very closely and they both look bad, they both look real," said John Kaehny, the executive director of Reinvent Albany, a government watchdog.

But whether voters — racked by two years of societal upheaval — are paying attention to these specifics stories, or simply chalking this up to how things are just done in Albany, is not yet clear. Hardened polarization over issues like guns, crime and abortion has likely welded many voters to either candidate, Kaehny said.

"Corruption, at least in a general election between Democrats and Republicans, has reached a place where it's not decisive because there are so many core ideological issues," Kaehny said. "Corruption creates mistrust, cynicism, voter apathy and general lack of engagement."

Still, neither campaign is surrendering on the ethics issues. Hochul's campaign on Tuesday made Sarah Steiner, an election lawyer, available for an interview. She criticized the efforts by Republicans to revive the Independence Party ballot line this November through the petitioning process.

Candidates in New York are allowed to run on multiple ballot lines, and having an additional appearance in the general election would be an advantage.

"Zeldin is a member of Congress and he has gone all out opposing the election of President Biden, talking about fraud and he is now involved in his own absolute uncontroverted fraud situation," Steiner said. "I think as someone who has been an election lawyer and a criminal lawyer for the last 35 years or so, Zeldin is acting hypocritically at best here."

Republicans and Zeldin's campaign have denied any wrondgoing. But the petition controversy hasn't stopped Zeldin's campaign or his Republican backers from calling for investigations over Hochul's campaign receiving donations from a vendor who was awarded a $637 million state contract to provide COVID-19 rapid tests.

The Times Union reported on Tuesday the donor and vendor threw an in-person fundraiser for Hochul, who has maintained there has been a strict separation between the campaign and government sides. She has also defended the contract as New York needed a large number of COVID-19 tests amid last year's COVID-19 case surge.

Still, Republicans in the state Senate called for an investigation over the matter.

"Sadly, another day, another report on Albany’s pervasive pay-to-play culture," said Senate Minority Leader Robert Ortt. "Gov. Hochul’s massively bloated, taxpayer-funded deal with state contractors who just happen to be some of her biggest campaign donors simply does not pass the smell test."

New York's state government, of course, is familiar with the biways of graft and fraud. A parade of elected officials from both sides of the aisle have left office either in handcuffs or have resigned in disgrace. Promises to cleanup state government are made, but venality seems to find a way to thrive regardless.

"I think the voters have become so discouraged by the years if not decades to fix Albany or Washington for that matter and they haven't seen any of the fixes really happening," said Blair Horner of the New York Public Interest Research Group.

Over the years, successive governors and lawmakers have sought to tighten ethics and anti-corruption laws and create new watchdog entities.

"There are plenty of watchdogs, whether there are violations, of course, is the big question," Horner said. "Certainly it should be crystal clear that it's illegal to fake signatures on petitions and to use government contracts as a way to raise campaign contributions. Certainly those laws need to be strengthened."