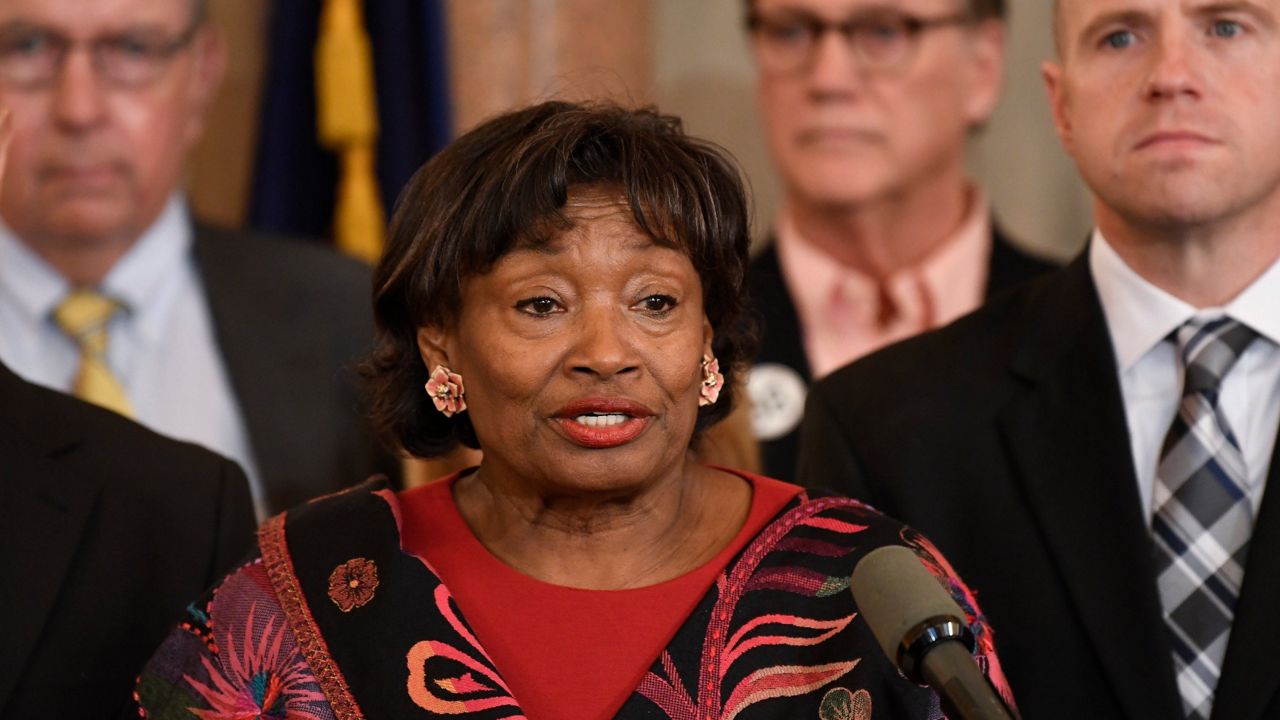 In this Jan. 14, 2020 file photo, New York Senate Majority Leader Andrea Stewart Cousins addresses the media at the state Capitol in Albany. On Wednesday, Feb. 27, 2020, Stewart-Cousins defended a proposal by senate Democrats that would eliminate cash bail entirely for misdemeanor and nonviolent felony cases but give judges more discretion over who is released from jail before trial.

Senate Majority Leader: “There Will Be An Accounting”

Senate Majority Leader Andrea Stewart-Cousins (D-Yonkers) told Spectrum News that when the time is right, “there will be an accounting” by the legislature regarding the Cuomo administration’s spending during the pandemic. She also promised to hold hearings on how the pandemic gained a foothold in the state’s nursing homes.

Today’s Buffalo News is reporting that the Cuomo administration has not been forthcoming about how money to fight the pandemic is being spent. The same article quotes Susan Lerner, Executive Director of Common Cause, saying the legislature “is not doing their jobs.”

Stewart-Cousins says she is aware of the criticism.

“I know that there are a lot of conversations about how things happen and whether or not there has been too much power given to the governor,” she said via Skype today.  “We have never abrogated [our] responsibility.”

On March 2, lawmakers approved $40 million in emergency pandemic funding; at the same time, they expanded the governor’s powers to handle this and other emergencies.

“We gave $40 million. We know that amount of money has gone into trying to get PPE and ventilators … it’s something that we all need an accounting for and we will ask for that,” said the majority leader. “But in the middle of what I know is a horrific time for all of us, we are extremely supportive of trying to do the things that will help us to survive.”

In other words, there will be an accounting, but only when the time is right. That time is not now.

“For now, our responsibility is to be a government that works together for the people,” said Stewart-Cousins.

Last week, the Senate and Assembly announced joint hearings into how small businesses and the minority community area are being affected by COVID-19.

When asked about possible hearings into deaths at nursing homes across the state, Senator Stewart-Cousins stated, “There will be a time, I am sure, that we will start holding hearings on nursing homes.”

A Cuomo administration executive order from March mandated COVID positive patients coming from hospitals to be accepted by nursing homes. While the executive order has since been rescinded, some newspapers have connected the EO to the growing crisis.

It’s not exclusively nursing home residents who are dying of COVID. Nursing home staffers are dying as well, along with EMTs, nurses, doctors and police. The scope of the tragedy has raised questions about whether first responders should receive “line of duty” benefits. Stewart-Cousins believes they should.

"We have to look at how we can compensate people for being essential in ways that we never understood essential would ever mean and thank them in financial ways,” she said.

While the Cuomo administration has received largely positive reviews for its handling of the pandemic, it has not had much success increasing the capacity of its unemployment insurance system. It’s something Stewart-Cousins says lawmakers are hearing about every single day.

“All of us are inundated,” she said. “Let me assure you and everyone else that every single legislator is doing what they can to ensure people access these funds. That being said, it is still a system that is being totally overwhelmed.”

In order to pay for things like unemployment, line-of-duty death benefits, and other more traditional expenses like health care and education, Stewart-Cousins said she is considering a tax hike, as well as almost anything else that could help strengthen the state’s fragile bottom line. But she warns against thinking that a tax hike would solve the state’s problems.

“Nothing that we look at can get us out of the hole we are in. We are not self-sustaining. There is not enough revenue that we could raise in this state that could get us back to where we were,” she said. “I can only emphasize it a thousand times, we need the help of our federal partners, but we need to look at everything."