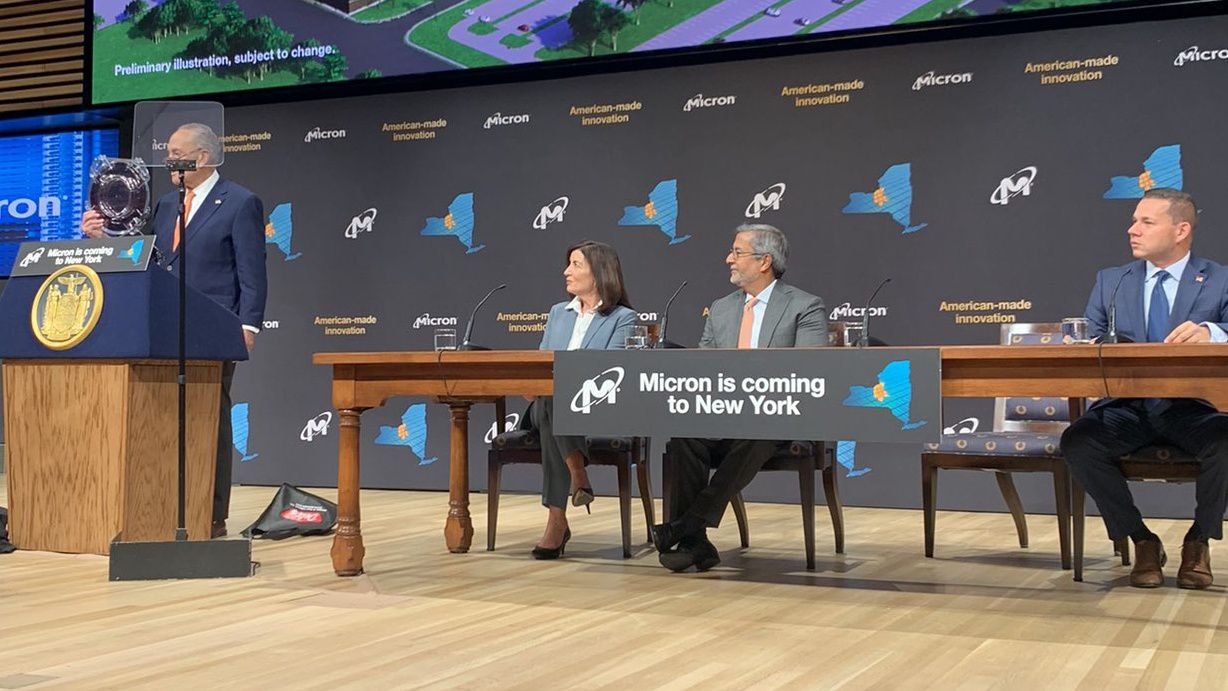 Micron is set to open a large chip manufacturing campus in the town of Clay, a suburb of Syracuse. (Jack Arpey/Spectrum News 1)

The computer memory chip specialist Micron will build a chip manufacturing facility in the White Pine Commerce Park in the town of Clay, potentially bringing tens of thousands of jobs to the region, U.S. Sen. Chuck Schumer said Tuesday during a news conference.

President Joe Biden released a statement on the announcement Tuesday morning saying, "To those who doubted that America could dominate the industries of the future, I say this – you should never bet against the American people. Today is another win for America, and another massive new investment in America spurred by my economic plan. Micron, an American company, is investing $20 billion dollars this decade and up to $100 billion over twenty years in CHIPS manufacturing in upstate New York, creating tens of thousands of good paying jobs. Together, we are building an economy from the bottom up and the middle out, where we lower costs for our families and make it right here in America."

Micron CEO Sanjay Mehrotra credited Biden, as well as the CHIPS and Science Act authored by Schumer for setting the foundation for the plant.

Touting a bill he long fought for, @SenSchumer argues that "without the CHIPS and Science Bill," a leader in France, China or another country would be announcing a new microchip plant today rather than NY

"The combined efforts at the federal, state, and local level paved the way for Micron to realize the largest private investment ever made in New York state history. We are thrilled to make this significant investment in New York, making the Empire State the location of the biggest leading-edge memory site in the U.S.," said Mehortra.

The company plans to build four 600,000-square-foot “clean rooms,” on that site, which will be roughly 40 football fields in size, making it one of the largest construction projects in North America with construction spending of $31 billion and 5,600 related construction jobs, according to New York Gov. Kathy Hochul's office.

"I promised that we would jumpstart the economy by being the most business-friendly and worker-friendly state in the nation, and thanks to our State Green CHIPS legislation, the federal CHIPS and Science Act, and extraordinary partnerships with business, labor, and local and federal leaders, this project will do exactly that. Together, we are leveraging this investment to secure our economic future, solidify New York's standing as a global manufacturing hub, and usher the state into another Industrial Revolution," said Hochul.

Micron will invest $100 billion over 20 years, which according to Schumer, is the largest private investment in New York state history, and is set to provide 50,000 jobs throughout the area, with 9,000 working directly for the company. The average starting salary for a Micron employee is $109,000.

"After years and years of hard work, it's official. Micron is coming to Central New York. If there's a word to describe to today it's tranformational; for upstate New York, for America. It will be the most advanced chip manufacturer in America and probably the world, all here in Central New York," Schumer said in a statement. "We invented the chip in America and once again we are going to make them here in America. We will bring these jobs back from foreign shores and end our dependence on foreign chips."

According to a press release from Hochul's office, the plant is expected to generate an additional $16.7 billion in inflation-adjusted economic output on average per year. It is also anticipated to add an additional $826.1 million in revenue to local governments.

@SenSchumer calls this announcement of @MicronTech coming to Clay, New York @OnondagaCounty is liken to the @ErieCanal @SPECNews1CNY calling it the 21st Century Erie. “A transformative day.” pic.twitter.com/BPe6eXd98d

"This is our generation's Erie Canal moment, and my administration is committed to meeting this pivotal and exciting moment in time," Onondaga County Executive Ryan McMahon said in a statement. "We will make sure that every neighborhood in every corner of the County feels part of this historic and transformational project. As important, this is a project that many people felt we weren't worthy of, but at the end of the day the greatest memory technology company in the world chose Onondaga County."

Micron employs 48,000 people in 17 countries and says it is the fourth largest semiconductor company in the world.

"We chose this location for many reasons, but most importantly — Central New York offers a rich pool of diverse talent, including communities that traditionally have been underrepresented in technology jobs," said Mehrotra.