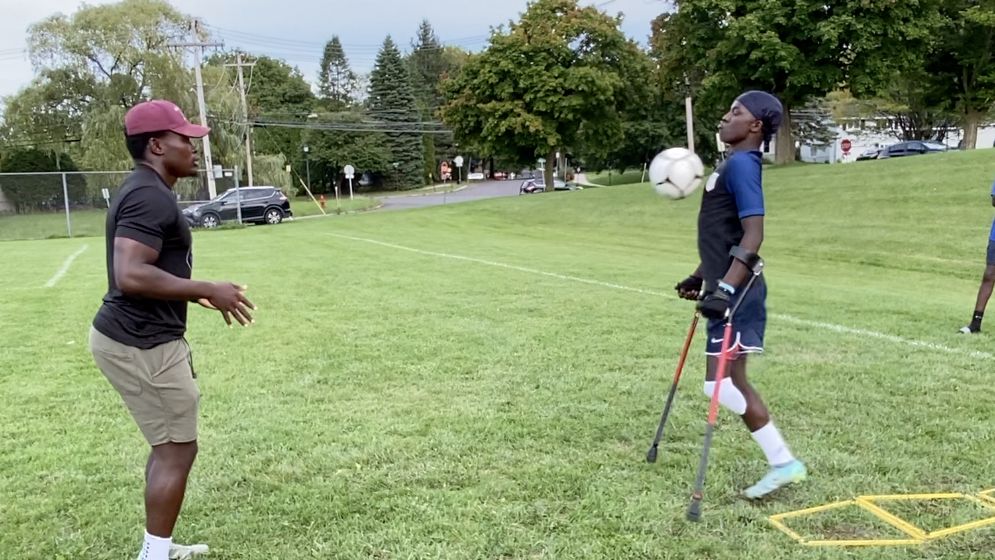 It was Nottingham coach Claude Tuyishimire who said it best.

“Football is beautiful and it’s fun," he said to his team in August. "But we have to do the right things to keep it that way.”

It's a message Fowler graduate Musa Nzirimwo embodies every time they train together. Soccer on two legs is hard enough. He does it with just his right.

For Nzirimwo, soccer is life.

“It means a lot to me," Nzirimwo said. "I grew up playing the sport. When I lost my leg, I kind of gave up, but I realized, never give up. Keep going.”

Growing up in the Democratic Republic of Congo, Nzirimwo fell in love with the game. Limited access to proper equipment didn't phase him. But at age 7, his soccer career and his life changed forever.

“I was out in the field, playing soccer," he explained. "You know how grenades are shaped like a ball? We thought it was a little ball, so we started playing around with it. We didn’t know t was a grenade or anything. We kept on playing, and it blew up in front of me.”

The result was devastating. Nzirimwo lost his left leg from his knee down. After waking up in the hospital and hearing the news, Nzirimwo realized the extent.

It wasn’t for a few more years until Nzirimwo ended up in Kenya, where he was fitted with his first prosthetic leg. Then at age 12, he relocated to the Syracuse area through a refugee program.

Suiting up for the Fowler soccer team is where his love of soccer shined.

“I started playing soccer with my prosthetic, and that's when I scored 12 goals in one tournament,” Nzirimwo said.

Through YouTube videos, he started gaining attention from a team he didn’t even know existed: the U.S. National Amputee Soccer Team, a unit that plays without prosthetics, only with the help of crutches.

Finding a way to represent the United States and fight through the odds was a dream.

“It’s crazy," Nzirimwo said. "Like, me personally, I didn’t know I was going to be playing for my country right now. I just played for fun. Even though other kids were talking about being professionals. So when I think about it, I wanted a leg that was normal. Being a pro, doing this for fun, that’s when everything came.”

From his soccer career nearly ending in a tragic accident, to playing on the world stage in Turkey next month, Nzirimwo’s journey has come full circle.

“It meant a lot for me," he said. "Just for people to support me. I never knew I was going to get this much support playing for them. For my teachers that helped me go through this, Dale, Zarina, Vince, Claude, they all did, I’m thankful for them. Without them, I wouldn’t be here now."

When the lights come on and the team take the field, there will be just one goal in mind.