Cornell researchers are pushing back against a proposed ban on certain insecticides in New York, saying lawmakers should consider only banning their use for specific crops that flower prior to harvest.

The neonicotinoids are used across the state by farmers on their crops and by lawn care businesses, but New York lawmakers are looking to ban their use, citing a negative effect on pollinators such as honeybees.

Neonicotinoids are banned in Europe, parts of Canada, and a few states in the U.S. such as Maine and New Jersey. In New York, the Birds and Bees Protection Act, passed the state Assembly, but never reached a vote in the state Senate. The bill’s sponsor, Sen. Brad Hoylman, D- Manhattan, said the bill will be reintroduced next session.

"The Birds and the Bees Protection Act is a transformative piece of legislation that provides targeted, science-based restrictions on neonicotinoid pesticides that are having a devastating impact on pollinators,” Hoylman said in a statement to Spectrum News 1. "We review all bills before reintroduction and seek input from stakeholders throughout the year, but at this time we do not have any specific changes planned for the Birds and the Bees Protection Act."

Earlier this year the New York State Department of Environmental Conservation announced they will restrict the use of neonicotinoids pesticides beginning January 1, 2023.

"Protecting pollinators is a top priority which is why New York took action to restrict the use of neonicotinoid pesticides to help safeguard pollinators crucial to New York's environment, agricultural economy, and biodiversity,” said Jomo Miller, a spokesperson for the New York State Department of Environmental Conservation. “Reclassifying neonicotinoid pesticides protects public health and the environment by limiting the sale to certified applicators for use in only targeted instances.”

But researchers at Cornell Agritech say a more targeted approach is needed. 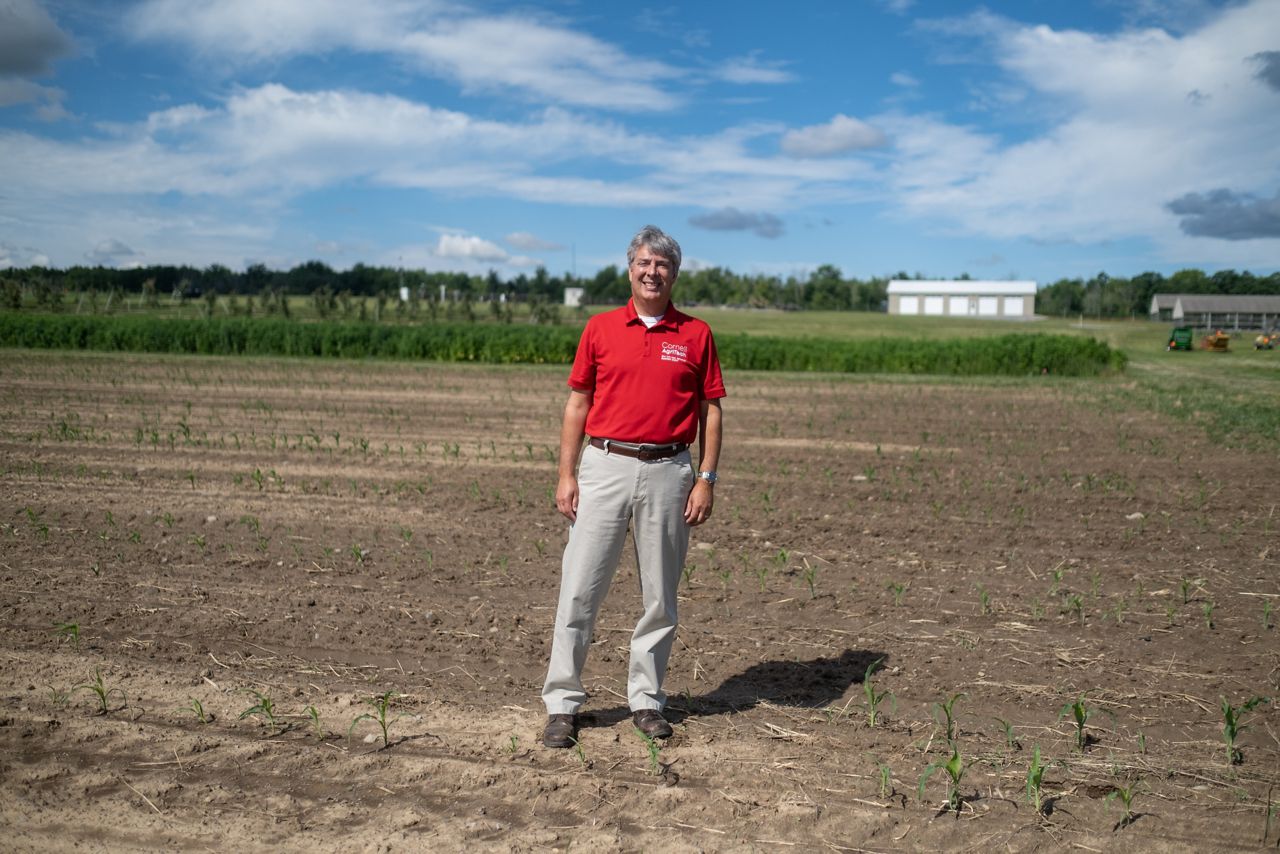 Brian Nault poses for a portrait at the research farm at Cornell Agritech. (Emily Kenny/Spectrum News 1)

Brian Nault, a professor and the program leader for entomology at Cornell Agritech, studies alternatives to using neonicotinoids, focusing on vegetable crops such as corn, potatoes, snap beans, onions and squash.

“In my opinion, the risk of neonicotinoids to pollinators really is dependent on the crop and how that insecticide is applied,” said Nault. “So for example, if a neonicotinoid insecticide is used as a seed treatment on a crop like onion, or leafy greens, that are harvested before the crop flowers, there's going to be a negligible, if any, effect on pollinators, especially bees, because they have no reason to go into those fields. In contrast, a crop like squash, which is heavily dependent on bees in that bees must pollinate that crop, and they're going to be in the fields quite frequently, using a neonicotinoid spray, for example, is going to pose much greater risk.” 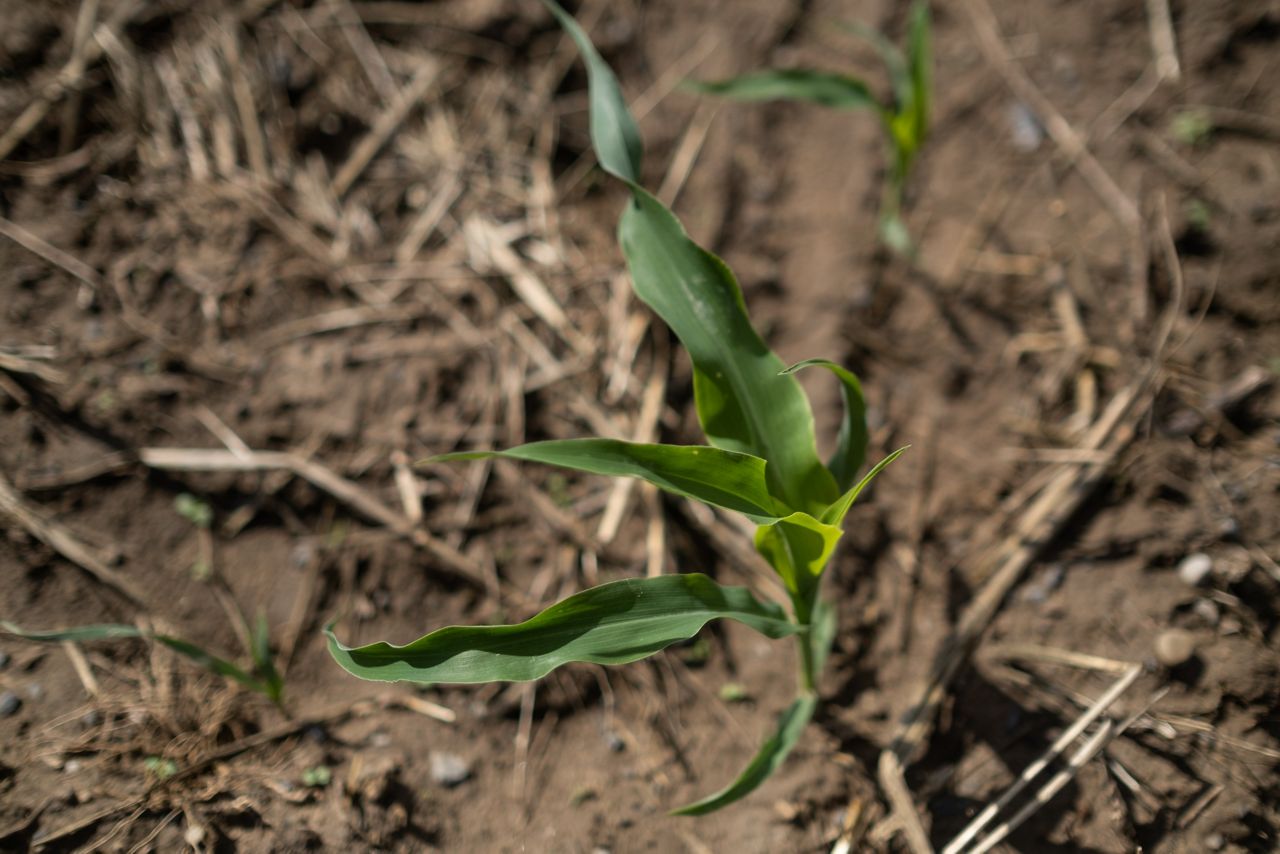 Sweet corn that Brian Nault is using as part of his research to find an alternative to neonicotinoids pesticides. (Emily Kenny/Spectrum News 1)

Nault said neonicotinoids are applied as a treatment to the seed prior to being planted in the ground.

“If you're planting a seed that has the insecticide or fungicide, you're not spraying something so you're minimizing the impact on non-target organisms, including bees and other things,” said Nault. “So it is an overall safer way to deliver the insecticide.”

Nault’s colleagues at Cornell Agritech and New York State Integrated Pest Management, Kyle Wickings and Alejandro Calixto, are studying the use of neonicotinoids on turfgrass and fruit trees. 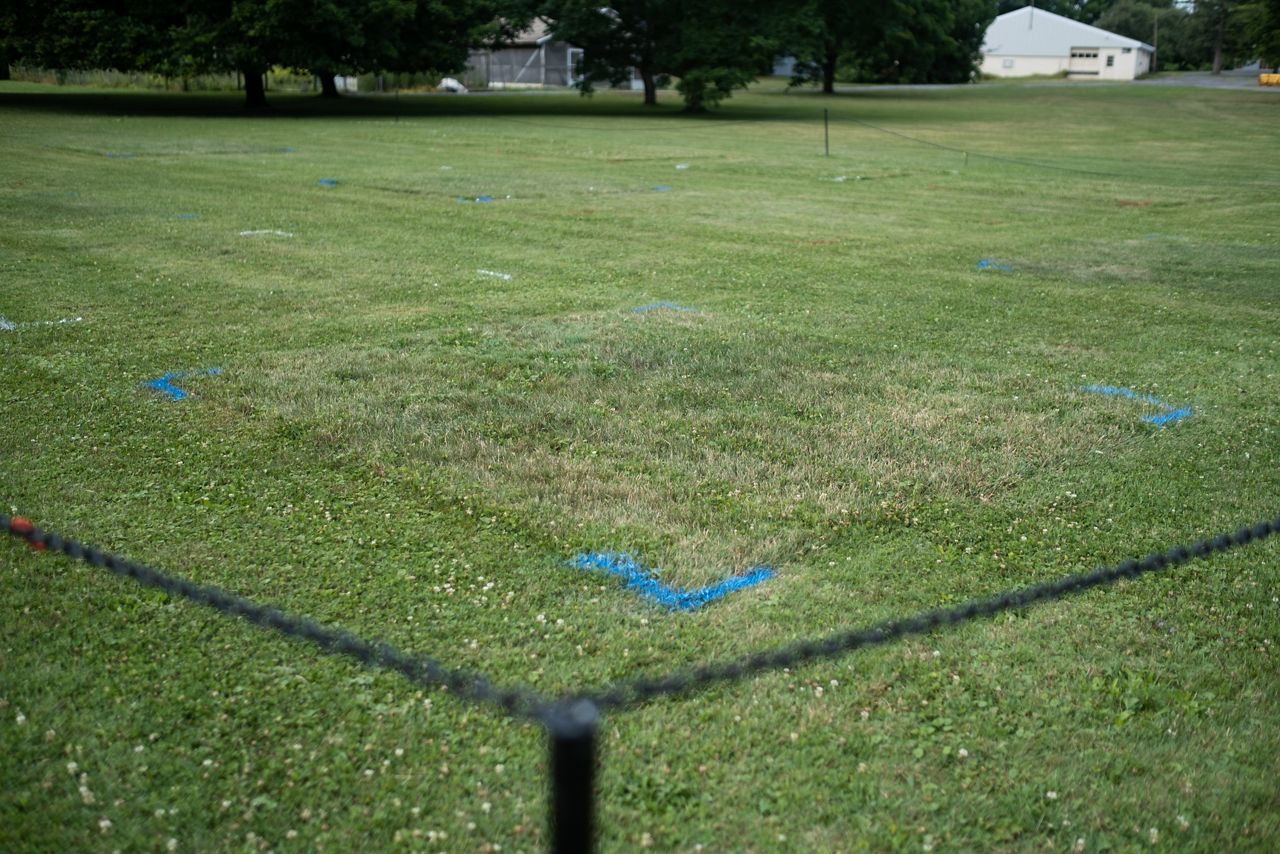 Wickings said neonicotinoids are used on lawns to prevent Japanese beetles from invading.

“Right now, people would use it as a preventative insecticide, and so typically, they use it by applying the material around the time that they see [adult beetles],” said Wickings.

In Nault’s research, he has found that a single treatment with neonicotinoid insecticide can be a treatment for multiple pests. He hasn’t found an alternative that doesn’t require multiple applications. 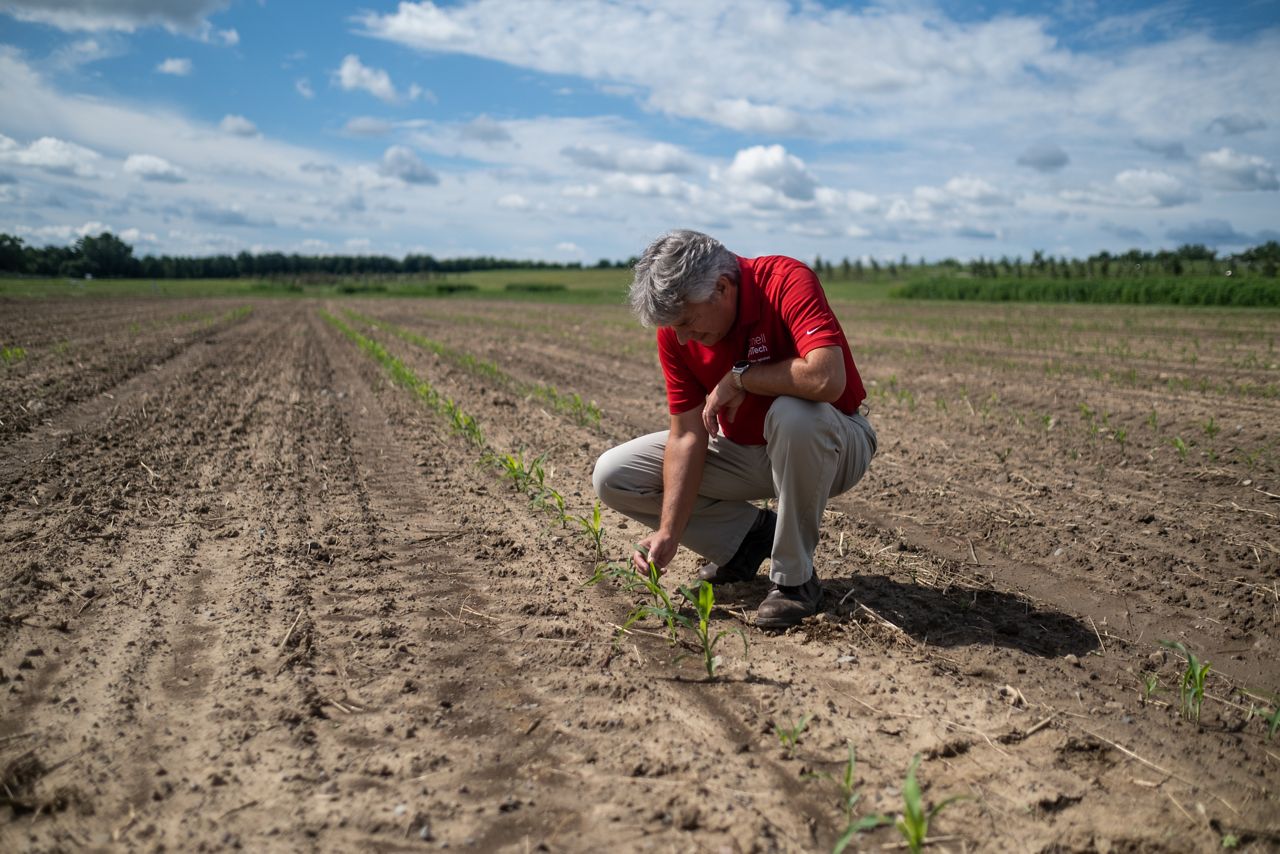 Brian Nault looks at the sweet corn being used in his research at Cornell Agritech. (Emily Kenny/Spectrum News 1)

Nault said while it is true that neonicotinoids can harm bees, the consequences of the outright ban could make it complicated for vegetable growers.

“Growers have limited tools, and the release or availability of insecticides that affect pests and not bees is very, very minimal,” said Nault. “By virtue of the name, insecticides kill insects and bees are insects so trying to find something that is selective of pests and not bees is a tall order, but nonetheless we need to strive to do that because pollinators are critical to our environment and agriculture.” 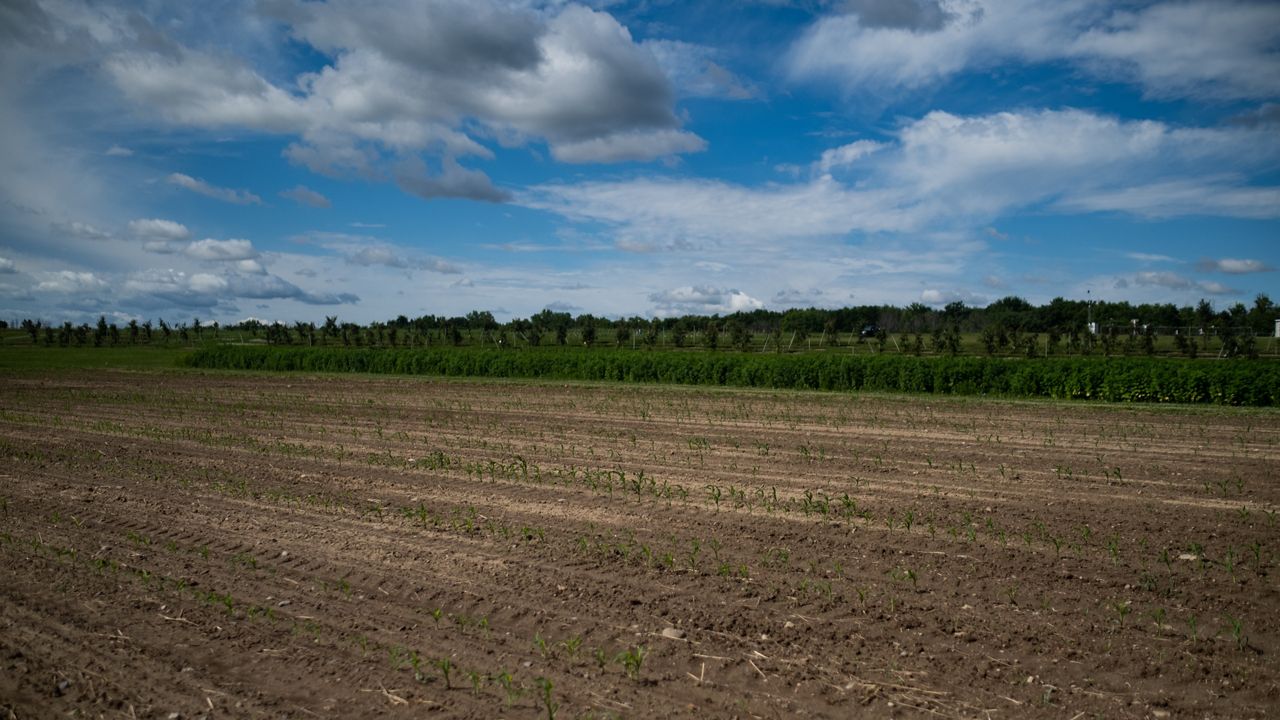