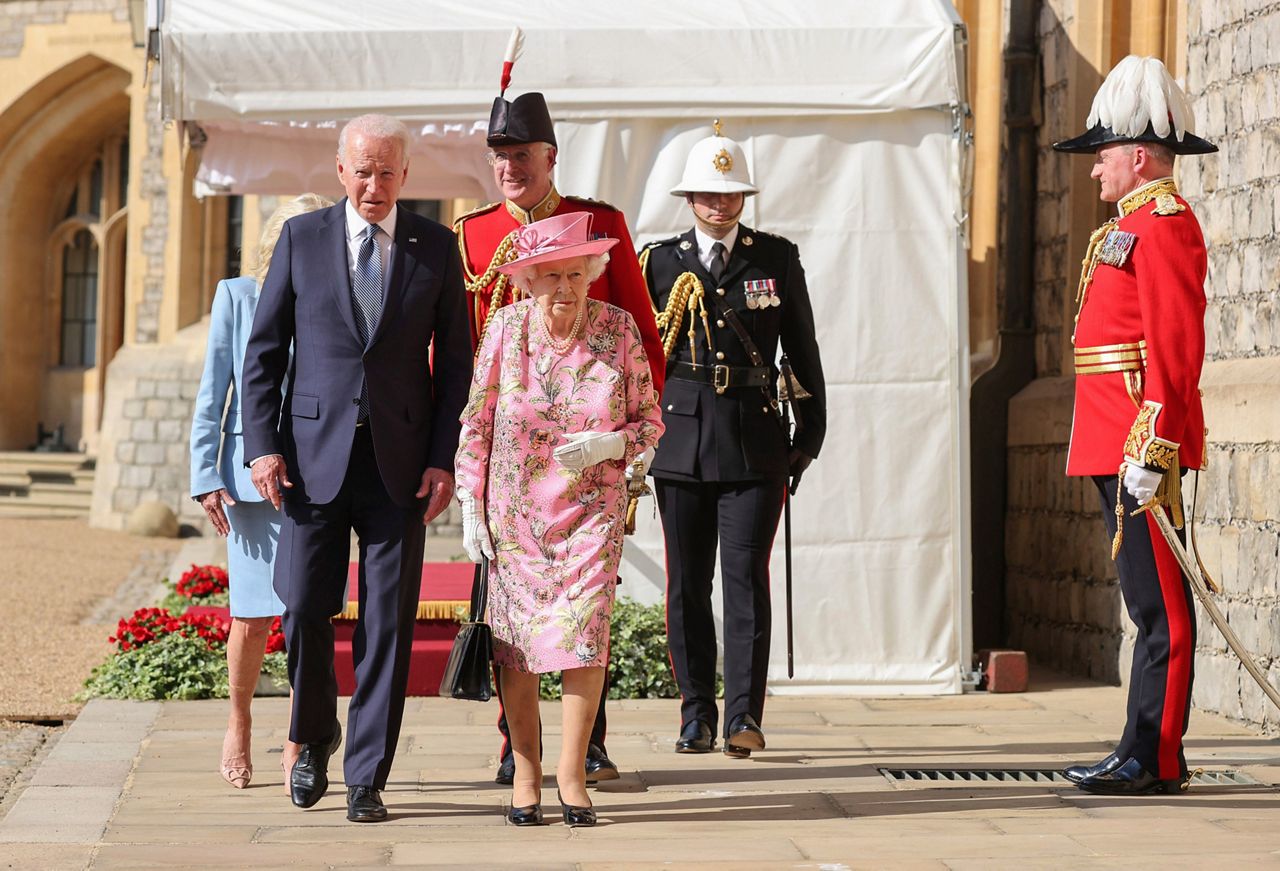 President Biden and First Lady Dr. Jill Biden emerged from a Land Rover on Sunday to meet the awaiting queen, who stood on a dais dressed in a pink hat and floral dress. The president wore his aviator sunmark glasses as he joined the monarch, only to remove them as he inspected the red-uniformed and bearskin-capped Guard of Honor assembled on the castle grounds. 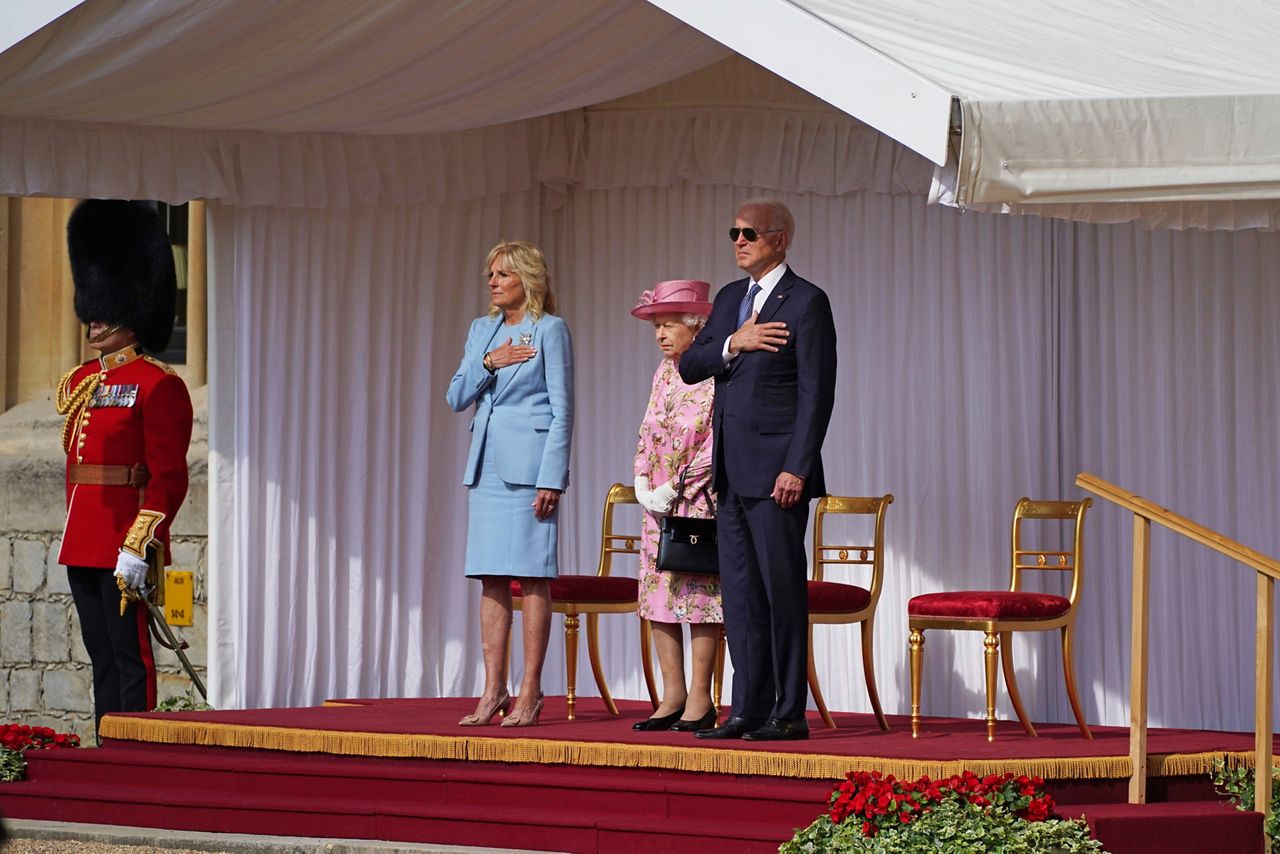 The queen and Dr. Biden stayed on the dais as Biden walked along the guard. Once Sunday’s inspection was completed, the queen and the Bidens went into the castle for tea.

Having become Queen upon the death of King George IV in 1952, Her Royal Majesty has met with over a dozen U.S. presidents during her reign. Fourteen men have held the title during Queen Elizabeth’s sovereignty, and she has met in-person with 13 of them as of Sunday.

Take a look back at trips of presidents past: 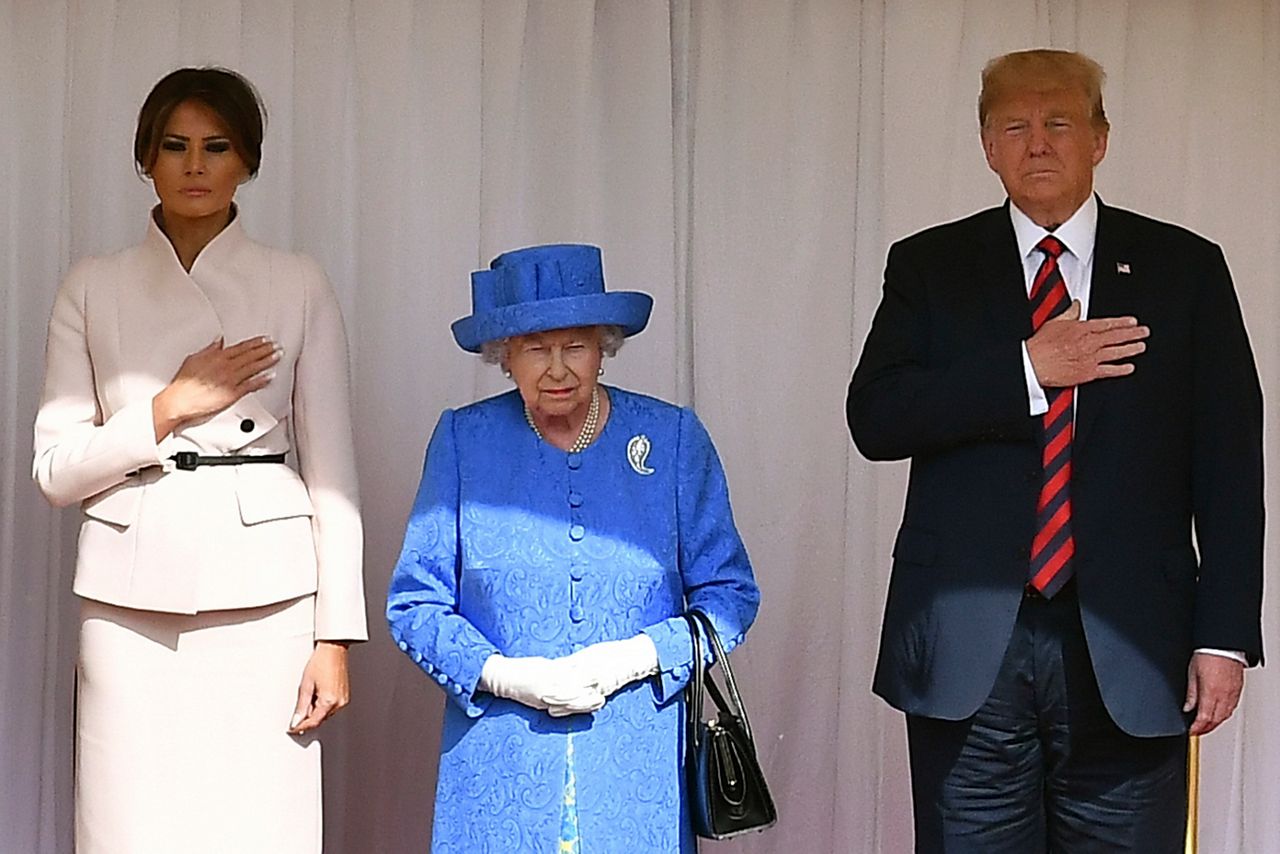 Trump also made a three-day visit to Britain in June 2019, where he and the Queen made a joint toast during the State Banquet at Buckingham Palace. 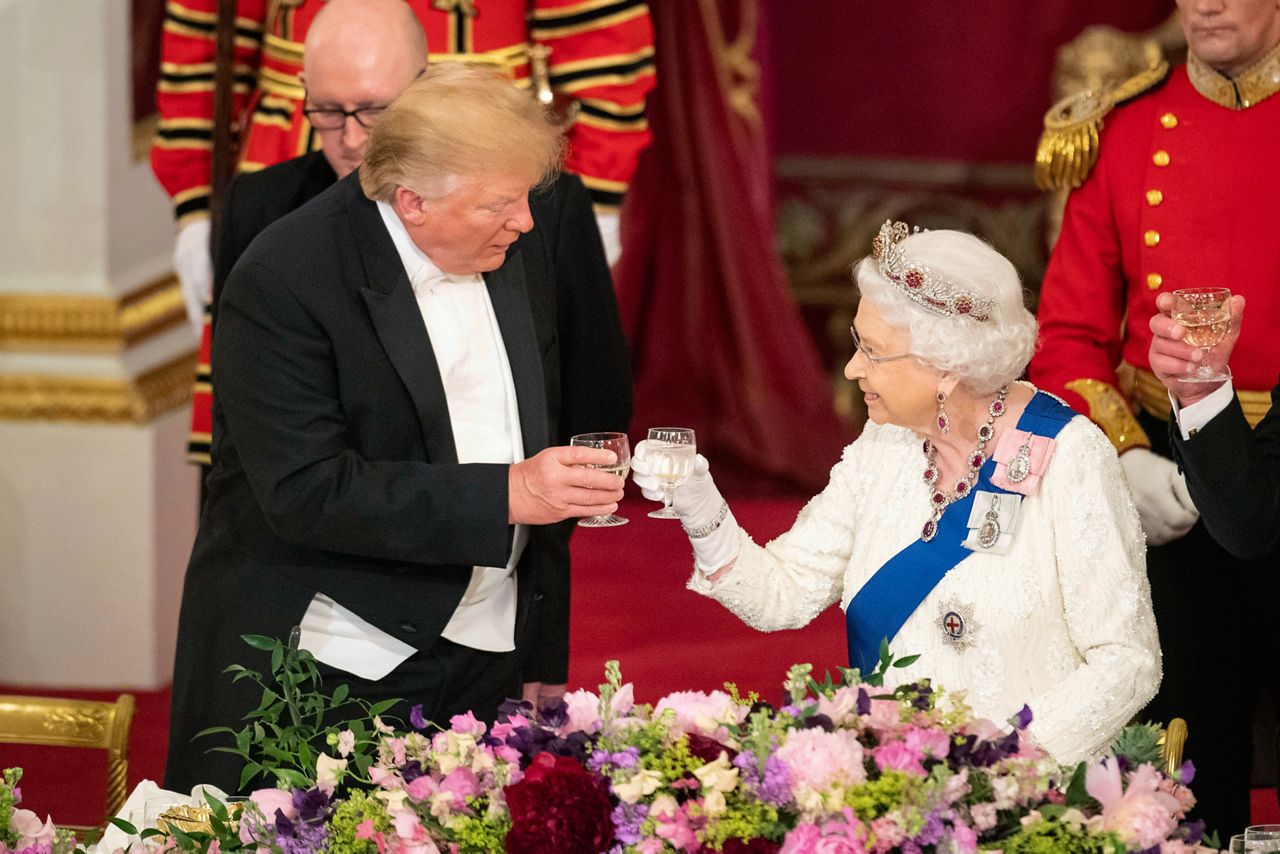 Prince Charles, Queen Elizabeth and Trump later sat next to one another at a meeting of leaders of the Allied Nations during commemorations for the 75th Anniversary of the D-Day landings at Southsea Common, Portsmouth, England. 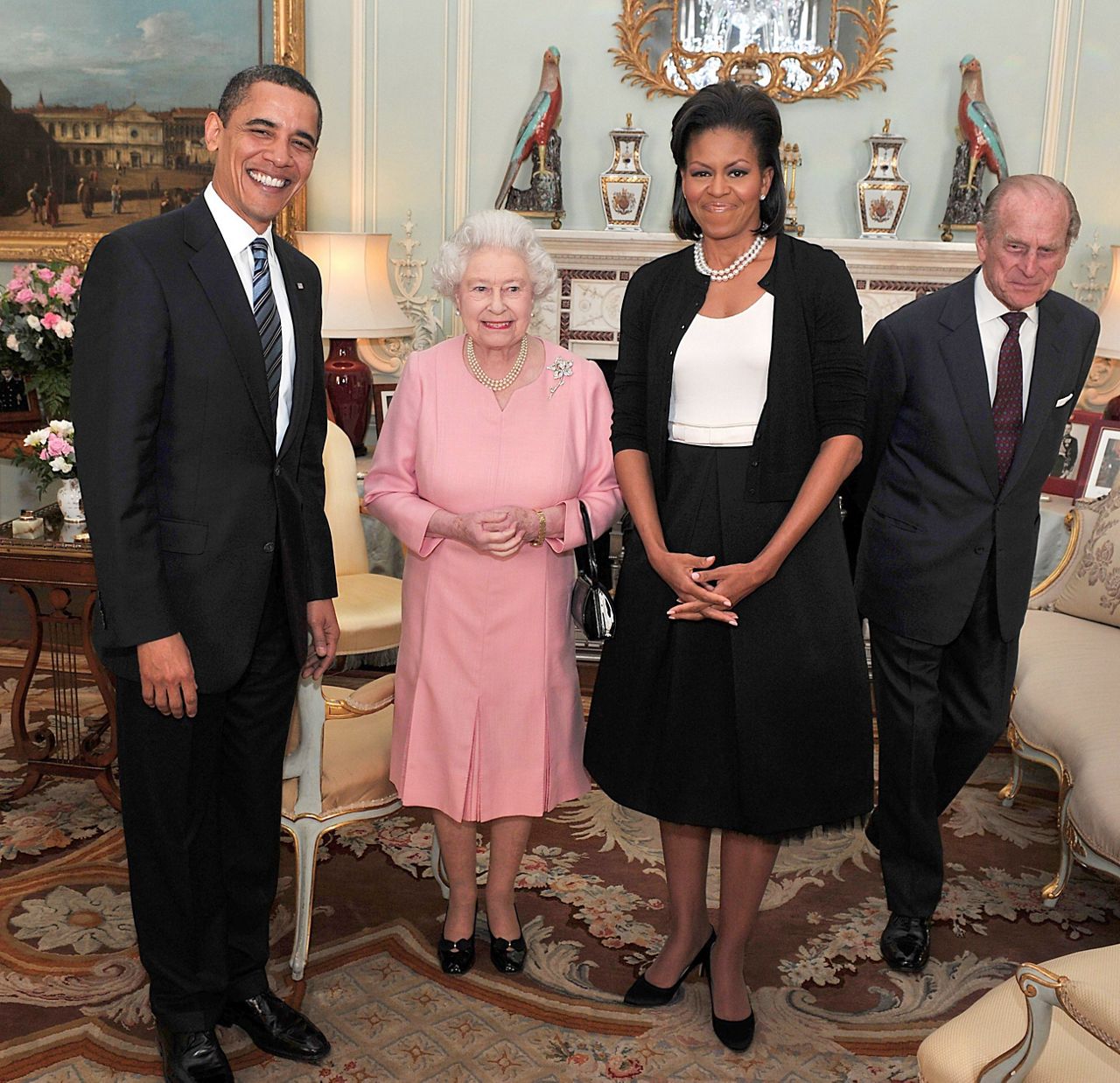 The Obamas visited again in May 2011 at the Queen’s invitation, and joined the monarch for a State Dinner. Obama also delivered an address to parliament during his visit. 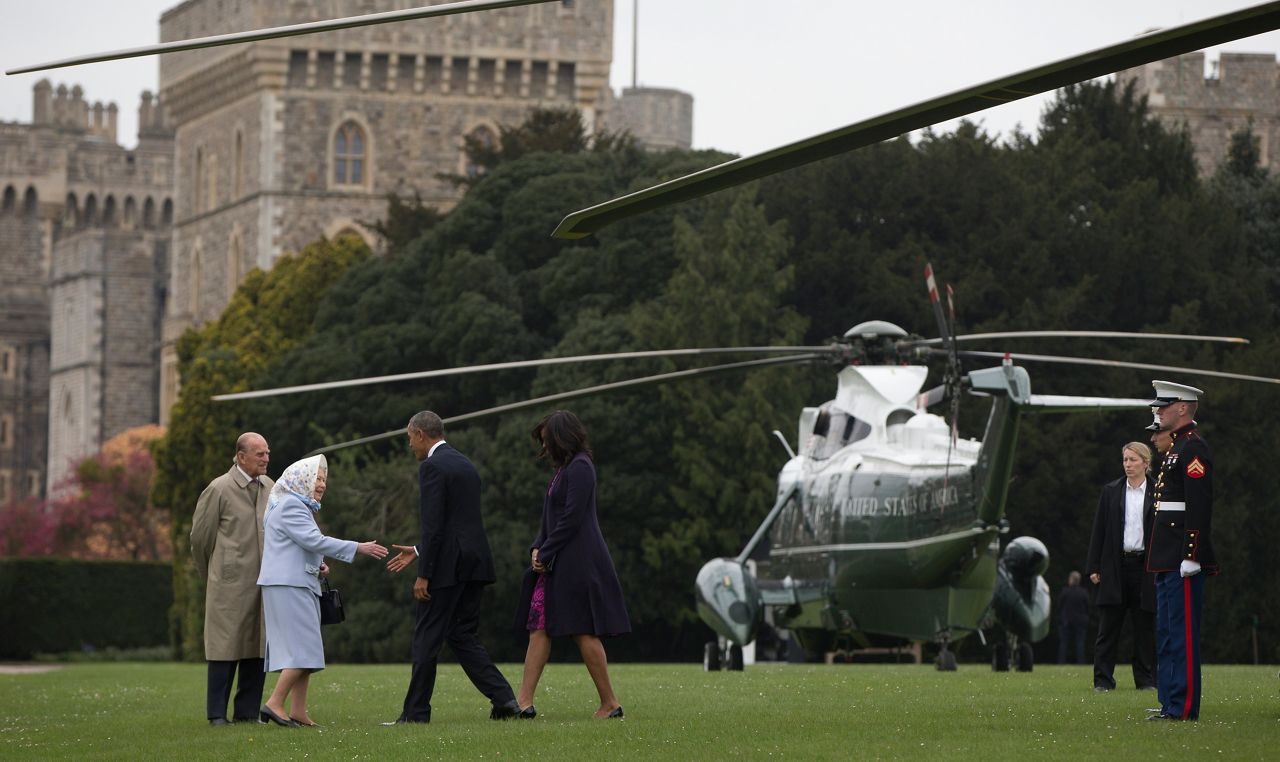 In September 2014, Obama traveled to the United Kingdom to participate in the 2014 North Atlantic Treaty Organization (NATO) meeting. In April 2016, Obama visited the Queen during a multi-stop tour of Saudi Arabia, the United Kingdom and Germany.

In July 2001, President George W. Bush visited the Queen at Buckingham Palace, and was given a tour of the British Museum and Cabinet War Rooms in London. 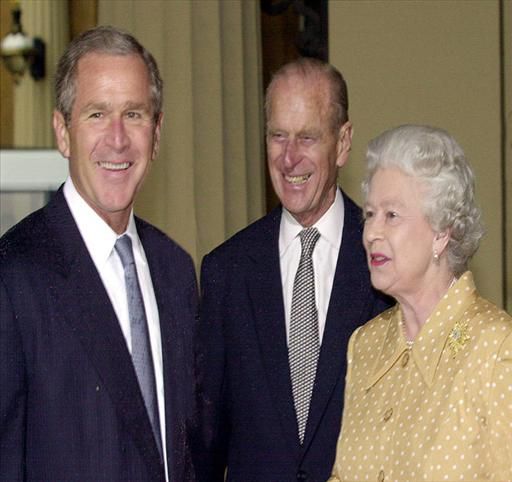 In November 2003, first lady Laura Bush joined the president for a four-day trip across the pond, visiting with the Queen and joining a State Banquet at her side. Like many presidents both before and since, Bush participated in D-Day ceremonies during a subsequent visit in June 2004. 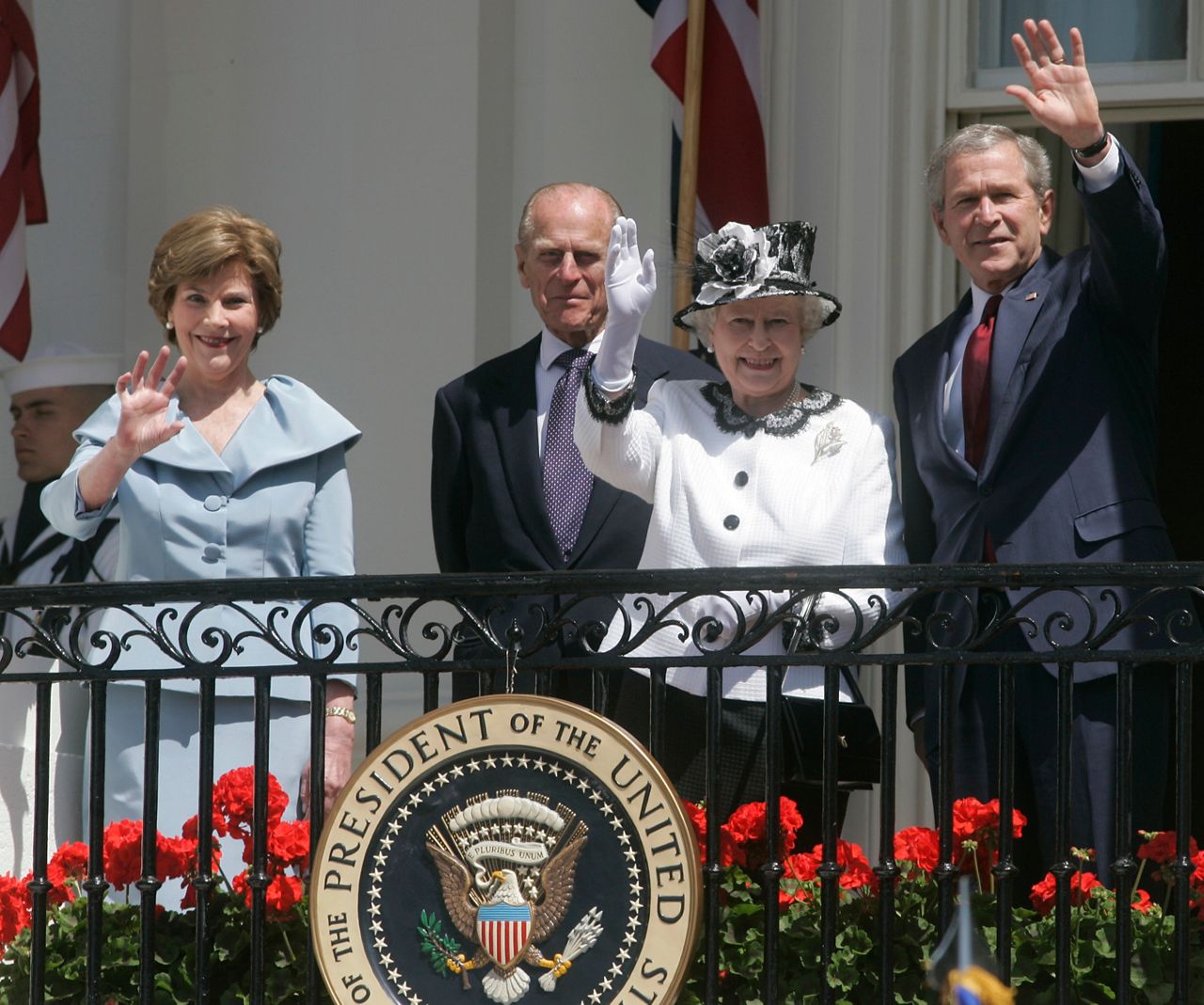 The Bush White House also welcomed Queen Elizabeth and Prince Philip stateside in 2007, where the president said in part: “Our two nations hold fundamental values in common. We honor our traditions and our shared history."

President William (Bill) Clinton first visited the Queen in June 1994, where he also met with the leaders of Canada, Poland, the Czech Republic, Slovakia, Australia, New Zealand, Norway, and Belgium. Clinton, along with other world leaders, participated in D-Day ceremonies during this trip. 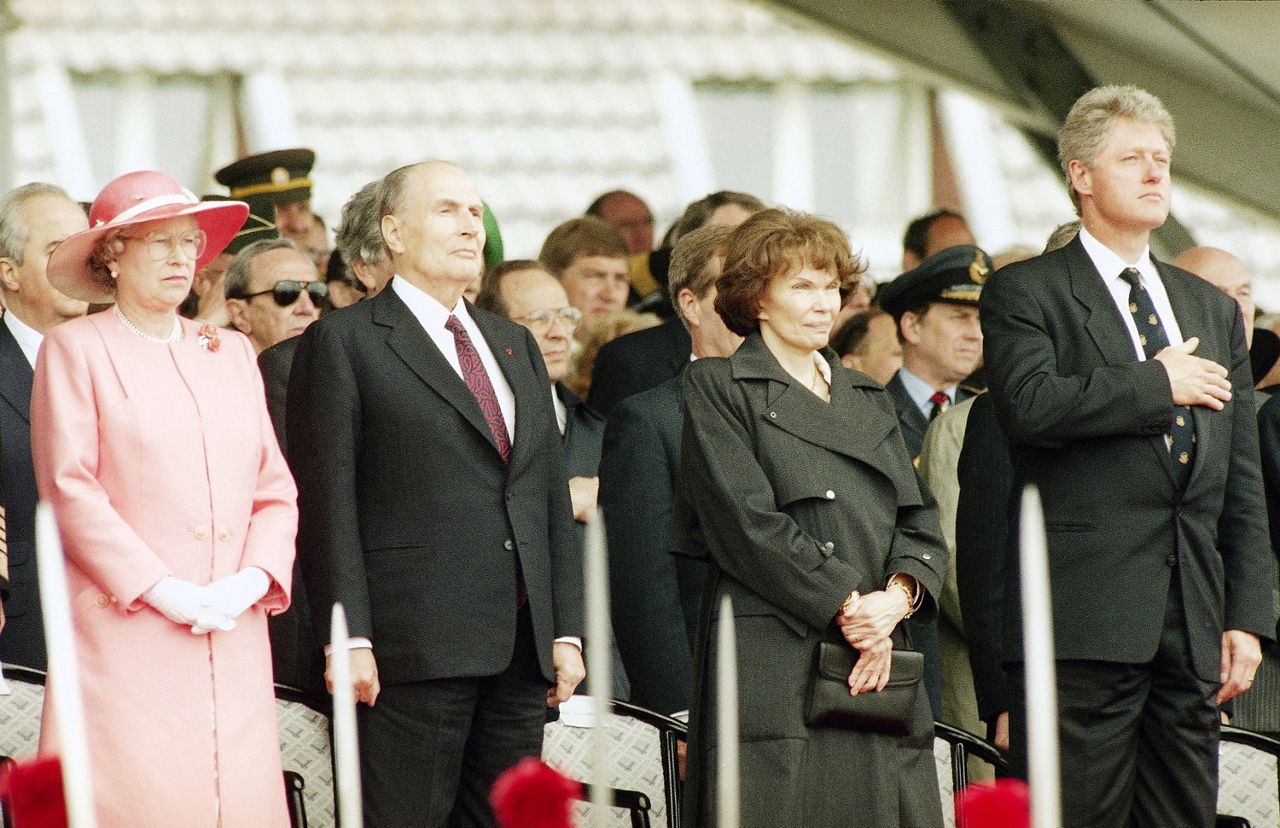 In late November 1995, Clinton met with Queen Elizabeth and then-Prime Minister John Major. In December 2000, Clinton traveled to Buckingham Palace to meet the Queen and delivered an address at the nearby Warwick University Arts Center. 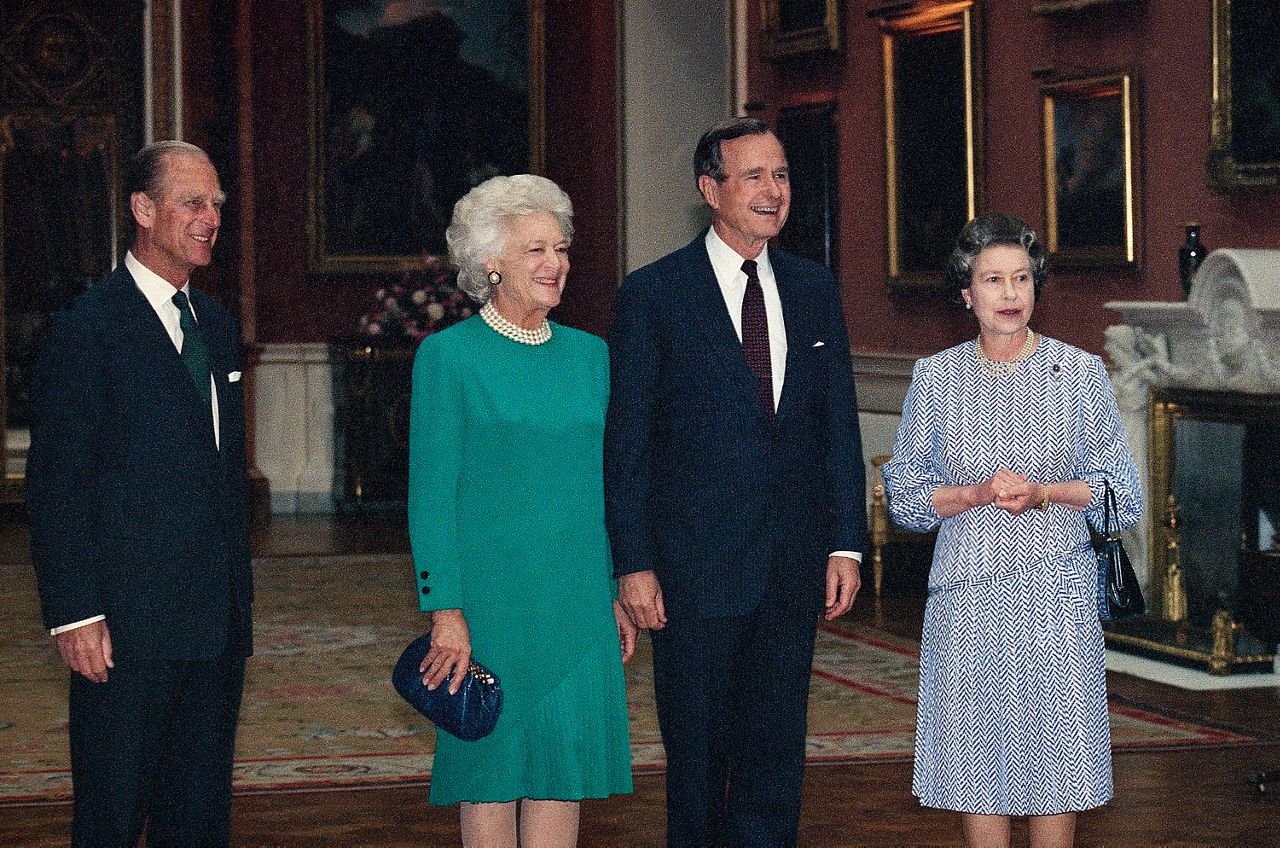 In 1991, the Bush family welcomed the Queen and Prince Philip to the White House during a four-day stop for the monarch and her husband. They were pictured on a tour of the White House grounds as they ceremonially reviewed troops. 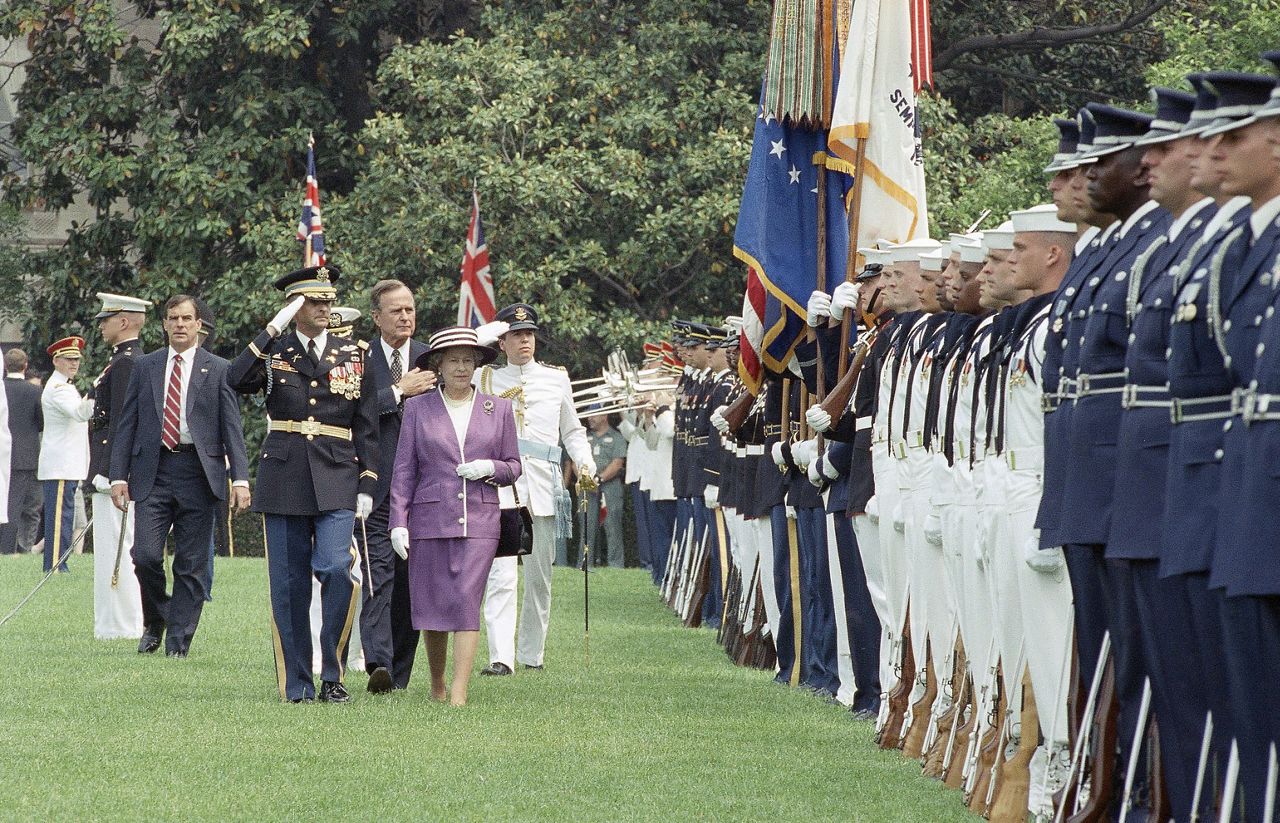 Queen Elizabeth II and President George H.W. Bush, along with Commander of Troops Col. Barrie Zais, left, review the troops after the Queen's arrival at the White House on Tuesday, May 14, 1991 in Washington. (AP Photo/Barry Thumma)

In July 1991, President Bush again met with the Queen when he traveled to London for a meeting of  G-7 leaders.

President Ronald Reagan traveled to the United Kingdom and visited with the Queen on at least three separate occasions between 1982 and 1988.

But he also visited with the Queen when he was running for president, having traveled to St. George's Hall of Windsor Castle for dinner on June 8, 1980. Reagan was sworn in as president on January 20, 1981. 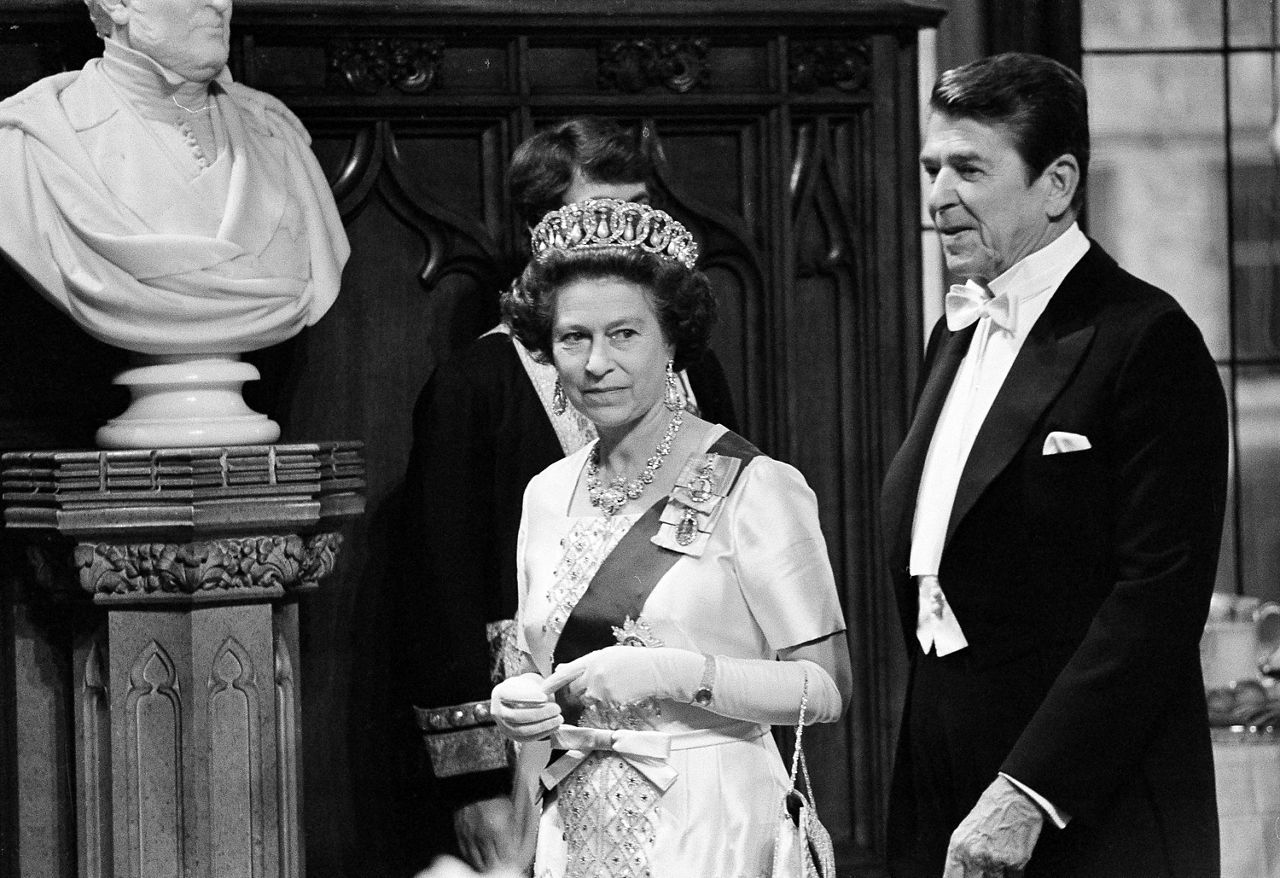 Reagan’s first presidential visit with the Queen came in 1982, and the two were famously pictured on horseback riding in the grounds of Windsor Castle.

President Reagan in 1983 met the Queen when she toured the western United States, although they did not convene at the White House — Reagan, first lady Nancy Reagan, the Queen and Prince Phillip met in Santa Barbara, California in March of that year.

The four met again in the United Kingdom to commemorate D-Day celebrations in 1984, where Reagan also attended celebrations alongside Premier Pierre Elliott Trudeau of Canada, Queen Beatrix of the Netherlands, King Olav of Norway, King Baudouin of Belgium, President Francois Mitterrand of France and Grand Duke Jean of Luxembourg. 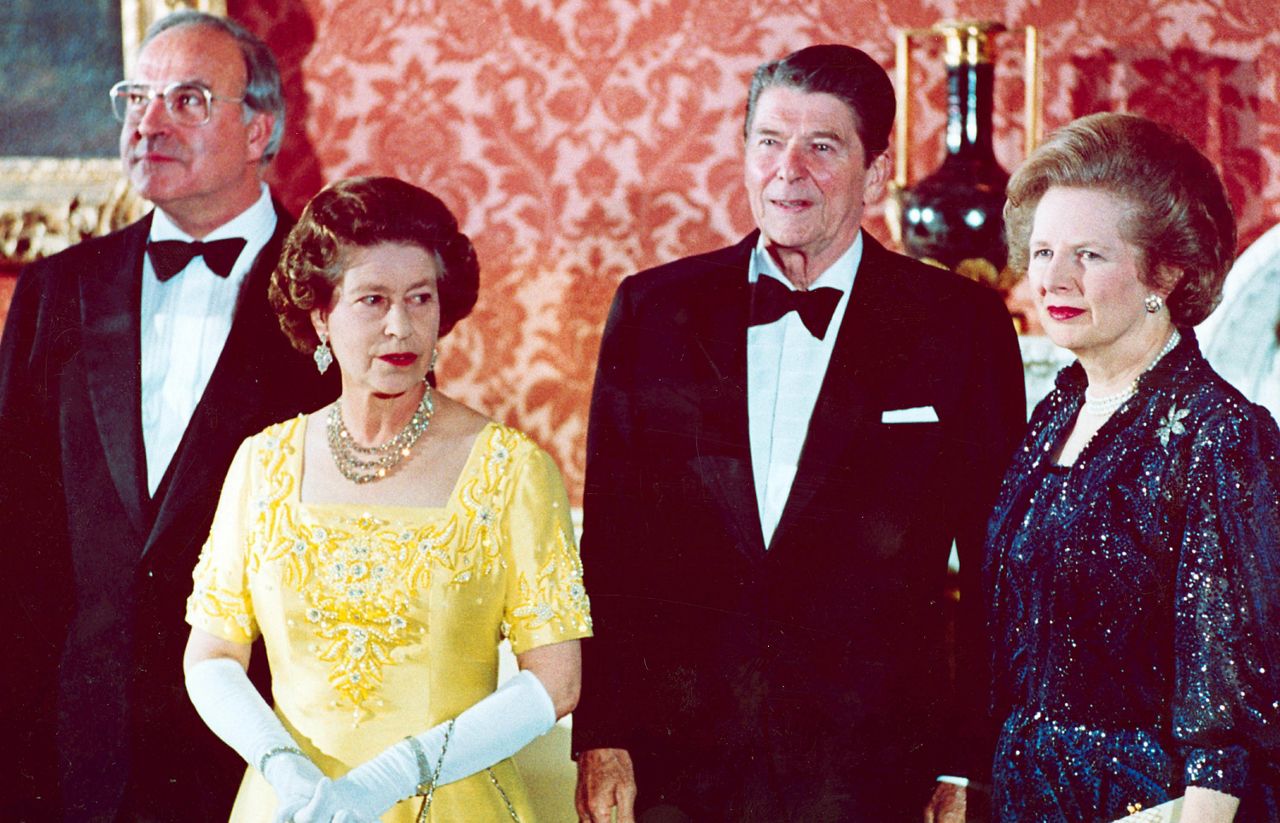 Subsequent visits also took place in London in 1988, when the president and Mrs. Reagan took tea with the Queen during a stopover following the Moscow Summit.

President Jimmy Carter met Queen Elizabeth one time during his presidency, traveling to the United Kingdom to visit with the monarch and other world leaders in May 1977. 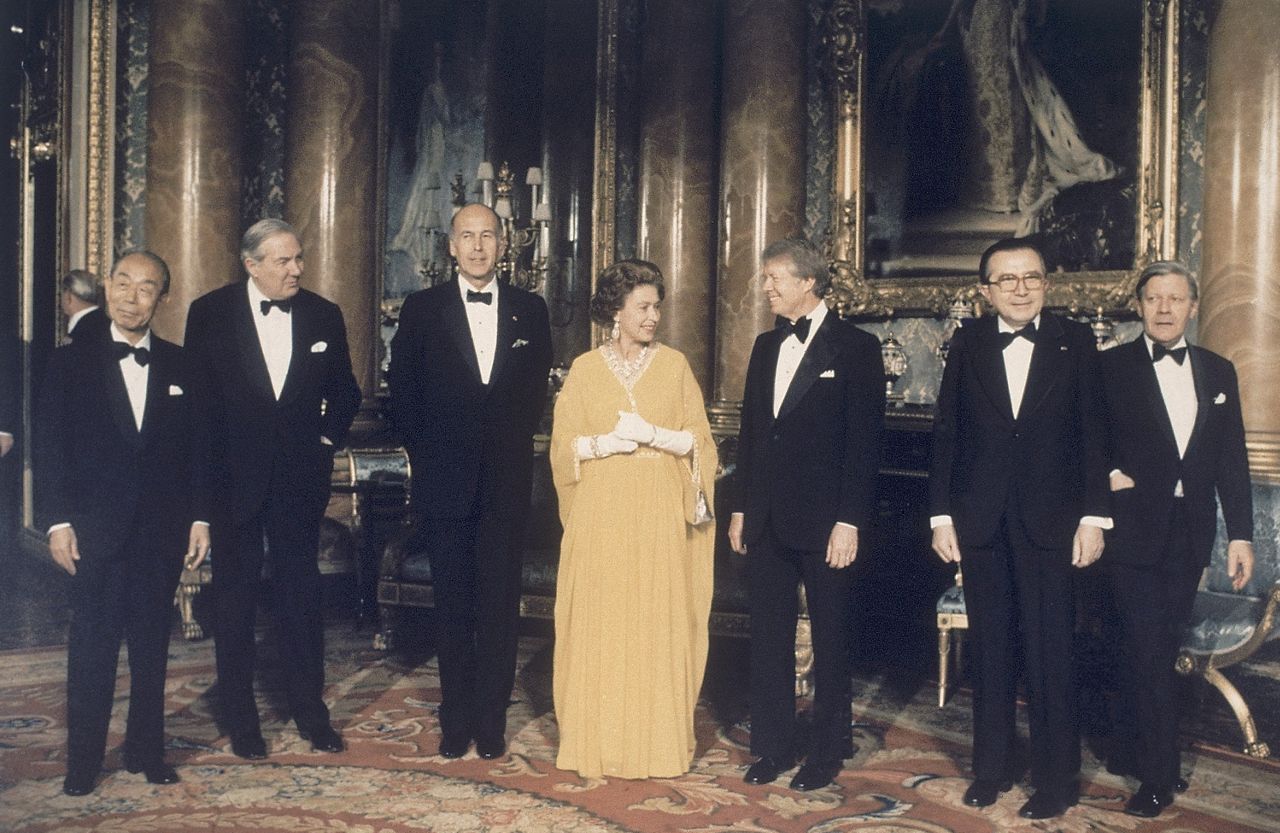 President Jimmy Carter meets the Queen Elizabeth II of England with others on his trip to Newcastle in England, May 1977. (AP Photo)

President Ford and Queen Elizabeth also met once during the former’s presidency, although their meeting occurred at the White House.

President Ford and first lady Betty Ford hosted the Queen and her husband for a State Dinner in the Rose Garden on July 7, 1976. As a ceremonial gift, the Queen offered Ford a soup tureen painted with images of the White House and Independence Hall.

President Nixon met the Queen at least twice when he served as vice president under Dwight Eisenhower, once in 1957 in Washington and again in New York in 1959.

Nixon visited the Queen for the first time as president in 1969, when he also met with Prince Philip, Princess Anne and Prince Charles for lunch at Buckingham Palace. 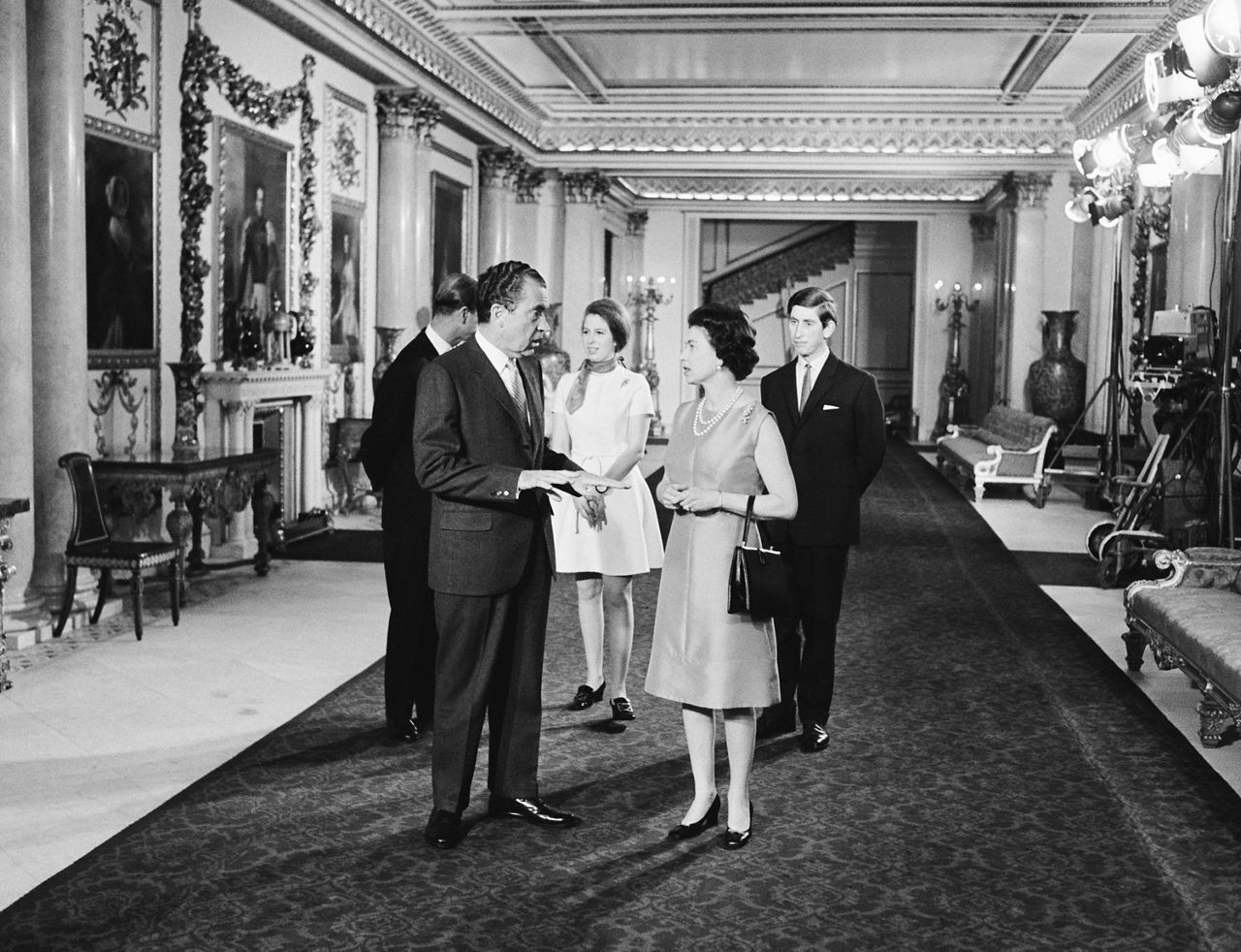 In 1970, Nixon and Britain's Prime Minister Edward Heath visited Chequers, Buckinghamshire to meet with the Queen.

Lyndon B. Johnson does not meet the Queen

Today, President Trump meets with Queen Elizabeth. We've received questions on whether President Johnson ever met with the Queen. In short, it's complicated, but to our best knowledge, LBJ and the Queen never met.

Our archivists have provided some more details. Please see below. pic.twitter.com/jnH23FdvhF

At the outset of Johnson’s presidency, the Queen was pregnant with Prince Edward. Johnson also never visited Britain while in office.

Prince Phillip did, however, meet President Johnson in 1963 at a stateside memorial service for the late President Kennedy a mere three days after he was assassinated.

Queen Elizabeth hosted a lavish royal ball for President John F. Kennedy and his wife, first lady Jacqueline Kennedy, in June 1961. A reported 500,000 people showed up in person for a chance to see the American president and his wife. 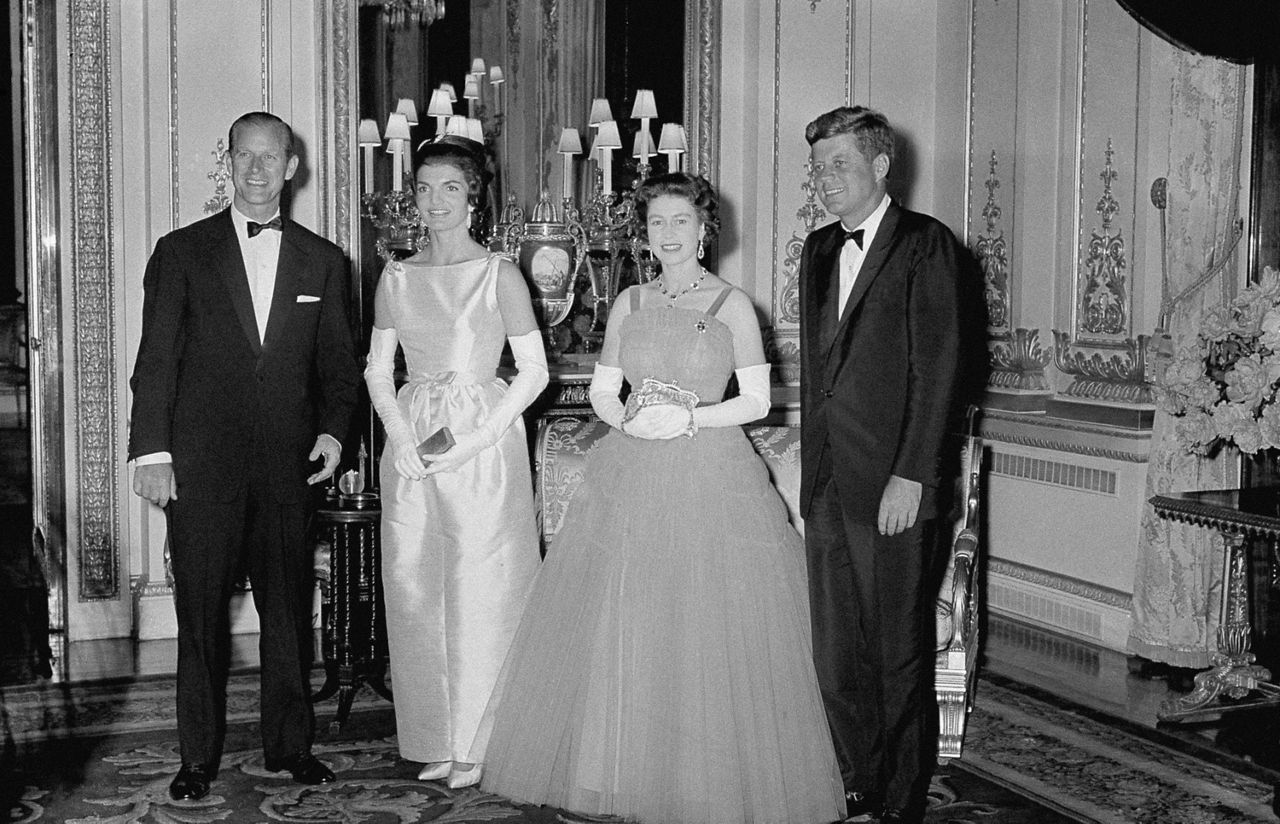 Following Kennedy’s assasination in 1963, the Queen — joined by Jackie and other Kennedy family members — dedicated a memorial to the late president  close to the River Thames at Runnymede, Surrey in 1965. 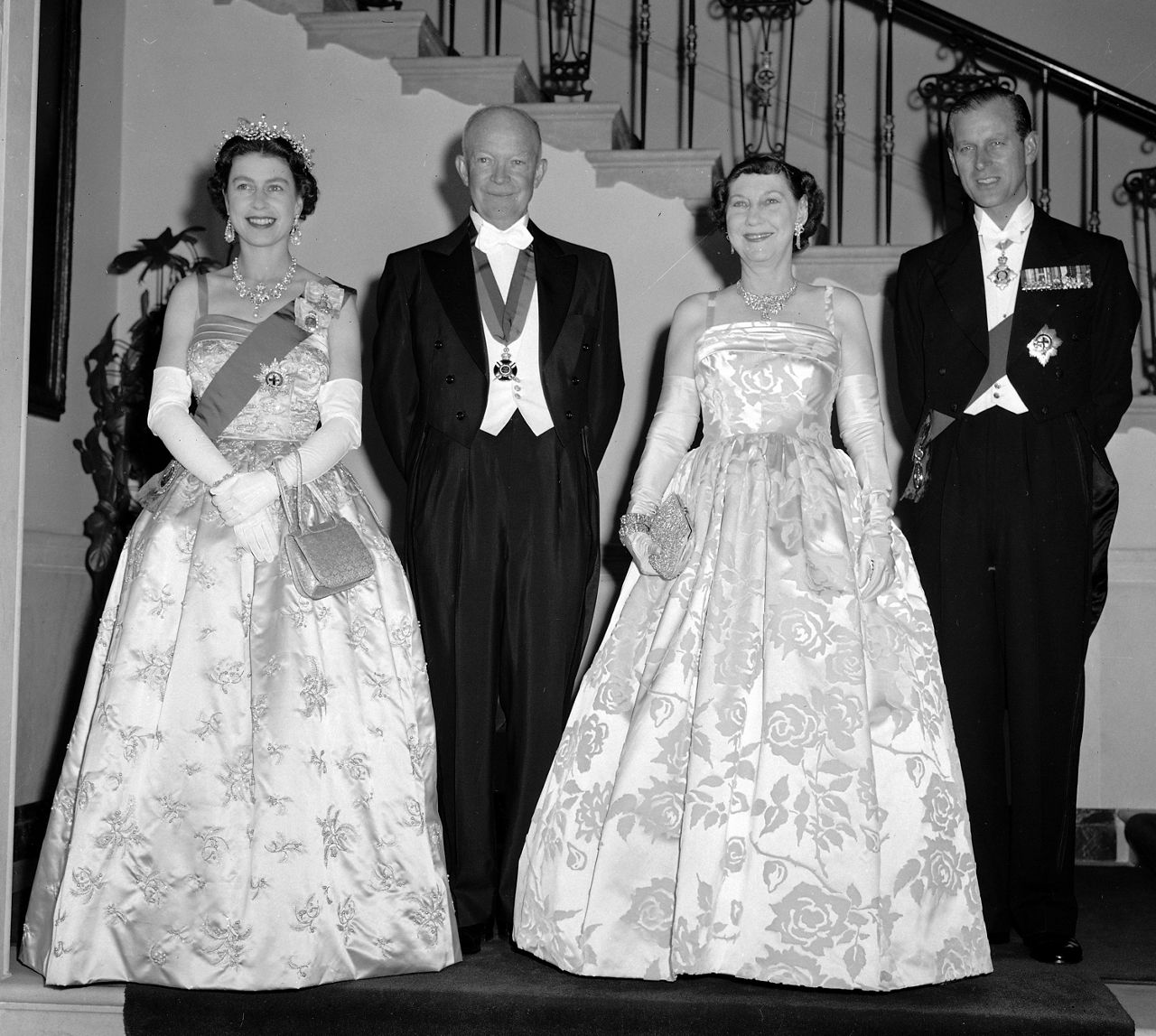 President Dwight Eisenhower and first lady Mamie are flanked by their royal guests, Britain's Queen Elizabeth II and her husband, Prince Philip, at the White House, in Washington on Oct. 17, 1957. (AP Photo, File)

Eisenhower visited the Queen in August 1959, meeting with Prince Phillip and several of their children at Balmoral Castle, Scotland.

President Harry Truman hosted then-Princess Elizabeth at Blair House in 1951, shortly before she became Queen following the death of her father in 1952. Truman was president from 1945-1953. 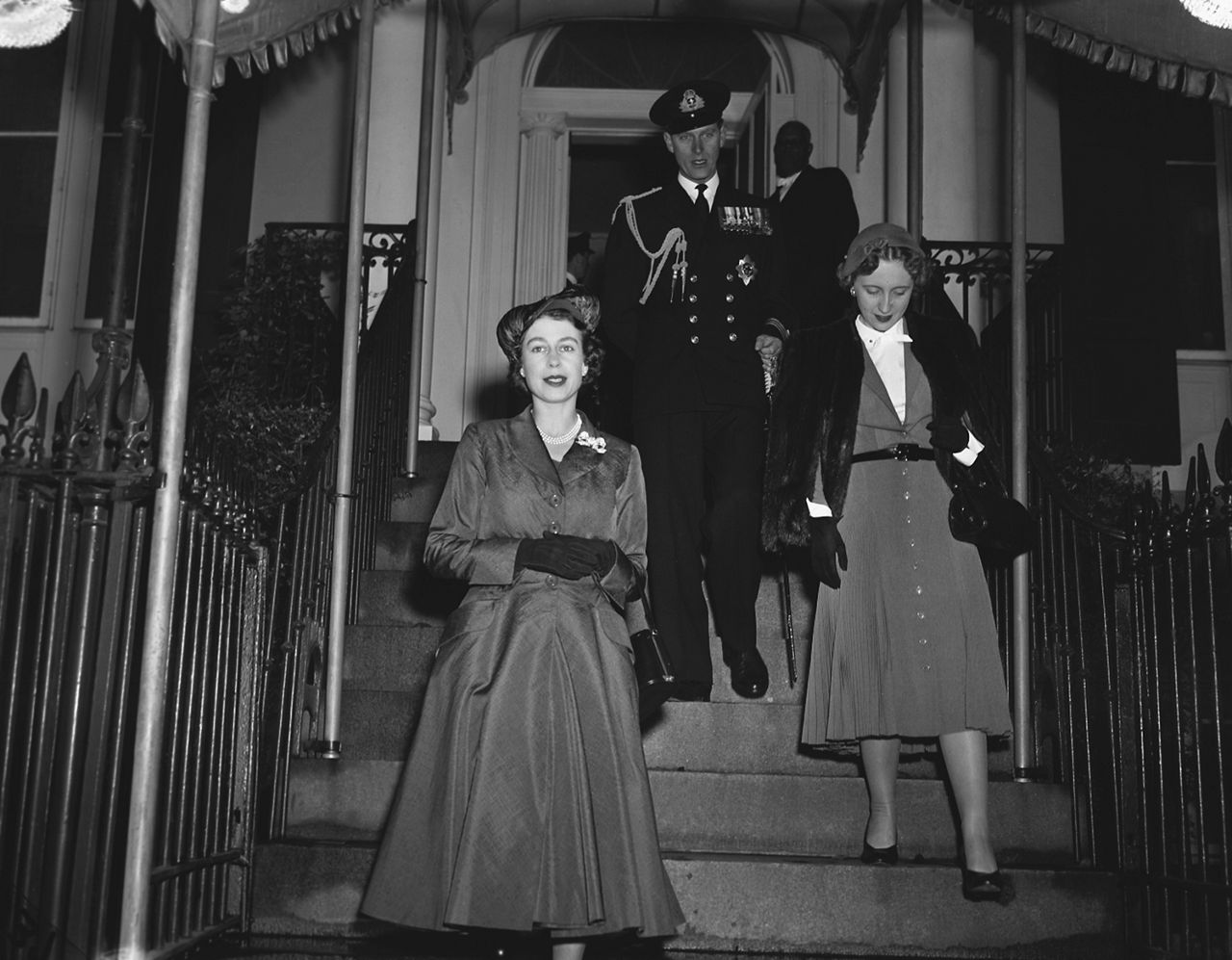 Much of the information in this article comes from the U.S. Embassy & Consulates in the United Kingdom and the White House Historical Association.