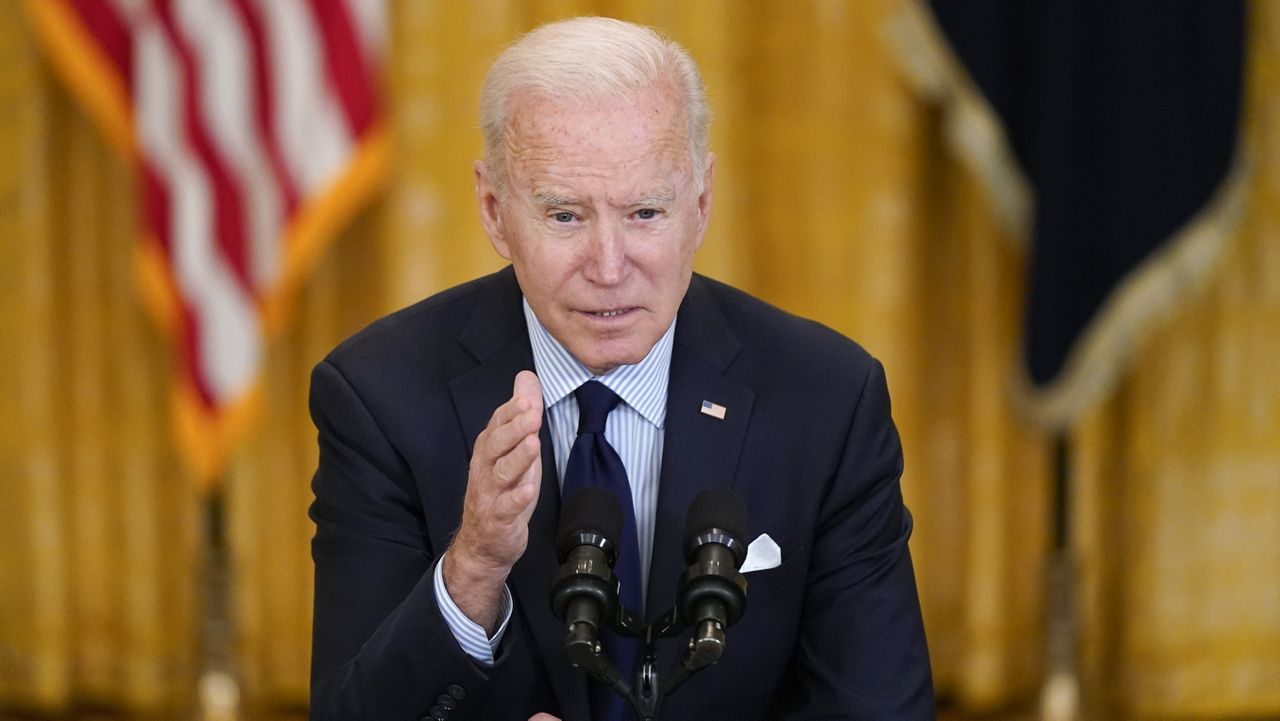 President Joe Biden speaks about the April jobs report in the East Room of the White House, Friday, May 7, 2021, in Washington. (AP Photo/Patrick Semansky)

Biden: U.S. economy is ‘moving in the right direction’ despite uptick in unemployment rate

President Joe Biden addressed the recently released April jobs report from the White House on Friday, saying despite the slight increase in the unemployment rate, the country is still on the road to economic recovery.

The jobs report, which was released by the Bureau of Labor Statistics on Friday, fell far short of the expectations of economists, many of whom predicted the country would add as many as 1 million jobs. But the economy added only 266,000 jobs last month, despite reporting an increase of 916,000 in March and 468,000 in February.

The unemployment rate also increased to 6.1%, up a slight tick from the previous 6% figure.

Biden on Friday said while the report might seem disappointing, his administration never anticipated linear economic growth as the United States begins to recover from the financial impact of the ongoing coronavirus pandemic.

“When we came into office, we knew we were facing a once-in-a-century pandemic and a once-in-a-generation economic crisis,” Biden said. “We knew this would not be a sprint, it would be a marathon. Quite frankly, we are moving more rapidly than I thought we would.”

The president went on to say that his $1.9 trillion American Rescue Plan, which he signed into law in March, was designed to help the country long-term, with funding set to be released throughout the remaining months of the year.

“When we passed the American Rescue Plan, it was designed to help us over the course of a year, not sixty days,” the president said, adding: “Today, there is more evidence our economy is moving in the right direction, but it's clear we have a long way to go.”

A big chunk of funding from the package is set to be released to state and local governments later this month, Biden said. The package allocates $350 billion in emergency funds for state, local, territorial, and Tribal governments to balance their budgets and address emergency concerns related to the pandemic. Biden tapped Gene Sperling to serve as his COVID relief czar in March, putting the Clinton and Obama administration veteran in charge of overseeing distribution of funds from the $1.9 trillion COVID-19 relief bill.

State and local governments were forced to cut jobs at alarming rates as revenue decreased across the board, and many experts estimate upwards of 1.3 million local government employees — like firefighters, police officers, sanitation workers, and more — are still out of work.

Biden said while not all of those jobs will be recovered immediately, cities “will see those jobs and state and local workers coming back starting this month.”

In previous months, the economic rebound has been so fast that many businesses, particularly in the hard-hit hospitality sector — which includes restaurants, bars and hotels — have been caught flat-footed and unable to fill all their job openings. Some unemployed people have also been reluctant to look for work because they fear catching the virus.

The administration has received growing criticism from Republicans that the extension of federal unemployment benefits to an additional $300 per week, which is set to last through Sept. 6, is discouraging people from seeking work.

Recently, Republican Govs. Greg Gianforte of Montana and Henry McMaster of South Carolina announced that their states will withdraw from the program on June 27 and June 30, respectively.

When asked Friday if he thought the increased federal unemployment benefits had any impact on lowering return to work in some job sectors, Biden responded: “No, nothing measurable.”

Treasury secretary Janet Yellen shared Biden's sentiments during a press briefing on Friday, saying she does not think the added unemployment benefits are "really a factor that's making a difference" in keeping people from returning to work.

Yellen said while the administration is certainly hearing from businesses that they are struggling to find workers, she pointed out that over 300,000 workers were added across the badly-impacted leisure and hospitality industry last month alone.

“But when we look across states, across sectors or across workers, if it were really the extra benefits that were holding back hiring … you would expect to see lower job finding rates,” she said. “In fact, what you see is the exact opposite.”

The Treasury secretary said that she believes "we will reach full employment next year," a prediction she made while selling Biden's $1.9 trillion COVID relief bill to the public months ago.

Yellen instead suggested a number of other reasons why Americans might be hesitant to return to work, including an absence of child care as some children only return part-time to in-person learning, concerns about health consequences should they contract the virus and potential setbacks in certain industries due to supply shortages.