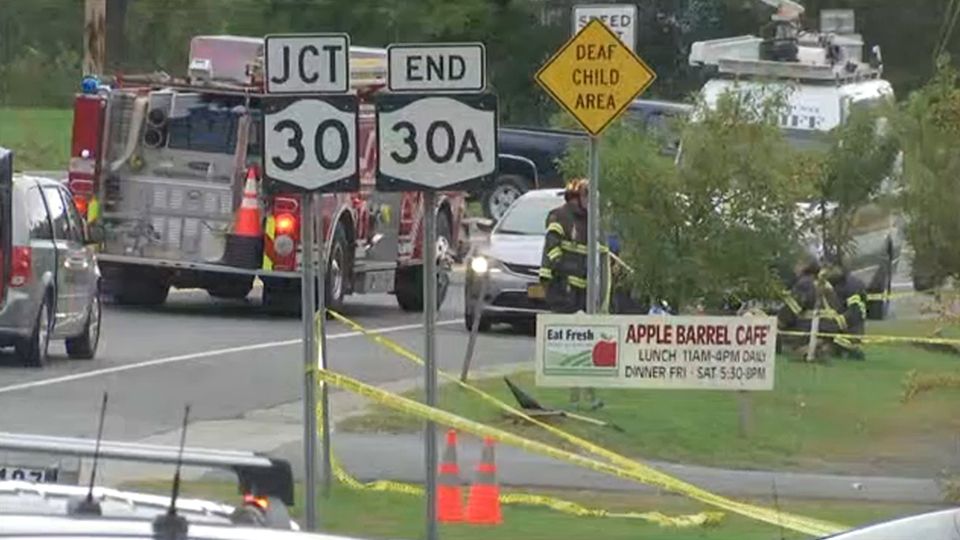 State Police confirm 20 people are dead after a crash Saturday in the town of Schoharie, about 40 miles southwest of Albany, in what the National Transportation Safety Board is calling the deadliest transportation accident in the country since 2009.

Police have not officially identified anyone killed, but we are hearing from loved ones who say the group was on its way to a 30th birthday celebration. GlobalFoundries confirmed that two of the victims were employed there. A source also tells Spectrum News that the pedestrians killed were two men having lunch at the Apple Barrel.

A sister of one of the victims tells us the group in the limousine was headed for Ommegang Brewery in Cooperstown. The brewery says they had no reservations for the group Saturday, but it doesn't mean the brewery wasn't their intended destination.

"I feel like my heart is sunken," says Karina Halse, who adds her sister Amanda was one of the victims in the limousine. "It's in a place where I've never felt this type of pain before. I wouldn't want anyone else to go through what I'm going through and what my family is going through."

This is Amanda Halse and her boyfriend Patrick Cushing. Amanda’s younger sister says they were on their way to Ommegang Brewery when they and 18 other were killed in that horrific Schoharie crash. @SPECNewsAlbany pic.twitter.com/xjSk0W4yhW

Police said a 2001 Ford Excursion limousine was traveling southwest on State Route 30 and failed to stop at the intersection, traveling across it and into a parking lot. There, it struck an unoccupied 2015 Toyota Highlander, as well as fatally striking two pedestrians. Police say 18 people, all adults, were killed in the limousine, including the driver. Autopsy results at Albany Medical Center are pending.

A candlelight vigil is being arranged for Monday night at 7 p.m. on the south side of the Mohawk Valley Gateway Overlook Bridge.

Lauren Lemos, who said she is a cousin of four of the victims of the #Schoharie limousine crash that killed 20 people Saturday, reflects on the loved ones she and her family lost. pic.twitter.com/ChvWmXvJyp

NTSB Chairman Robert Sumwalt said they would not determine the cause of the crash onscene, nor will they speculate on a cause.

The NTSB is investigating, among other elements, the roadway on which the crash occurred. We spoke by phone with Schoharie Town Supervisor Alan Tavenner, who said the DOT did a significant realignment to the intersection about a decade ago.

"We've had a lot of problems with trucks on it ever since, and a few years ago, the DOT banned tractor trailers from using that section of the road," Tavenner says.

Some residents we spoke with echoed the concerns about the roadway.

Many of the victims are from Amsterdam, and Assemblyman Angelo Santabarbara says the city is grieving.

In a statement, Gov. Andrew Cuomo said he's directing state agencies to provide all necessary resources to aid in the investigation.

This is a devastating account from one witness who was at the scene of Saturday’s crash that killed 20 people in Schoharie. She had just arrived to Apple Barrel to do some shopping when she heard what sounded like an explosion. @SPECNewsAlbany pic.twitter.com/JMHjhOp4ZA