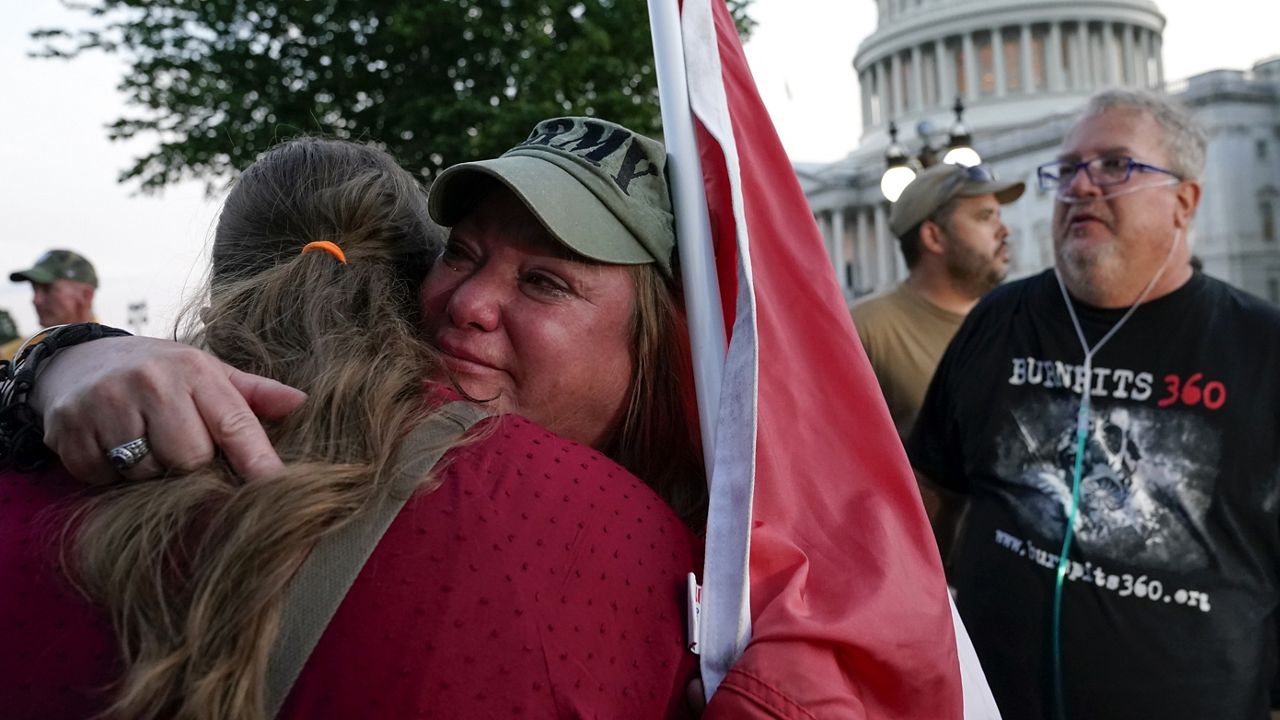 Kimberly Hughes, second from left, widow of U.S. Army Reserves Maj. Gary Hughes, embraces a supporter after a news conference after the Senate passed a bill designed to help millions of veterans exposed to toxic substances during their military service, Tuesday, Aug. 2, 2022, on Capitol Hill in Washington. (AP Photo/Patrick Semansky)

"The burn pits were everything from tires to computers to refrigerators, basically anything that there was no good way to dispose of without shipping it back to the United States or shipping it out of the country, the answer was just toss it in the burn pit and in the early days especially there was no consideration for the location of burn pits or prevailing winds or any of that kind of thing," he said.

Howard said veterans exposed to those pits often struggled to get the coverage they deserved.

"Previously, if a veteran wanted to file a disability claim for one of these illnesses, they had to go through a lengthy process gathering all kinds of documentation and jumping through hoops," he said.

Federal legislation adding 23 new illnesses to the presumptive list for benefits, meant to streamline the cumbersome process, has long had bipartisan support and even passed the Senate in June. However, following House passage, a procedural vote in the Senate failed last week as some Republicans changed their vote while pushing for amendments, specifically one regarding funding.

After floor votes on those amendments, 86 senators did vote to approve it Tuesday night.

"Everyone kind of made it clear at the time that it was going to be a temporary snag but the issue was always, you've got veterans that are waiting for that healthcare that might potentially die in the interim so when we found out that it passed last night we were overjoyed," Howard said.

Sen. Kirsten Gillibrand, D-NY, called it a day to celebrate.

"It's a day that Congress actually worked and it worked for the people who deserved it the most, the men and women who put their lives on the line for this country time and time again, never ever complaining and never giving up," she said tearfully.

Howard pointed out the legislation will help other Veterans One-Stop clients as it adds new countries to the presumptive list for Agent Orange exposure and lengthens the time Gulf War vets have to make claims about potential exposure to depleted uranium.

"There's a lot of different pieces of this. It wasn't strictly about burn pits so we're very happy. It's going to affect a lot of veterans here in Western New York," he said. "We're excited about that."

Howard said while he doesn't know of any current clients who were struggling with the VA benefits process, the center is compiling a list of previous ones who had given up and plans to preemptively contact them about revisiting it.