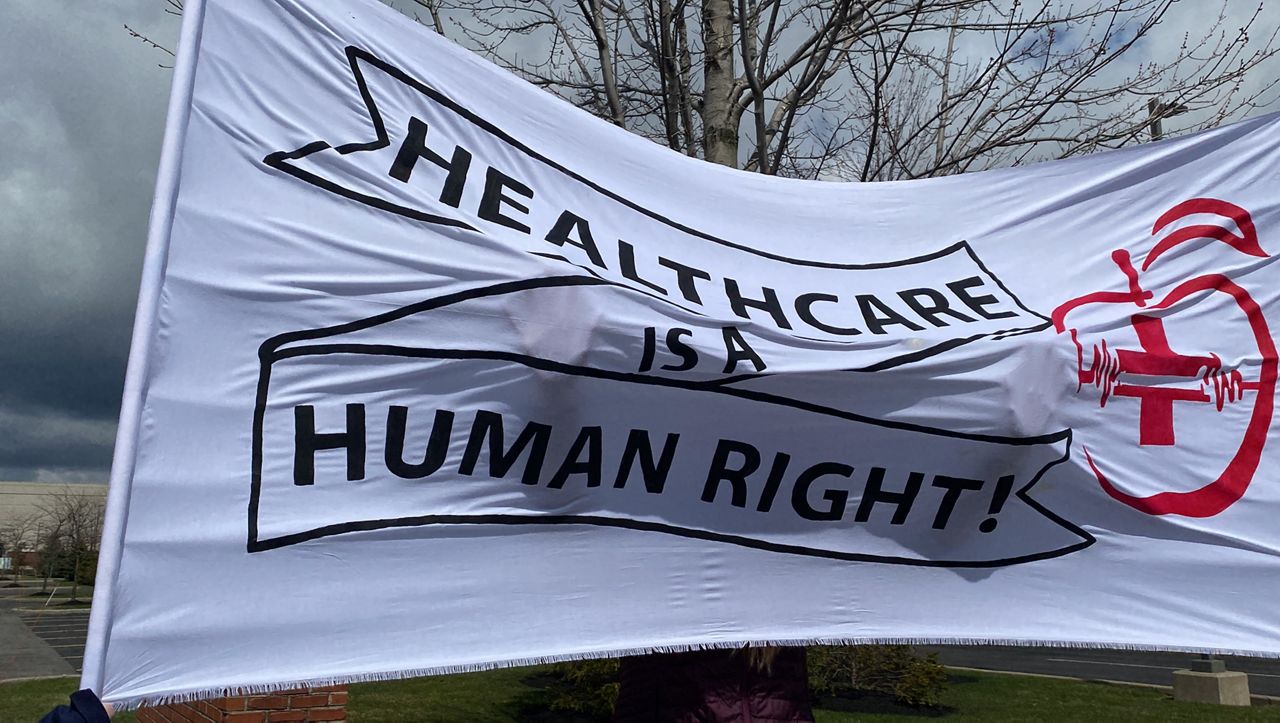 BUFFALO, N.Y. —   Demonstrators strewed crime scene tape at the Fidelis Care Buffalo Regional Office on Saturday, as they alleged theft and negligence by private insurance companies led to the suicide of Daniel Desnoyers, 29, of Buffalo in 2019.

Leading up to the tragedy, Desnoyers’s father, Scott, said Daniel learned his insurance had been canceled after being denied a prescription refill, which would have cost $250 out-of-pocket.

“He found out he was late paying a $20 payment," Scott said of Daniel. "He actually took out his card that day and made the $20 payment and Fidelis told him that his plan would be reinstated the next billing cycle [on] May 1."

Scott said by the time Daniel’s plan was to be reinstated for him to receive his prescription for Risperidone, a medication used to treat certain mood and mental disorders, it was too late.

“It was on April 9, three years ago to the day, that I saw his suicide note on Facebook where he told us that he’s sorry for hurting those who care [and] that this is selfish, he’s sure, but he’s decided death by drowning because he couldn’t get above the pain," Scott said.

Scott has vowed to use his son’s story as a catalyst for change in the nation’s approach to health care. He was joined outside of Fidelis Saturday by local politicians and advocates of the New York Health Act, which would guarantee every resident of the state universal, single-payer health care. The calls for change also go beyond the state level, as the fight for systemic change persists.

“I’m not here fighting to save Danny; I missed that chance," Scott said. "I’m here fighting for everyone else’s kids. Because nobody needs to live my life. [I wake up] every day without [my] kid because he missed a $20 payment to his insurance company.”

In addition to calling for the resignation of Fidelis Care founder Father Patrick Frawley, Daniel’s family wants to see accountability among high-ranking officials.

Scott cited a tweet from then-Senator Kamala Harris, in which she shared Daniel’s story as grounds for support of Medicare For All. But weeks later, her proposal for a plan included allowing private insurance companies to compete. Harris, who serves as vice president under Joe Biden, suggested during his campaign that he would veto Medicare For All.

“She used Danny’s story as a commercial for the ones who murdered him," Scott said. "This isn't right. We need to change this system. And we’re not going to do it by people staying home and cheering us on from the sidelines. We all need to get out here in the streets and change this system.”

Scott is continuing to fight for change in hopes that no more lives will be lost due to insurance denial.

“I want the corporations that kill our children to be as dead as they make our children," he said. "Not the people, but the businesses. Insurance has no business in our health care system. I want to end all for-profit health insurance industry.”

Spectrum News 1 reached out to Fidelis Care for comment and is awaiting a response.