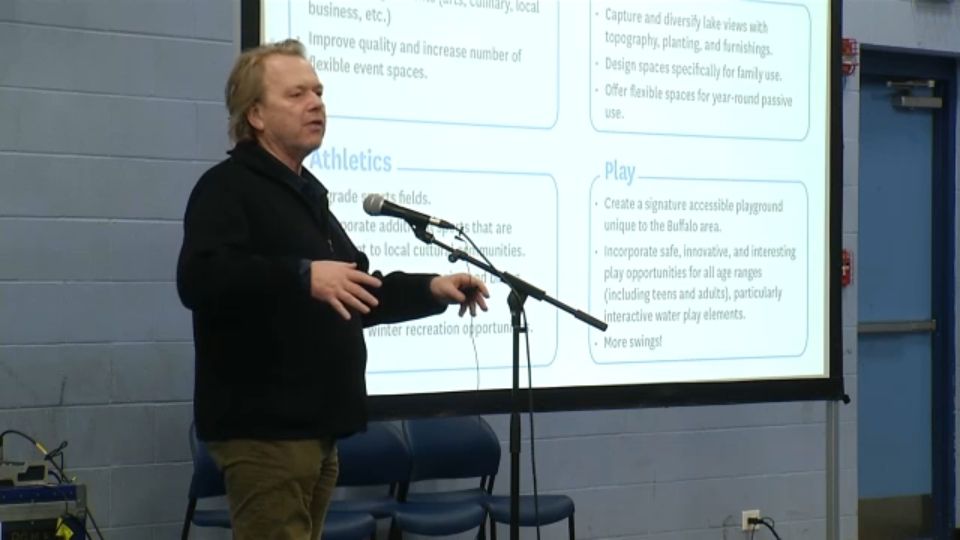 Buffalo's LaSalle Park is undergoing a $50 million transformation thanks to a donation back in October from the Ralph C. Wilson, Jr. Foundation.

He says residents have spoken loud and clear that they like their sports at the park.

"The emphasis on athletics completely stays, so the fields are entirely recreated and updated in the design," Van Valkenburgh said.

He says he enjoys playing soccer there, and he was impressed with the presentation.

He has one hope from the redesign.

"Blocking it off from the highway just to deaden the noise is one of the biggest things," said Zelko.

Paula Kelman is on the Board of Directors for the Barkyard.

She has concerns about how the dog park's shape could change with the redesign.

"They kind of made it from a big odd square to kind of a blob, so I'm worried about the dogs going into the corners and narrowness. They need space to run," Kelman said.

Still, she says she's overjoyed with the overall plan that includes more varied and colorful plant life and parking moved away from the waterfront.

Van Valkenburgh says he also plans to make the bridge going into the park flatter so you can see what's ahead as you enter.

"So, big decisions like that will be there. I mean, we are thinking of changing the circulation of the road. Right now, the road's kind of relentless down the edge. We think it would be cool if it bent in some places," Van Valkenburgh said.

A revised design will be presented next month.

Then a final design presentation will take place in April or May.

Van Valkenburgh will start preparing for construction this summer.