​GETZVILLE, N.Y. — ​​Police in Amherst are investigating an apparent case of arson at an anti-abortion center in Getzville.

CompassCare's president says graffiti was left on the building saying "Jane Was Here," which he says refer to the pro-abortion right group Jane’s Revenge. 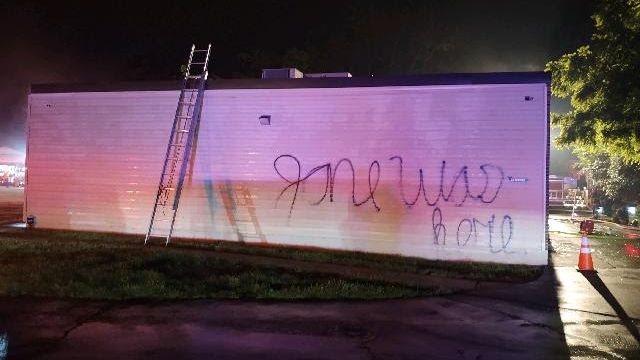 That group was connected to a similar case of arson in Madison, Wisconsin in May.

"We have been in contact and have been implementing security measures, and we have been for the last several weeks. And at this point there's no reason to be worried or afraid as the organization is secure," Harden said, adding that the damage inside is "extensive."

We know the Erie County Sheriff's Fire Investigation Unit, with its Accelerant Detection K9, was called to assist with the investigation.

CompassCare is holding a press conference at 12. @revathijanaswam will follow this today.

Amherst Police have not confirmed the graffiti or the involvement of that group.

“They broke the two main windows in the reception area and the nurse’s offices and the nurses office and lit the fires in those places,” Harden said. “The fires essentially were contained to the medical side of the office. But the smoke damage was extensive throughout as well as a lot of fire damage. Pretty sure all the equipment has been destroyed. We’re not sure. We haven’t been able to get in and turn it on. All of our power is out. So yeah, there’s a lot we don’t know yet.”

Harden says the clinic will be moved to another location to start serving their clients again Wednesday. He says he will not disclose the new location to the public at this time, but will share that information to clients.

The Department of Alcohol, Tobacco, Firearms and Explosives says it has responded to the incident, and the Erie County Sheriff's Fire Investigation Unit has sent its Accelerant Detection K9 to assist in the investigation.

Two town of Amherst volunteer firefighters were hurt in the fire.

Harden says the damage inside is "extensive."

Amherst Town Supervisor Brian Kulpa says a violent response is never the answer, and there’s no place in Amherst for such attacks. He says law enforcement will ensure those responsible will be held accountable for their actions.

If anyone has any information related to this incident, you are asked to contact the Amherst Police Dept. at 716-689-1322.

Spectrum News 1 has reached out to various agencies for more information.