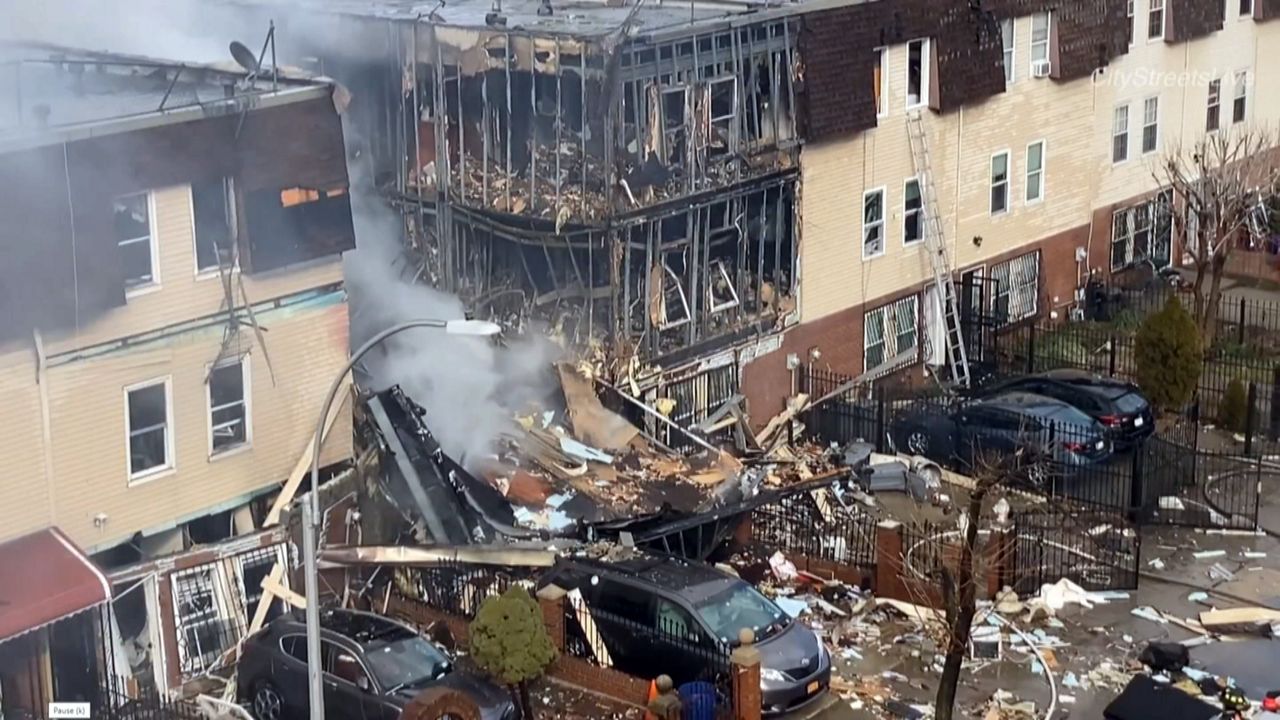 First responders at the scene of a fire and partial building collapse Tuesday in the Bronx.

By Anna Lucente Sterling and Bill Devlin The Bronx
SHARE

BRONX, N.Y. — One person was killed and seven others were injured after an explosion on Tuesday caused a massive fire on a residential block in the Bronx.

FDNY crews battled the two-alarm fire that started at a residential building located at 869 Fox Street near Intervale Avenue in the Longwood section of the borough and then spread to several other nearby buildings.

Additionally, an 82-year-old female and a 68-year-old female, both stable but in critical condition, were hospitalized for smoke inhalation, police say.

"There were two sisters from the fire building that were inside the building when it exploded and our units saw them laying on the ground outside and working in conjunction with our EMS units we took those people and we got them to a hospital quickly," said FDNY Chief of Operations John Hodgens at a press conference held on Tiffany & Fox Streets in the Bronx, near the scene of the fire. "Unfortunately, one of them has succumbed to the injuries and has passed away."

The NYPD said five police officers were also being treated for smoke inhalation at Lincoln Hospital and were listed in stable condition.

The explosion and fire destroyed three buildings, according to Hodgens. Two other buildings sustained structural damage but can be saved, he added.

Con Edison and the city Department of Buildings responded to the scene.

Currently at the scene of a massive fire due to a gas explosion in my district. All emergency first responders are on the scene and currently battling the fire.

I will continue to remain on site with my team as long as it takes to get answers and ensure the community’s safety pic.twitter.com/S2uwyqWdOl

Gas has been turned off for 18 residential customers along the block to make it safe for FDNY first responders, according to Con Edison.

The mayor said prior to the explosion there was a report of a gas odor, but that officials have not yet determined what caused the blast.

"We want to get the gas back on as quickly as possible because we have a lot of seniors that live on this block," said Mayor Eric Adams. "These are small homeowners and it's really the bedrock of this community."

He said the goal is to conduct a safe but expeditious investigation to get people back into their homes as quickly as possible.

Residents displaced by the fire will be able to stay in area hotels, according to officials.

The American Red Cross is also on scene to help get residents food, water and other necessities.

Firefighters will have to navigate through large amounts of debris to uncover the cause of the fire in the ongoing investigation.

The fire happened a little more than a week after the Twin Parks North West apartment building fire nearby in the Bronx, in which 17 people died, including eight children.

"This tragic and frightening event after the inferno we saw just days ago just really add pressure on the Bronx and all those who have been experiencing and overcoming this issue as it seems to continue to unfold right now," said Mayor Adams.