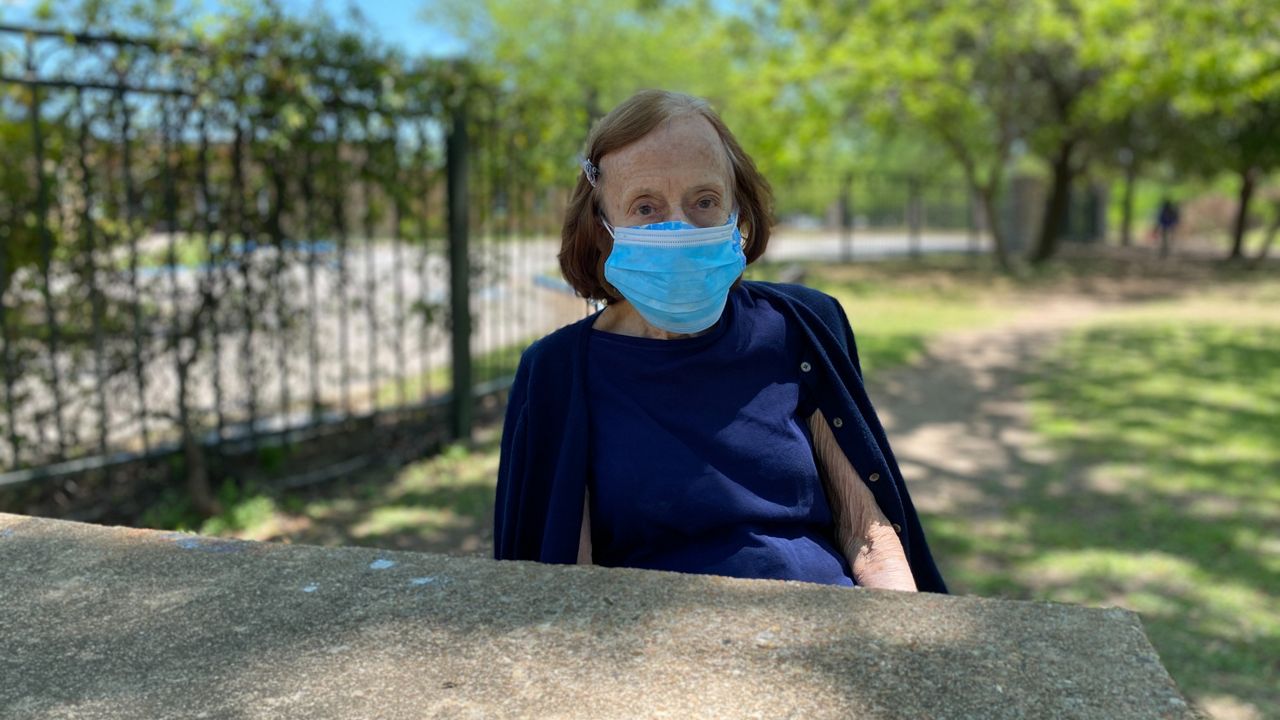 A woman who wishes to be identified as Patricia and recently received COVID-19 vaccination with the aid of Austin Vaccine Angels appears in this image from April 2021. (Spectrum News 1/Niki Griswold)

But in the first months of the vaccine rollout, with demand so high and supply limited, doses were hard to come by, even for people in priority categories.

One retired senior in Austin says she faced multiple difficulties while trying to get access to the vaccine, despite her age putting her in one of the top priority groups.

Though she's done her best to stay occupied during the past year of strict isolation, she says the barriers to getting a vaccine appointment were frustrating and demoralizing, until a volunteer group stepped in to help.

“I can't even think of a life without art," said Patricia, who wished to only be identified by first name. “I have many many interests many projects, and one never seems to come to the end of them.”

“We're gregarious human beings, we like to interact with each other," said Patricia. "We try to stay in touch over the phone or in other ways, but it's, it's, you miss it very much. Yes, I miss it.”

When the vaccine rollout started, she did her best to book an appointment.

“It was difficult," said Patricia. "I signed up to different websites, I called pharmacies, and it didn't seem like it was going to happen very soon.”

Jodi Holzband was in group 1B and also struggled to get an appointment.

Once she got the vaccine back in February, she put out an offer to help others, especially seniors, get theirs as well.

“The response was huge and so all of a sudden I was like OK, I need to recruit volunteers to help with this," Holzband said.  ​

She started Austin Vaccine Angels, an entirely volunteer-run group that books appointments for people struggling to get access to the vaccine.

So far, they’ve helped more than 4,000 people get vaccinated, including Patricia.

“I was very touched by the way they treated each person as an individual and didn’t just refer them to a cookie cutter program," said Patricia.

The group focuses on being as accessible as possible, offering Spanish speaking volunteers, neighborhood-specific appointments, and even vaccinated drivers to take people like Patricia who aren’t able to drive to their appointment.

“I wanted to make sure that there was some equity there, that people who were older or in underrepresented communities that weren't getting vaccines at the same rate as other people [were provided with access]. That was the goal and we did very targeted outreach," said Holzband.

Patricia says their personalized approach meant the world to her.

“This was a kind of a joyous and encouraging feeling, and it was even more once I had the vaccine. I felt so liberated," she said.

Now, with the opportunity to travel and see her loved ones nearly within reach, she says, “I feel so encouraged to be able to take the next step, and look at the time when we can eject ourselves from this isolated strange time."

With hope and optimism on her mind, she’s also holding gratitude for the Austin Vaccine Angels close to her heart.

“I hope that they will be recognized for their very unusual generous spirit. It should be something to emulate," said Patricia.