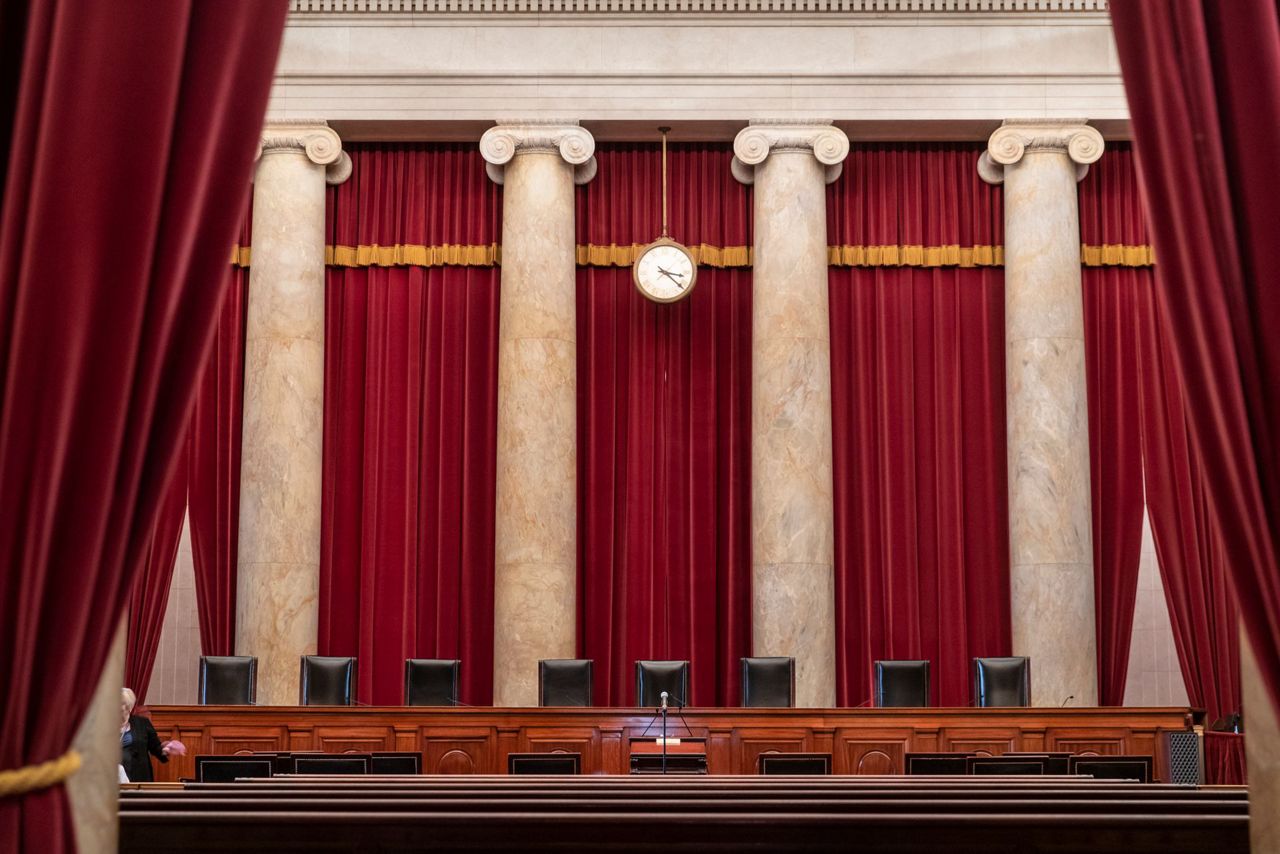 WASHINGTON (AP) — The Latest on Supreme Court nominee Brett Kavanaugh and Christine Blasey Ford, who accuses him of sexually assaulting her decades ago (all times local):

The top Democrat on the Senate Judiciary Committee is seeking "immediate postponement" of any further action on Brett Kavanaugh's nomination to the Supreme Court amid a new report of alleged sexual misconduct.

Sen. Dianne Feinstein of California sent a letter late Sunday to GOP Chairman Chuck Grassley after The New Yorker magazine reported that Senate Democrats are investigating a second woman's accusation of sexual misconduct by the nominee when he was a Yale freshman.

The panel has set a Thursday hearing with Kavanaugh and Christine Blasey Ford, who earlier accused him of sexual assault when they were teens.

Feinstein also asked Grassley to have the FBI investigate both allegations.

In a story Sunday, The New Yorker says Deborah Ramirez recalled Kavanaugh exposing himself at a drunken dormitory party.

The Senate Judiciary Committee has made public the letter in which Christine Blasey Ford alleges sexual assault by Supreme Court nominee Brett Kavanaugh.

In the letter to Sen. Dianne Feinstein of California, dated July 30, Ford recalls a party in the early 1980s where she says a drunken Kavanaugh pushed her on a bed, stifled her screams and tried to undress her before she escaped. Kavanaugh denies the allegation.

Ford also claims that Kavanaugh's friend Mark Judge was in the room during the alleged attack.

A lawyer for Judge told the committee he has "no memory of the alleged incident" and has never seen Kavanaugh act the way Ford describes.

Ford and Kavanaugh are slated to testify Thursday before the Judiciary panel. Ford also wants Judge to testify, but Republicans have rejected that request.

The White House released a statement from the nominee Sunday after the allegations in a New Yorker article in which a woman, Deborah Rodriguez, a former Yale classmate, alleged he exposed himself and thrust his penis in her face during a drunken dormitory party.

Kavanaugh says the event "did not happen" and that the allegation is "a smear, plain and simple."

A White House spokeswoman adds in a second statement that the allegation is "designed to tear down a good man."

Kavanaugh is slated to testify Thursday about the first allegation of sexual assault, dating back from a high school party more than 35 years ago. His accuser, Christine Blasey Ford, is also set to testify.

The New Yorker magazine is reporting that Senate Democrats are investigating a second woman's accusation of sexual misconduct by Supreme Court nominee Brett Kavanaugh from his teenage years.

In a story posted Sunday night on its website, The New Yorker reports that the claim dates to the 1983-84 academic year, Kavanaugh's freshman year at Yale University.

The New Yorker identifies the woman as 53-year-old Deborah Ramirez. The magazine says she described the incident in an interview after being contacted by the magazine.

The magazine says Ramirez remembers that Kavanaugh exposed himself at a drunken dormitory party, thrust his penis in her face, and caused her to touch it without her consent as she pushed him away.

In a statement provided by the White House, Kavanaugh denies the event ever happened.

After days of negotiations, the Senate Judiciary Committee has scheduled a hearing Thursday for Supreme Court nominee Brett Kavanaugh and a woman, Christine Blasey Ford, who says he sexually assaulted her as a teenager.

The two have agreed to a date and time after nearly a week of uncertainty over whether Ford would appear at all. The agreement sets the stage for a dramatic showdown as Kavanaugh and Ford each tell their side of the story.

The hearing will also determine the fate of Kavanaugh's confirmation, which hangs on the votes of a handful of senators. It had seemed assured before the 51-year-old California college professor went public a week ago with her allegation that Kavanaugh assaulted her at a party when they were in high school.

Trump and Senate Republicans have repeatedly said an investigation is not necessary. Senate Democratic leader Chuck Schumer and the top Democrat on the Senate Judiciary Committee, California Sen. Dianne Feinstein, sent a letter to Trump on Sunday saying the FBI has more than enough time before Ford and Kavanaugh testify on Thursday.

Schumer and Feinstein write that Trump's comments this past week about getting to the bottom of the charges is "is merely lip service unless you are willing to direct the FBI to investigate."

Senate Judiciary Committee staff have written lawyers for Supreme Court nominee Brett Kavanaugh's accuser, Christine Blasey Ford, and said they would do everything they could to "provide a safe, comfortable, and dignified forum" for her testimony Thursday. But they also say the committee will decide who testifies, in what order and how they will be questioned.

In an email exchange between the committee and Ford's lawyers obtained by The Associated Press, a counsel for Senate Judiciary Chairman Chuck Grassley wrote that the terms over which witnesses to call and questioning are "non-negotiable." Ford's lawyers asked for several conditions surrounding her testimony.

Davis wrote that they would hold the hearing in the Judiciary panel's regular hearing room, which is small. He said that was to avoid a "circus" atmosphere.

A spokesman for the chairman of the Senate Judiciary Committee is confirming that the committee will hold a public hearing Thursday on the sexual assault allegation that's been made against Supreme Court nominee Brett Kavanaugh.

That word comes from Taylor Foy, an aide to Republican Sen. Chuck Grassley of Iowa, soon after lawyers for Kavanaugh accuser Christine Blasey Ford said in a statement that they were "committed to moving forward with an open hearing" on that day.

The Ford lawyers' statement also said further details about the upcoming hearing are still to be worked out.

At issue is Ford's accusation stemming from an incident she says took place when she and Kavanaugh were teenagers.

Attorneys for Brett Kavanaugh's accuser, Christine Blasey Ford, are citing "important progress" on a high-stakes public hearing to air out her decades-old sexual assault claim against the Supreme Court nominee.

Her attorneys say they have committed to a 10 a.m. hearing on Thursday and accept the committee's decision not to subpoena Mark Judge, a Kavanaugh friend who Ford asserts was present when the incident occurred.

But they say the Republican-controlled Senate panel hasn't said who will be asking questions of her and Kavanaugh. The Senate Judiciary Committee's 11 Republicans — all men — have been seeking an outside female attorney to interrogate Ford.

Ford's attorneys say the committee has not indicated when they will respond, but said the remaining "procedural and logistical issues" will "not impede the hearing taking place."

Sen. Lindsey Graham says Brett Kavanaugh's accuser will be treated "respectfully" by the Senate Judiciary Committee, but both witnesses "will be challenged" over the sexual assault allegation from decades ago she's made against the Supreme Court nominee.

Talks continue between the GOP-run committee and Christine Blasey Ford's lawyer over details of a tentative agreement for a hearing Thursday.

Graham says Ford's lawyers are contesting two conditions for her testimony — that Ford and Kavanaugh will be the only witnesses and that an independent counsel will ask the questions.

The South Carolina Republican tells "Fox News Sunday" that "I hope she comes. I will listen if she does."

But he adds that "unless there's something more" to back up her accusation, he's "not going to ruin Judge Kavanaugh's life over this."

A Democrat on the Senate Judiciary Committee says Brett Kavanaugh's accuser deserves a fair hearing to determine whether her allegations of sexual assault are "serious" enough to vote down his Supreme Court nomination.

Sen. Dick Durbin, the No. 2 Democrat in the Senate, acknowledged that lawmakers will "probably not" be able to know the truth of Christine Blasey Ford's decades-old allegation that Kavanaugh assaulted her at a house party when they were teenagers.

Durbin indicated that Democrats are likely to ask about Kavanaugh's drinking history because Ford has alleged Kavanaugh was "stumbling drunk" when it happened.

Durbin told ABC's "This Week" that some Republicans "reached out to Democratic senators and assured them that they are looking to this as kind of a determination as to how their final vote" on Kavanaugh is cast.

Talks are set to continue on tentative agreement for a Thursday hearing for Brett Kavanaugh's accuser to tell the Senate Judiciary Committee about her allegation that the Supreme Court nominee sexually assaulted her decades ago.

Lawyers for Christine Blasey Ford and representatives of the committee came to the tentative agreement late Saturday. Kavanaugh also is set to appear at the hearing.

Some details, such as the order of their testimony, are being negotiated, and talks are expected to continue Sunday.

Copyright 2018 The Associated Press. All rights reserved. This material may not be published, broadcast, rewritten or redistributed.