Typically, forecasters are warning others about the dangers of flooding during a storm. When Ida hit New York City, this forecaster had to respond to flooding in his own home.

The rain outside my home was coming down harder than I've ever seen it.

First, the front lawn turned into a lake. Next, the street turned to a river.

As the downpours continued, I went back and forth from looking at the weather radar to looking out the front door and then to looking in my basement.

Over 30 years, my home had only had flooding from storms twice. The first was a result of Tropical Storm Floyd, the other from severe storms.

Would my basement stay dry this time? 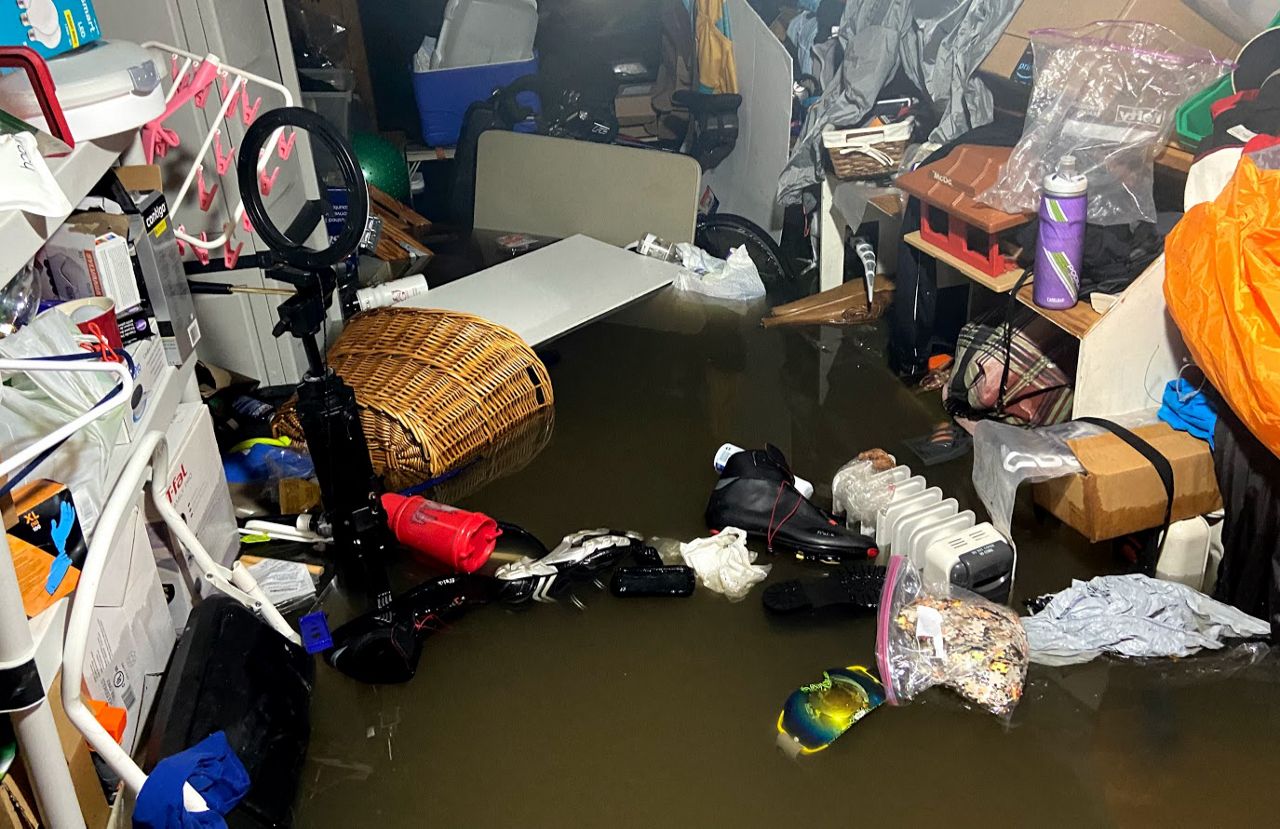 My phone was getting alert after alert. It sounded like a car alarm going off.

Tropical moisture had super-charged severe thunderstorms in a scenario that my area had not seen in my 28 years as a professional meteorologist.

As the water in the street spilled over into my front yard, I figured it was a matter of time before my basement filled with water. I wondered how bad it would be. 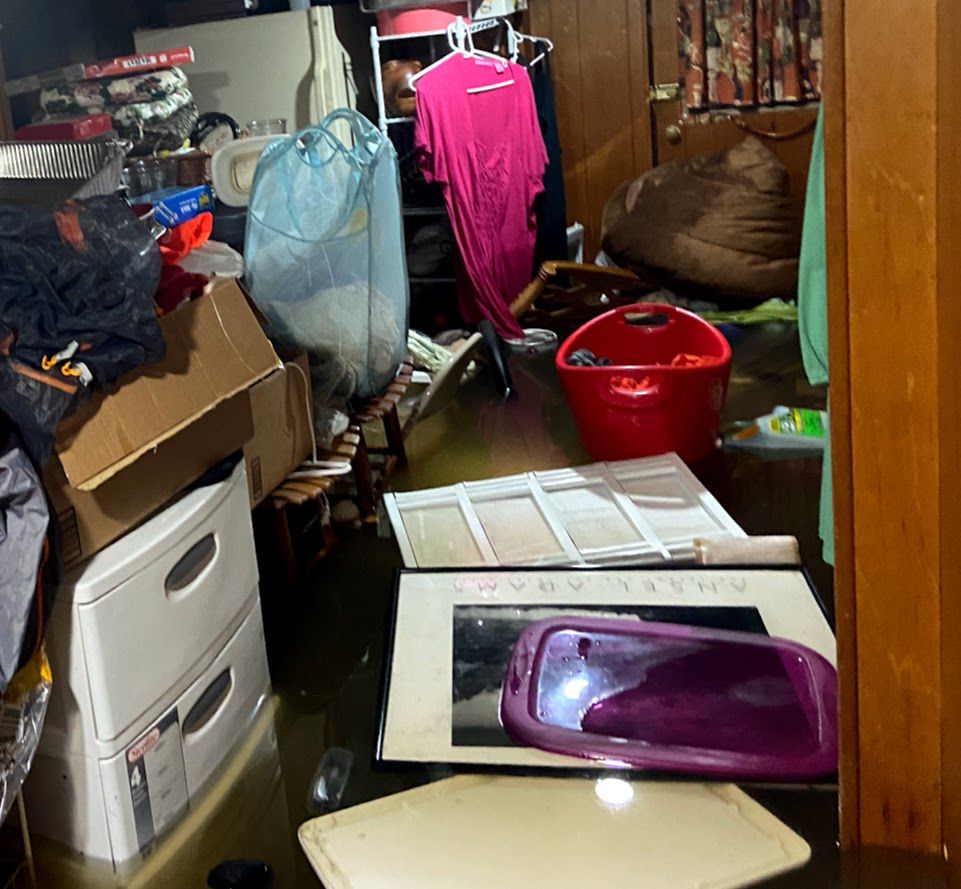 "Dad, the water is coming up!" My teenager was yelling up from the basement.

The flooding had begun. I turned on the shop vac and started to try and vacuum the rising water. I quickly realized that I wouldn't be able to keep up.

The water was pouring up and out of the sewer drain because the heavy rains were just too much for our local sewers. I abandoned the shop vac and started grabbing any electronics that were down low in the basement. 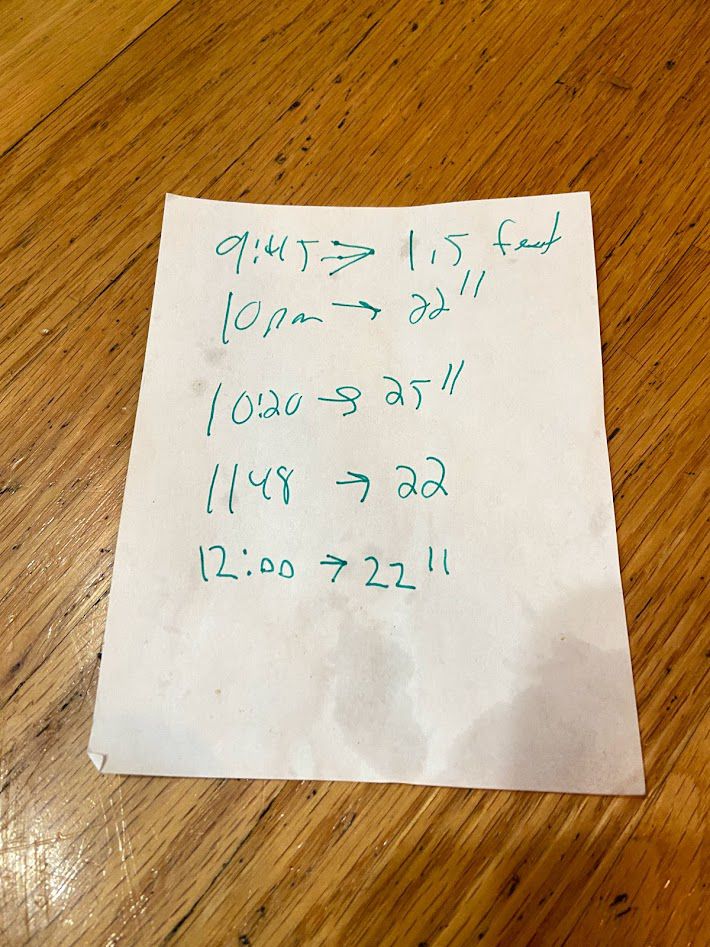 A written log of the flooding as it happened. (John Davitt)

Within 15 minutes, there was a foot of water in my basement.

As the water covered the outlets, I knew it was too dangerous to wade back into the flood.

We expected to lose power and began scrambling to find flashlights. As the storms continued, the station was calling. I was off tonight, having returned home earlier in the day from a week-long vacation. They wanted me to do a live phone interview about the storms to help give the meteorologist on duty that night a brief break.

Over the course of the next hour, I did several phone updates live for the station.

In between the reports, I was measuring the rising water in my basement with a tape measure. I kept a log of the water height.

We saw a maximum of 25 inches of water in the basement, including a rise of more than a half-foot in about a half-hour. By midnight, the rain had eased and it was time to see the damage. 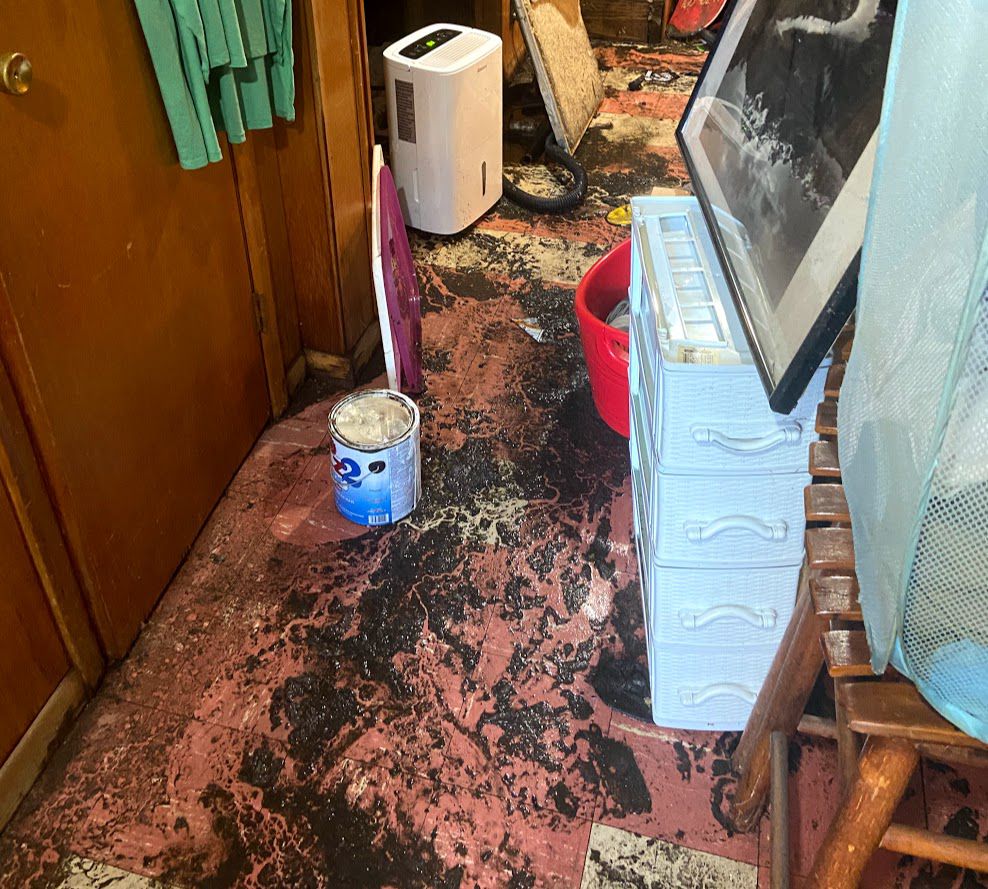 As the rain stopped and the volume of water in our local sewers eased, the water in my basement drained back into our main drain.

When the water was gone, we were left with puddles of water in low spots and lots of dirt and mud. This had come from the sewer and we considered it contaminated waste.

In addition to the dirt and water, our water heater pilot was out and our furnace wasn't working. This meant cold showers and no central air to cool the home were in our forecast. 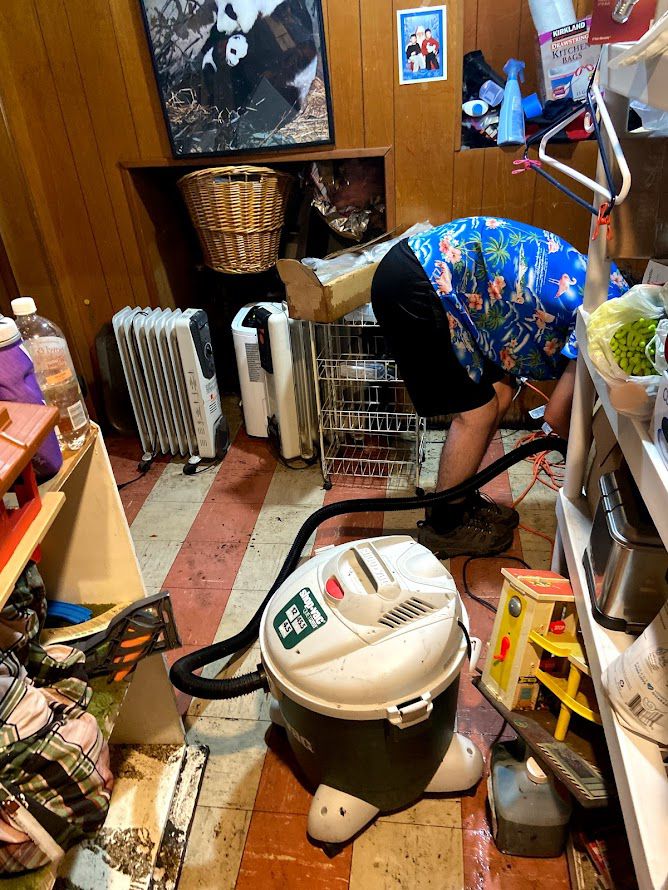 Our strategy for cleaning was to remove all the items from the basement that were touching the floor. We put them in the backyard.

Next we vacuumed up the "dirt" and then mopped the floor with a combination of water and bleach. The bleach would kill any bacteria and prevent mold.

We took pictures of the damage in case we'd be able to make an insurance claim. Most flooding from storms is not covered by homeowners insurance.

Our basement had concrete walls, so we were able to wipe them down to clean up.

In nearby homes that had drywall, they had to cut out the lower third of their walls that had sustained water damage. This was to avoid the growth of mold. 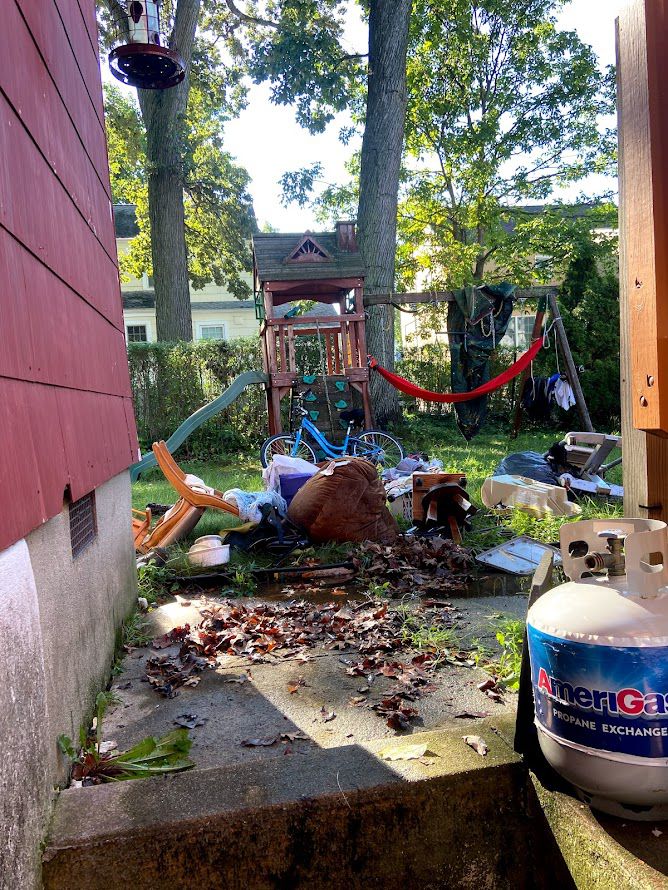 As we sorted through our items that flooded, we threw away nearly everything, including clothing, stuffed animals and shoes. We did save items like dishes and silverware that could be sanitized.

After two days of working for a few hours at a time, we made a lot of progress. We had a line of trash bags in front of our home, as did our neighbors. This was a testament to the damage from Ida's remnants.

On the bright side, after repeated tries, we were able to relight our water heater. Hot showers were back and needed after days of cleaning! 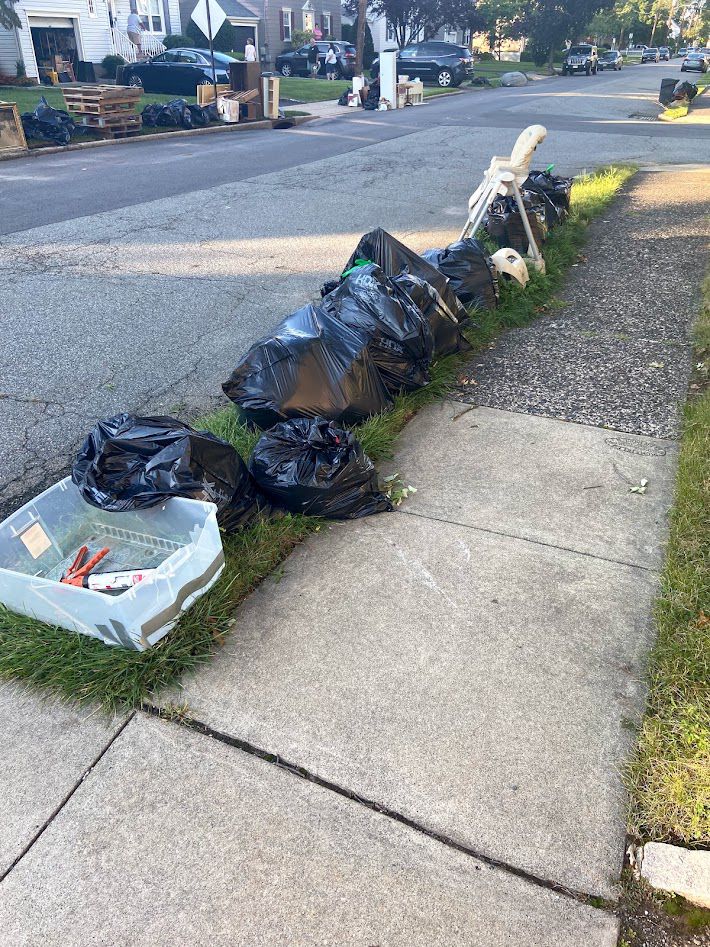 Streets lined with debris and trash after the flooding. (John Davitt)

Hopefully, you won't need to ever clean up after a flood. But if you do, here are some do's and don'ts from the Red Cross.