You're living on a heat island

Usually, islands are associated with tropical settings and cool ocean breezes. Urban heat islands are just the opposite.

A new study by Climate Central ranked urban heat islands and New York City was the third-hottest in the nation. New Orleans was number one on the list and Newark, just across the Hudson River, came in second. The study showed that, on average, New York City was nearly eight degrees warmer than areas nearby that didn't have as many buildings and roads. 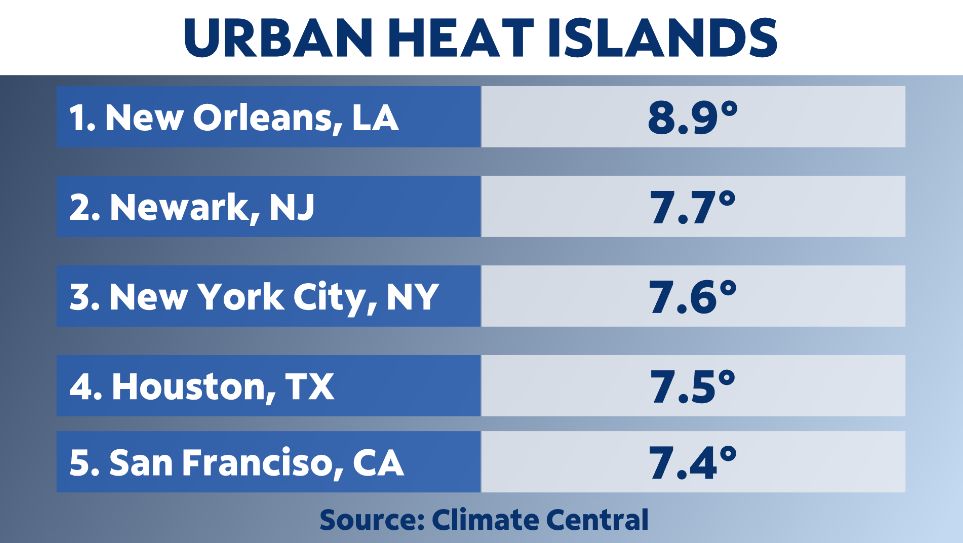 Urban heat islands are areas where temperatures are significantly hotter than areas surrounding it. Cities retain more heat due to the lack of vegetation and an abundance of roads, buildings and sidewalks.

The building materials that make up a city have a low albedo. That means that cities absorb heat instead of reflect it. It's similar to wearing dark clothing on a sunny, hot day. The dark colors enhance the heat from the sun. The streets and roofs do the same thing and make summer heat even worse. 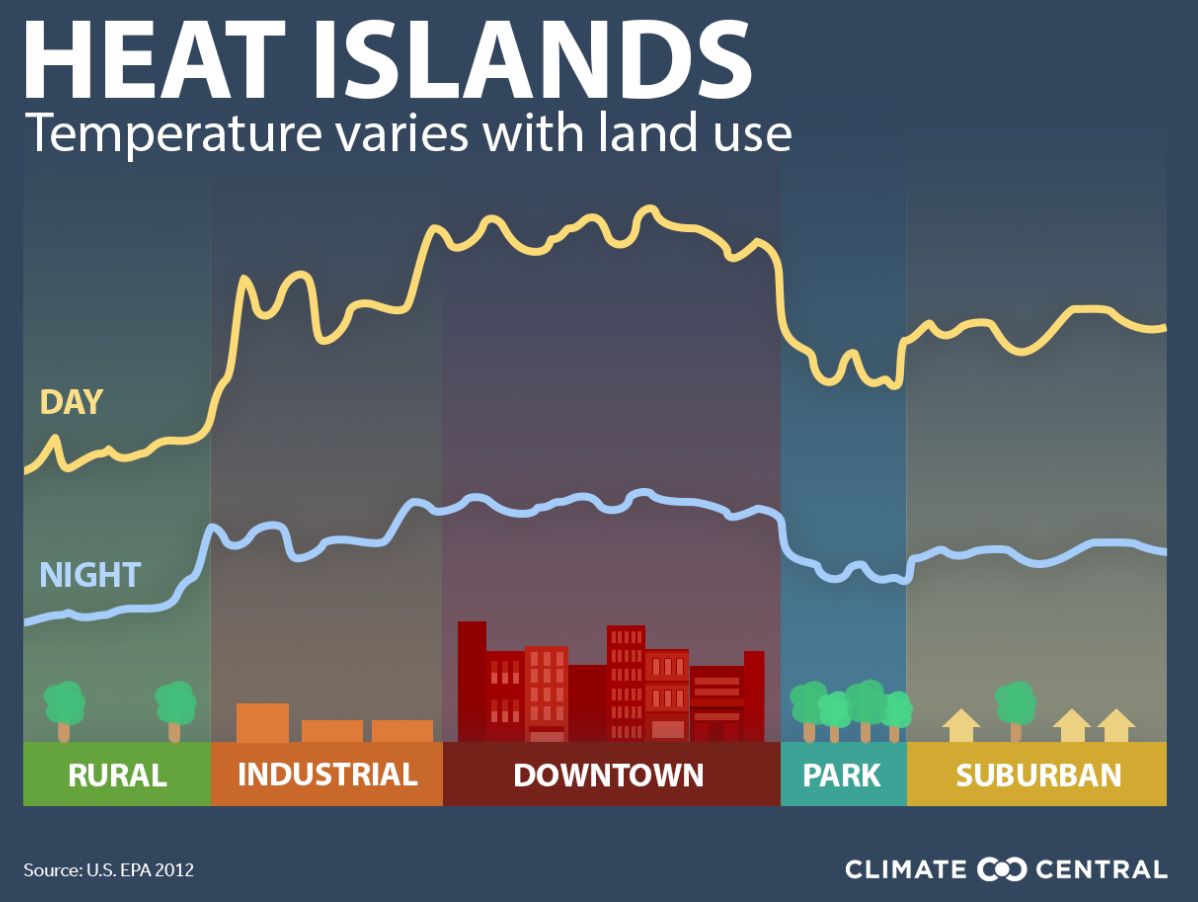 In New York City, it's not just the miles and miles of roads; it's also the height of the buildings that make us a heat island. The Climate Central study noted that an abundance of tall buildings can trap heat. The skyscrapers block the wind and this allows heat to build more than it would in an open area.

New York City has more than 6,000 high-rise buildings and 274 skyscrapers. These are buildings that are 500 feet or taller. Other key factors in pushing the Big Apple to the number 3 spot on the list were population density and green space. 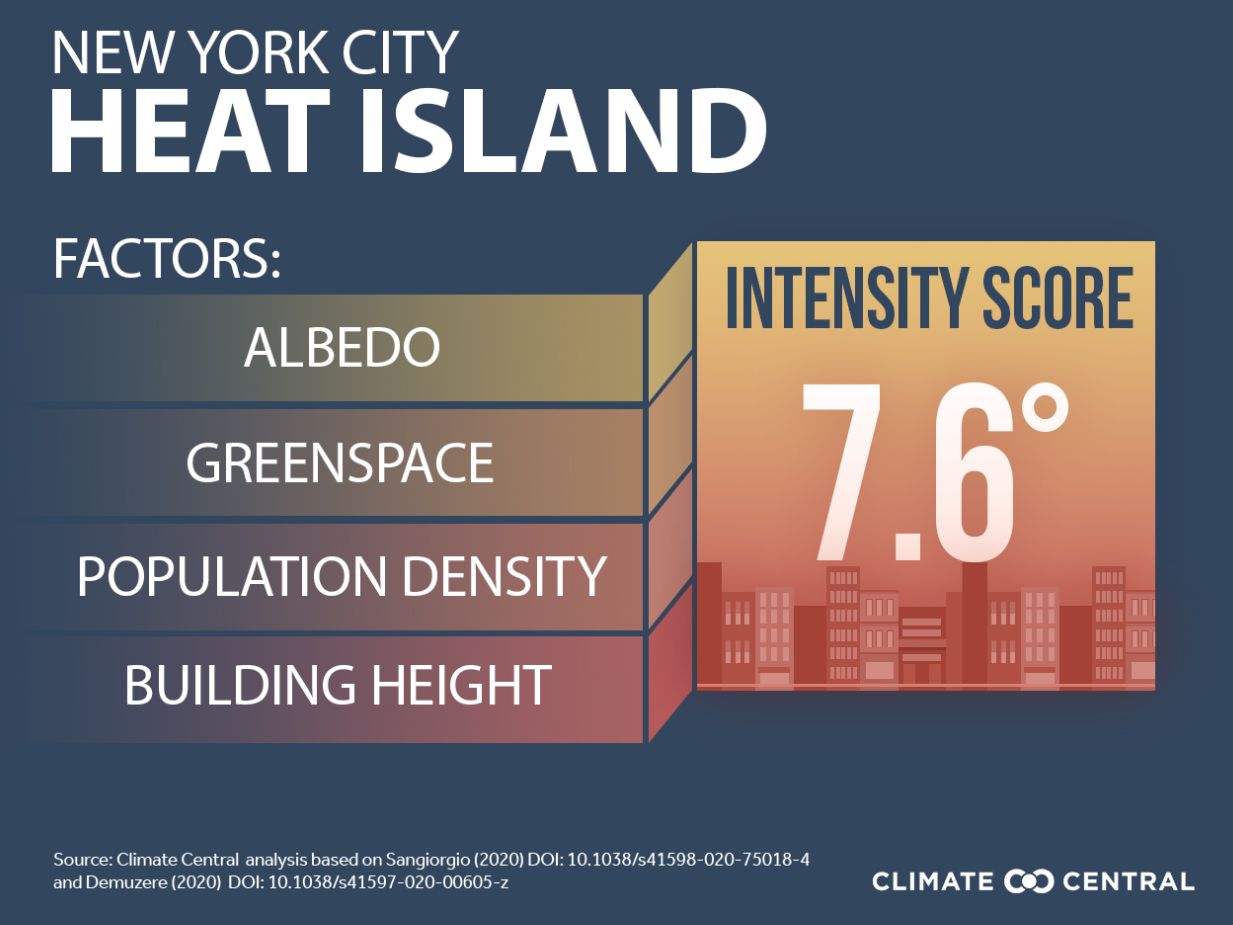 How to make a difference

There are ways to reduce the urban heat island effect. The first is roofs on buildings. Using a white-colored roof instead of dark-colored roof helps reflect sunlight. Also, some newer buildings have green roofs, where there is a layer of dirt, grass and even trees. Making new parks and green spaces, along with planting more trees, will have an impact.

So, we may live on a heat island, but it sure won't provide relief from the sizzling temperatures of summer.