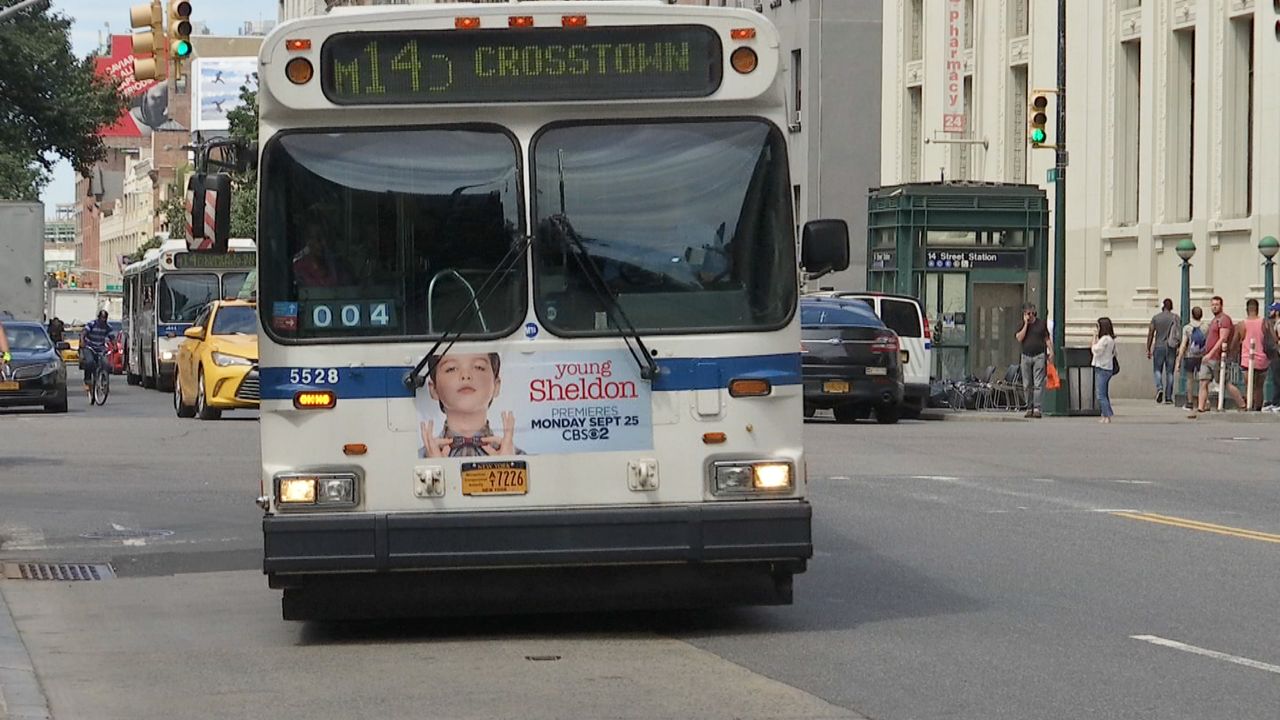 A file image of an M14 bus traveling down 14th Street in Manhattan.

A judge on Friday afternoon put the brakes on New York City's plan to ban almost all cars on a portion of 14th Street in Manhattan after a last-minute appeal, the city transportation department confirmed.

The judge granted the appeal, which was filed at the state appellate court division. The transportation department will suspend its plans, regroup, and likely attempt to appeal the latest decision.

Here's the specific appeal from community groups opposed to the 14th St. busway

- did judge err in finding city took "hard look," even if there was no public comment or environmental study

- is the 6am-10pm enforcement "arbitrary and capricious" without a study pic.twitter.com/pOgtNjqagf

The 18-month pilot project to allow only buses and trucks on 14th Street — between Third and Ninth Avenues in an effort to speed up bus commutes and ease congestion — was set to start 6 a.m. Monday, and came just three days after a judge lifted an injunction against the plan.

The plan would allow cars to make pick-ups and drop offs on 14th Street, but they would have to make a right at the next intersection and would not be allowed to make left turns. The restrictions were planned to be in place every day, from 6 a.m. to 10 p.m.

The plan has been in the works for two years, and was designed as a contingency plan for what was supposed to be a complete shutdown of L train service in Manhattan for repair work related to Hurricane Sandy damage.

However, the L train repair work plan was altered earlier this year to allow for limited service, rather than a complete shutdown. That led opponents to question whether the plan to restrict cars on 14th Street was still necessary.

A judge initially issued a temporary injunction to halt the plan on June 29, just two days before it was scheduled to go into effect. That injunction was the one lifted on Tuesday, when a judge ruled that the city's Department of Transportation does have the authority to make changes to 14th Street.

The plan sparked considerable confusion and concern, especially among residential and community groups that feared a traffic spillover onto neighboring streets.

"For those who think that this is just selfish neighbors, we live here, we breathe the air, our buildings rattle and vibrate and we have to deal with horns and honking," said Arthur Schwartz, an attorney for the plaintiffs. "We deserve consideration as well."

Mayor Bill de Blasio vowed to continue to fight to enact the plan.

This surprise eleventh-hour decision, forced by a few, means that come Monday, thousands of New Yorkers won’t get the faster and more reliable buses on 14th St. they were expecting.

We’ll fight to get this done for bus riders.https://t.co/1jMwr7pE0b

TLC Votes to Extend Cap on Ride-Hailing App Vehicles, How Long They Can Cruise Without Passengers

Times Square Shuttle to Get Upgrade After a Century of Service

E-Bikes and E-Scooters Will Likely be Regulated

MTA Approves Reorganization Plan That Could Cut Thousands of Jobs