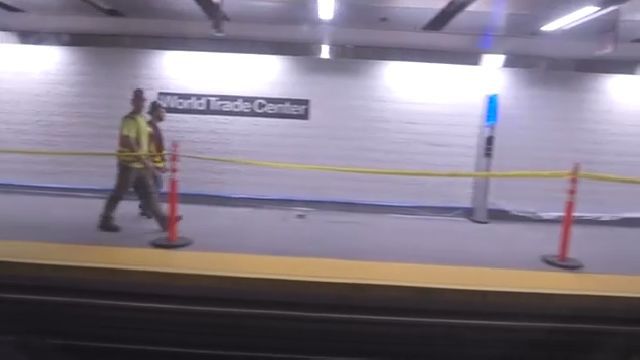 The Cortlandt Street stop in Lower Manhattan has long been a ghost station, for years barely visible from trains rushing past it on the 1 line.

"I remember before 9/11, it was like a tannish subway tile station," one commuter said.

On September 11th, debris from the collapsing World Trade Center crashed through the ceiling, destroying the station.

As much of the World Trade Center site was rebuilt, the station remained unusable, although trains began reusing its tracks a little more than a year after the attacks.

Now, after a $180 million reconstruction, sources say the station will reopen at 12 p.m. Saturday — three days before another 9/11 anniversary.

"It never, in a million years, would it occur to me that it would take 17 years to fix that station," another commuter said.

MTA officials have said that's because the rest of the site needed to be rebuilt first.

Once it returns to service, the station will have four entrances into the World Trade Center transportation hub and will be accessible to riders with disabilities.

The reopening of the station will link the 1 train to 11 other subway lines in Lower Manhattan, as well as the PATH train.

Riders who will commute to and from the station say they welcome its long-overdue return.

"Now, it's more convenient because I work right outside. It's only a few steps from my job," another commuter said. "Three blocks versus a few steps."

Although it's taken a lot more than a few steps to bring the Cortlandt Street station back.