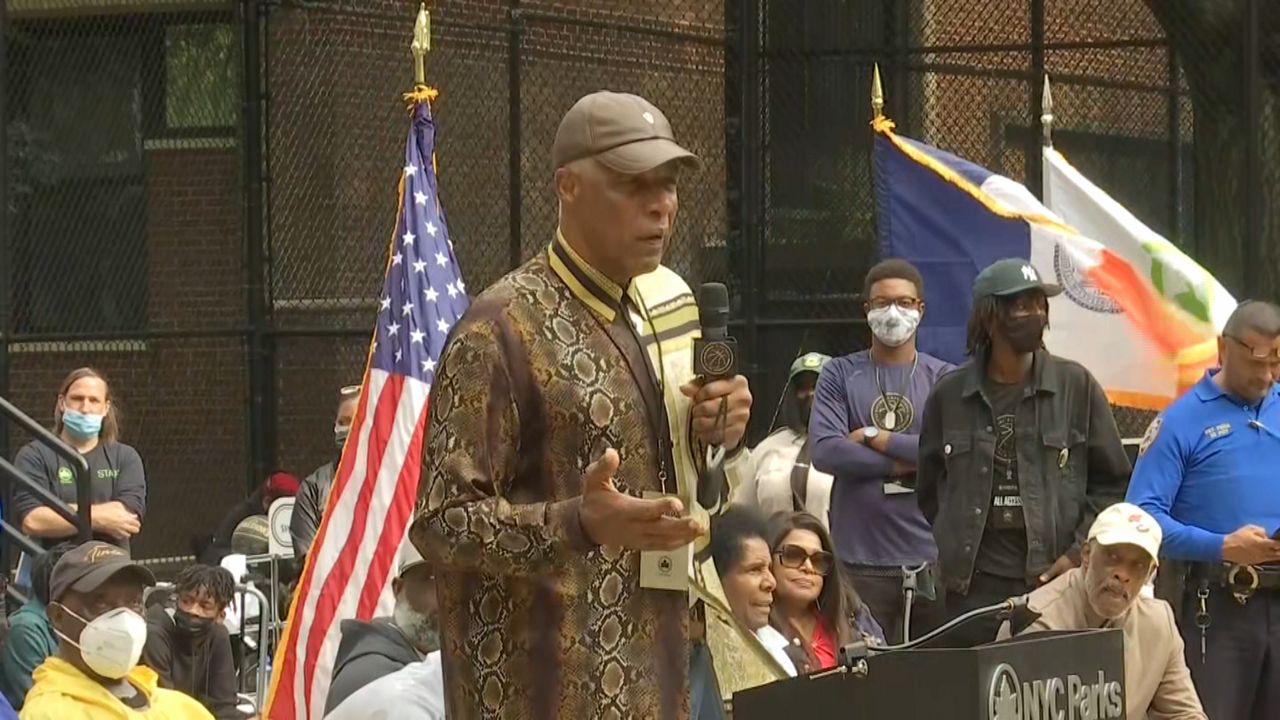 Julius "Dr. J" Erving was among several basketball legends who turned out Oct. 9, 2021, for the ribbon cutting and reopening of the newly renovated Greg Marius Court at Holcombe Rucker Park in Harlem.

NEW YORK — Julius "Dr. J" Erving was among several basketball legends who turned out Saturday afternoon for the ribbon cutting and reopening of the newly renovated Greg Marius Court at Holcombe Rucker Park in Harlem.

The legendary Dr. J makes an appearance at the legendary #RuckerPark in #Harlem #NYC as the NBA Players Assoc salutes the basketball legends and the history of the park. #JuliusIrving pic.twitter.com/dRCWev5pAb

The NBA Players Association teamed up with the city parks department for the renovation. The court's pavement was leveled and repainted, the baskets were replaced, the bleachers redone and a new state-of-the-art scoreboard installed.

The court also has a brand new mural provided by rapper and Harlem native A$AP Ferg.

Erving says the park was where a lot of the style of today's NBA was born.

"I don't remember whether we won most of our games or not, but it suddenly became as much about putting on a show as it was winning the game," Erving recalled.

"I think it's a great tribute to the people who come to support the game of basketball,” fellow Hall-of-Famer Nate "Tiny" Archibald said. “You talk about the legends, past and also present, to come here. This is probably the most historical park in the world."

For decades, professional players would compete with amateurs in tournaments at the park.  And there were plenty of celebrity games, known as the Entertainers Classic.

"Summertime ain't summertime without Rucker Park. It has been an honor for me to coach here,” rapper Fat Joe said. “Eight years, I won seven championships.”

Many street legends also showcased their skills at Rucker, making names for themselves.

Teen players nowadays use the court as an inspiration to improve their games.