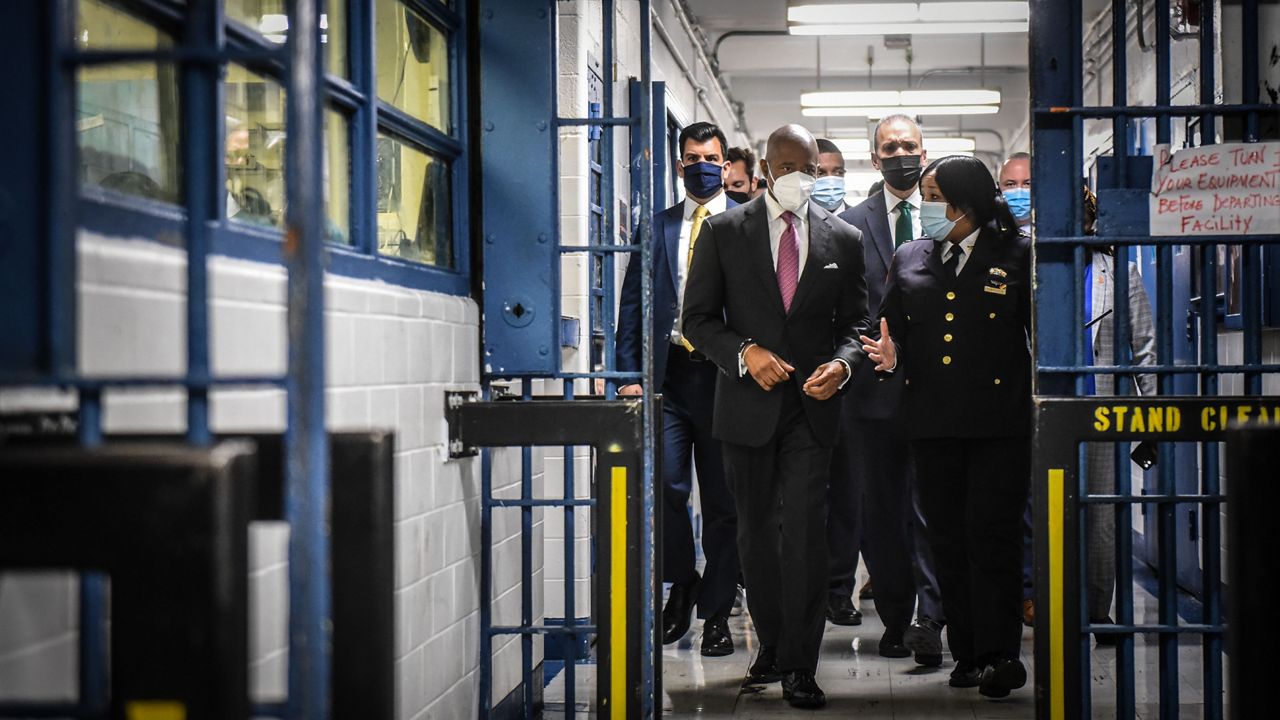 In about five years, smaller jails in four boroughs are supposed to replace Rikers Island after it shuts down.

But on Monday, Mayor Eric Adams questioned whether the city would need more space thanks to an increasing jail population.

“We have to have a plan B, because those that have created a plan A that I have inherited obviously did not think about a plan B,” the mayor said at an unrelated press conference.

The mayor’s remarks came after the city comptroller, the public advocate and the chair of the City Council’s criminal justice committee made an unannounced visit to Rikers Island on Monday morning.

And surprisingly, after months of chaos, a staffing crisis and violence, these officials said the jail’s conditions appeared to be improving.

“I do want to say that it is demonstrably better than a year ago,” said Public Advocate Jumaane Williams.

That said, they reported some detainees were not receiving medication, and many officers were still working double shifts to make up for staffing shortages.

On top of that, the officials saw at least seven individuals in what the department is calling involuntary protective custody — where the city says some of the most violent inmates have been isolated.

Brad Lander, the city’s comptroller, questioned whether this unit violated a state law requiring several hours of out of cell time.

Adding on, it was the city comptroller who after their visit questioned whether the city would be able to meet its deadline to close the troubled jail complex.

“Staying on the path to close Rikers is critical, and I’m not confident that we’re on it,” Lander said. “Numbers were coming down and down over many years. They got as low as 4,000 during the pandemic. They’re back up to 5,700.”

The mayor did not offer many details about how he thinks the population could drop.

“What was the plan B that stated if we don’t drop down the prison population the way they thought we were, what do we do?” the mayor asked. “We have to look at everything from state facilities. We have to see if we can get help from the governor. We have to sit down with the chair of crime and correction. We have to see what’s available.”

As of July, the average daily population in city jails was 5,640. The Rikers closure plan set a goal of 3,300 detainees — far less than what’s there now.

So now the mayor says other facilities might be necessary.

“Keeping the city safe, everything must be on the table if it means using other facilities than we have to do that,” he said. “That is what we are looking at because someone has to think through a plan that I believe was put in place and we did not think through.”

When asked about how to address the increasing jail population (which is too large to meet the requirements of the borough based jail plan), the @NYCMayor said today “we need a plan b.” He then suggested sending some detainees to state facilities. pic.twitter.com/r65ZrV1U7Y