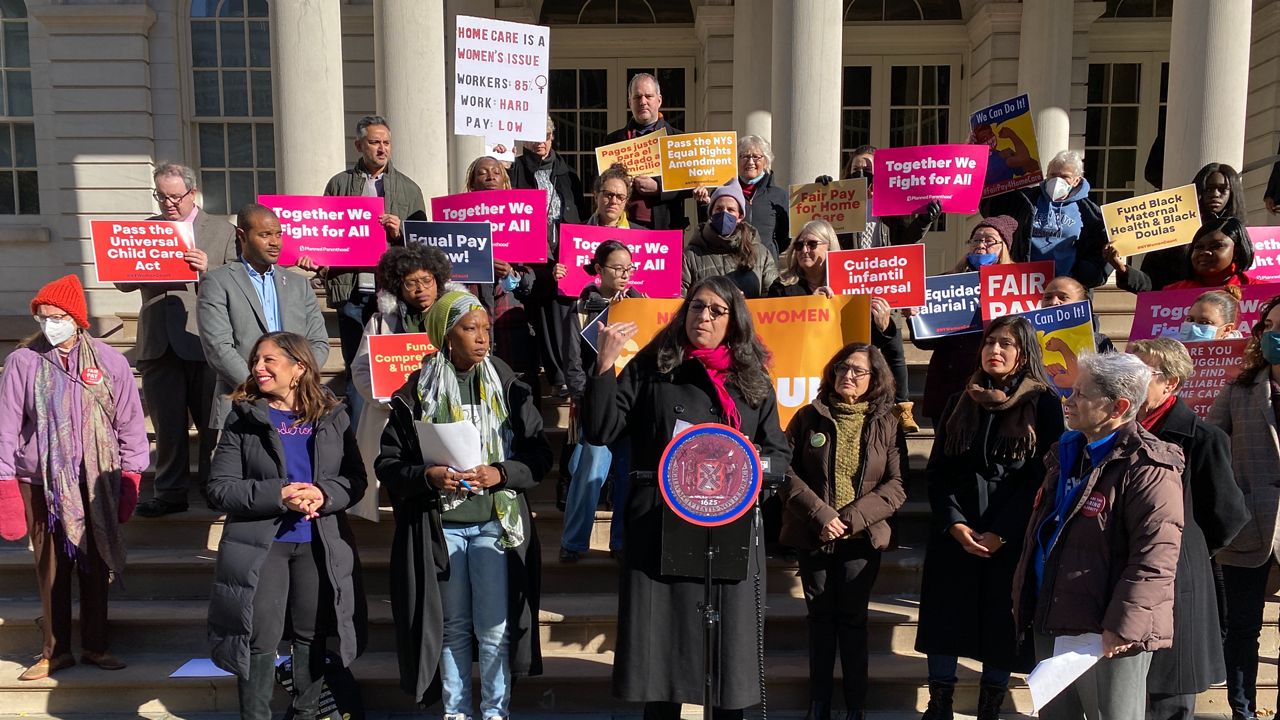 On the steps of New York City’s City Hall on Tuesday, a coalition of political, community and nonprofit women leaders called on Gov. Kathy Hochul to prioritize legislation they said is befitting of a history-making elected executive. (NY1/Philip O'Driscoll)

On the steps of New York City’s City Hall on Tuesday, a coalition of political, community and nonprofit women leaders called on Gov. Kathy Hochul to prioritize legislation they said is befitting of a history-making elected executive.

“Thanks to women across the state, Gov. Hochul just won her first full term,” Zakiyah Ansari of Alliance for Quality Education said to cheers.

Queens State Sen. Jessica Ramos said, “I, too, am here to celebrate the election of our first woman governor and support over very aggressively progressive economic women’s agenda here in New York.”

Among the group’s demands?

Participants at the rally cited how the unseen and unpaid labor of women sustains the state’s economy.

“And now that women have more power, it is time for us to realize the promise of New York,” said Assemblymember Deborah Glick. “Which is that those who are committed to childcare and raising children, who are helping our elderly at home, who are working hard in healthcare, are paid fairly, equitable.”

While the group urged Hochul’s commitment to specific state legislation, the governor this year has taken steps supportive of their broader stated goals..

They include raising home care worker wages by $3 an hour, creating a $35 million dollar fund to support abortion providers and $7 billion over four years to expand childcare access.

“A typical New York family has to spend 40% of their income on childcare for two kids,” Hochul had said in July. “How does that happen?”

Hochul spokesperson Avi Small added Tuesday: “As New York’s first female governor, Governor Hochul recognizes the importance of an economic agenda that lifts up women across the Empire State, and she will continue working with the legislature to build on the accomplishments of her tenure thus far.”

Some who attended the rally were insistent about the means of financing their priorities.

“Gov. Hochul, we must tax the rich by billions of dollars to invest into a bold economic agenda that uplifts working women next year,” said state Senator Jabari Brisport.