Voter information is displayed at Loaves and Fishes, a nonprofit facility for the homeless in Sacramento, Calif., on Thursday, Oct. 13, 2022. (AP Photo/Rich Pedroncelli)

People experiencing homelessness face many barriers when trying to participate in democracy. One of those challenges is simply voting.

Many who are homeless think they need a physical address in order to do so – but advocates say that's not true.

"You can register to vote without an actual address in all 50 states, but people don't know that. They don't know that if you live in a tent on Main Street, you can actually still register to vote," Kat Calvin, the founder and executive director of Spread the Vote, a nonprofit that focuses on increasing voter participation, told Spectrum News.

Calvin says that when someone who is unhoused is registering to vote, a local election office just needs "an address that gets you close to whatever your precinct is going to be."

"You can say, you know, the corner of Fifth and Main is where I spend most of my time," she said, adding: "Just being able to write some cross streets or some general directions will give them the information they need to give you a precinct, and that's really all they're looking for."

Indeed, a voter guide provided by the U.S. Interagency Council on Homelessness says that people who are experiencing homelessness should contact their local election office as a first step to ask what addresses they can use: "Most places let voters list a shelter, a street corner, or a park as their address."

When asked what someone who is unhoused would do if they still wanted to vote after being displaced, Calvin said the issue is probably moot: "Honestly, they're almost certainly not thinking about voting because they're trying to survive."

Calvin said she's had issues where the city “swept an encampment" and she could no longer find the people she worked with. "Often, many of them ended up dying," she added.

"If they did want to vote, they would need to go back to that neighborhood, "if they were assigned a polling place" visit the "county clerk" or go to a "library and check online to find out where they need to vote," she continued.

Calvin also suggested voting early, as many early voting polling places are not address-based. Not all states offer early voting; according to the National Conference of State Legislatures, 46 states, plus the District of Columbia, American Samoa, Guam, Puerto Rico and the Virgin Islands offer early in-person voting. 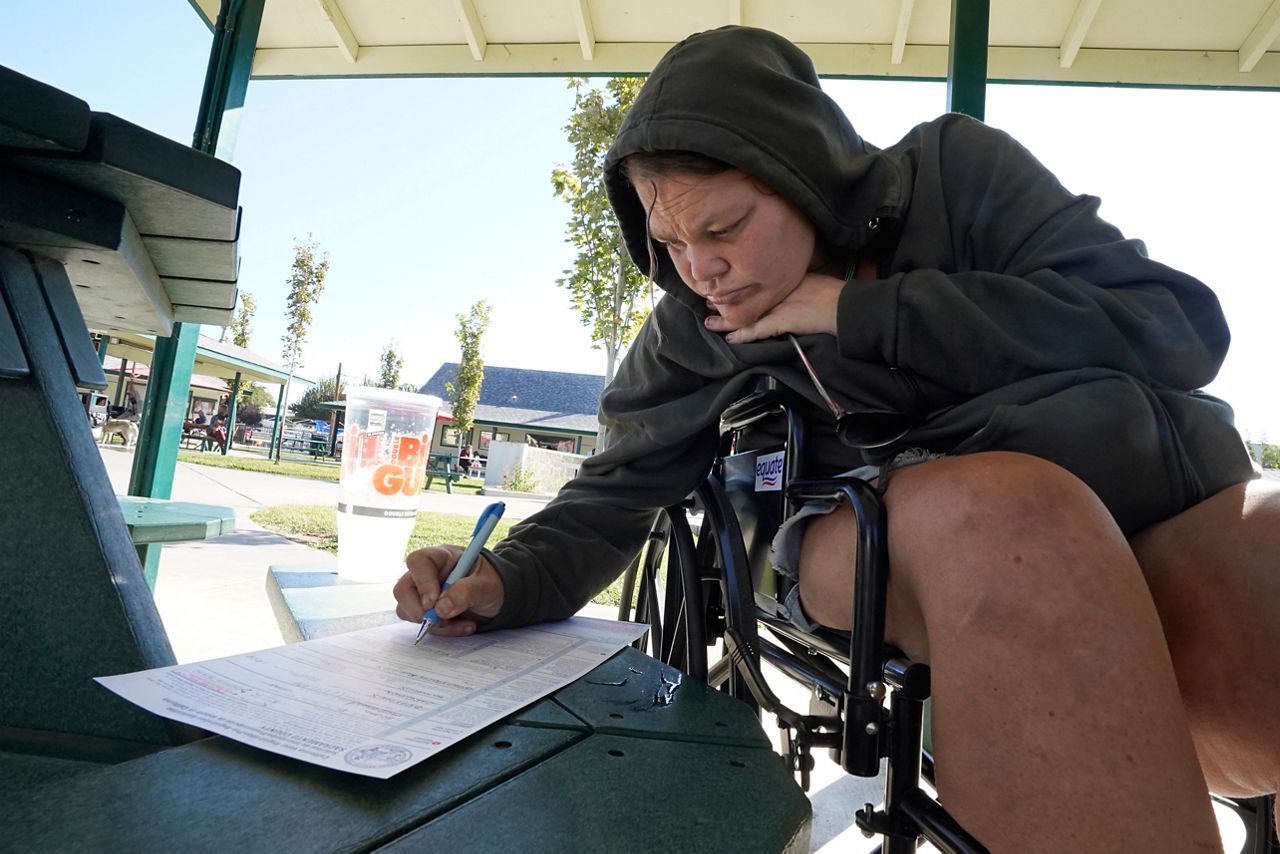 Elisha McDonald, who's been without a home since February, signs voter registration in Sacramento, Calif., on Thursday, Oct. 13, 2022. AP Photo/Rich Pedroncelli)

One advocate says that it's important for unhoused individuals to make their voices heard at the ballot box.

"Low-income folks who simply find their housing bills, their mortgage, their rent, more than they can afford, need to vote on those issues and need to think about those as central issues in helping everyone to pursue the American dream," Beth Shinn, a Human Organization Development professor at Vanderbilt University, told Spectrum News.

Shinn, who authored “In the Midst of Plenty: Homelessness and What to Do About It,” said that it's important for those who are experiencing homelessness to vote because issues affecting the unhoused population impact every American.

She says ending homelessness and making voting easier for the unhoused is "largely in the hands of policymakers."

"The closest thing we have to a silver bullet to end homelessness would be a massive expansion of the Housing Choice Voucher Program," Shinn said, arguing it makes housing affordable for poor people. The program caps rent payments to approximately 30% of the recipients' income.

When asked if politicians should consider the votes of unhoused people, Calvin said: "Yes, because they are their constituents."

"When unhoused people are able to vote, they are likely going to make decisions that benefit all of us, they're going to want more public transportation, better services, better job opportunities, housing and all of the things," Calvin said. "If it positively benefits someone who's unhoused, it positively benefits most of society, except for the people who are profiting off of people who are unhoused.”

Shinn said she does "think those voices could sway politicians and could lead to more political will."

Calvin said politicians cannot avoid addressing ‌homelessness and the challenges they face because "their other constituents in the city, in the county, are so heavily impacted." 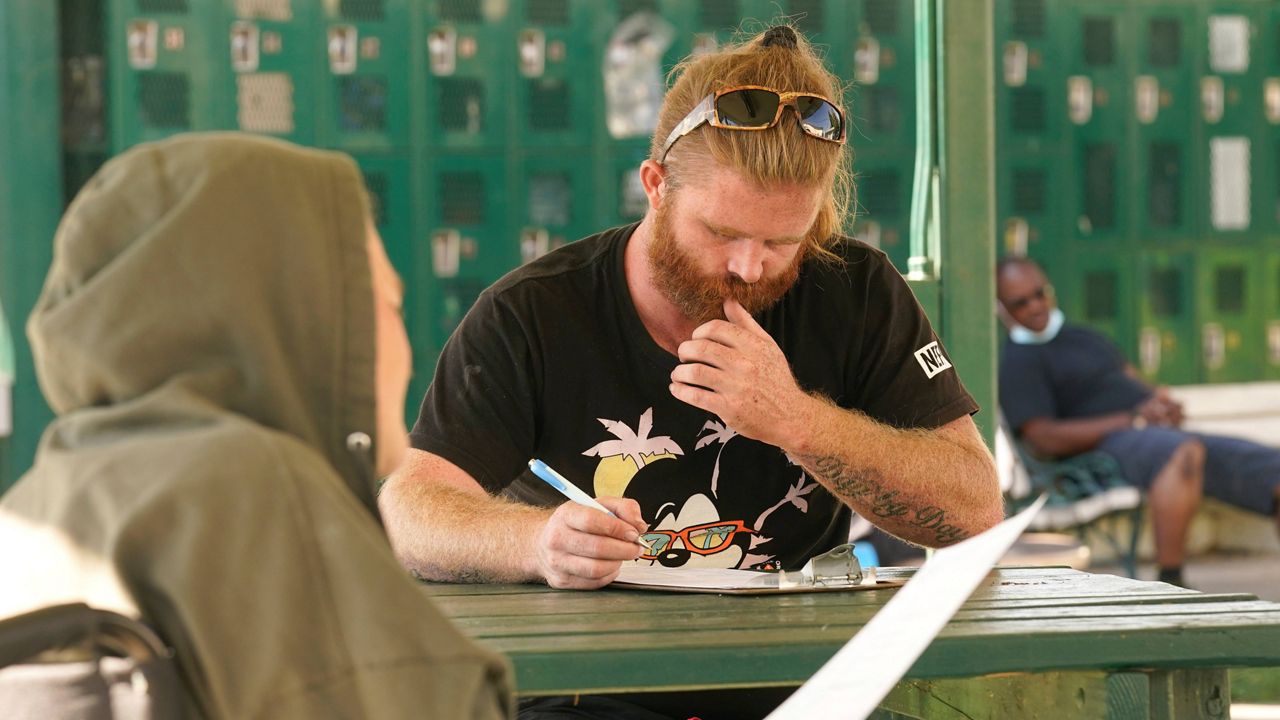 Scott Weiss, right, fills out at voter registration form at Loaves and Fishes, a nonprofit facility for the homeless in Sacramento, Calif., on Thursday, Oct. 13, 2022.

While there isn't data that shows how many people voted while homeless, there are indications about turnout based on family income.

According to Econofact.org, a nonpartisan publication that provides analysis of social and economic policies, "voter turnout in the U.S. is vastly unequal, as richer people are more likely to vote than poorer people."

The nonprofit notes that poorer people have a low chance of having their interests reflected in public policy and underscored that "understanding what drives the relationship between higher incomes and voting could help address this form of political inequality."

People experiencing homelessness aiming to vote have the power to "impact a city council election, a local election," said Courtney Cooperman, housing advocacy organizer at National Low Income Housing Coalition. "They can change the conversation, they can bring issues up for debate in the election that elected officials might not have considered if they weren't pressured at public forums or in interviews or other aspects of the media to talk about these issues."

"Every vote counts, and every engaged voter who engages with candidates counts," Cooperman added.