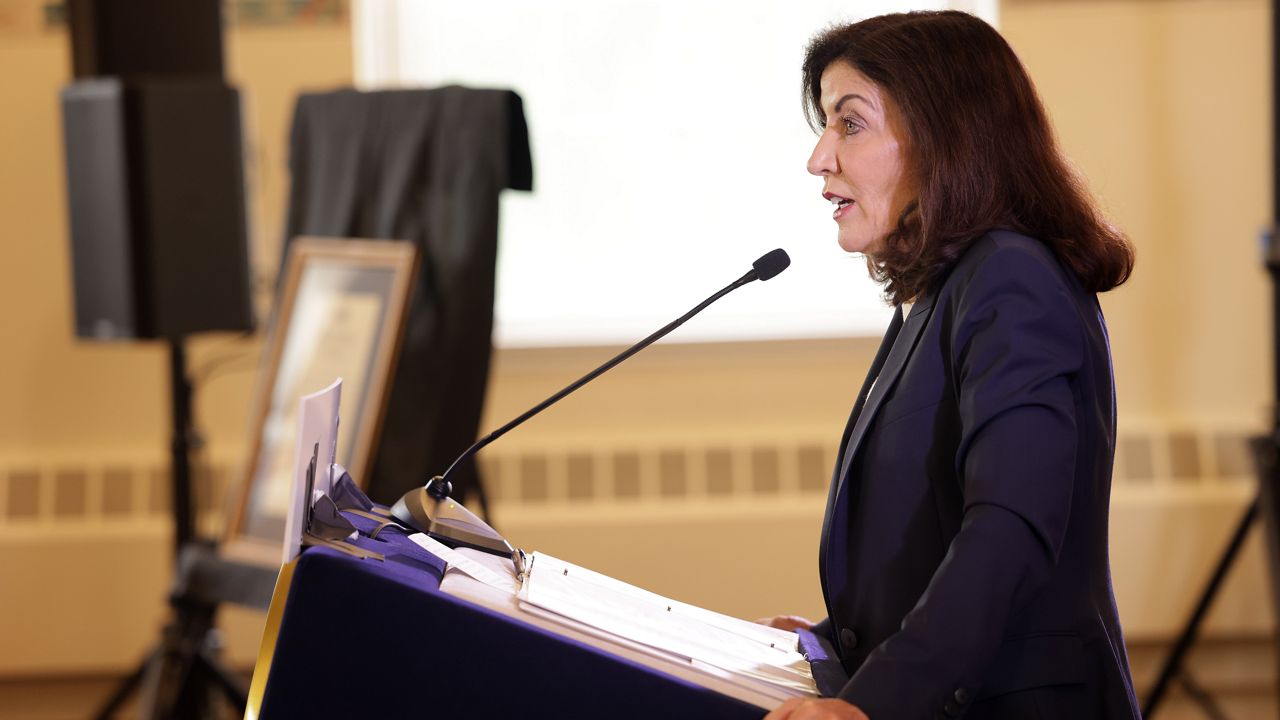 Gov. Kathy Hochul speaks at the Center For Women in Government at the University at Albany Downtown Campus Friday. (Office of Governor Kathy Hochul/Mike Groll)

Hochul defends telling Zeldin to 'get out' of New York

Earlier this week, Gov. Kathy Hochul said publicly that her opponent Lee Zeldin should get on a bus and go to Florida because he is not a New Yorker.

Zeldin currently represents parts of Long Island in Congress, and he’s been criticizing those remarks for days.

On Monday, Hochul defended her remarks as she traveled to the 19th Congressional District in upstate New York to stump for Democrat Pat Ryan, who ended up winning the special election there against Republican Marc Molinaro.

“And we are here to say that the era of Trump, and Zeldin and Molinaro, just jump on a bus and head down to Florida where you belong, ok? Get out of town. Because you do not represent our values. You are not New Yorkers,” Hochul said Monday.

Zeldin responded with a lengthy statement, adding on Twitter:

“This is reason enough to toss Kathy Hochul out of office November 8. I’m not going anywhere. I’m a lifelong New Yorker, born and raised. I’m going to stay and fight to Save Our State from the continued rule of the most arrogant, power-hungry, elitist Governor in America.“

On Friday, Hochul was asked to clarify her remarks about the Republicans in an exchange with reporters.

“Excuse me, I’ll answer your question. OK? I referred to three individuals: Donald Trump, County Executive Molinaro, and Congressman Lee Zeldin. I spoke about three people who’s views we believe are extreme. They supported the overturning of a presidential election,” Hochul said.

“Both are pushing an anti-abortion agenda that is far too dangerous for New Yorkers. Both hold views that are completely out of touch with New Yorkers’ priorities.” Says Democratic State Chair Jay Jacobs.

In other non-campaign news, Hochul seemed to take a shot at her predecessor Andrew Cuomo, and former Mayor Bill de Blasio when she said that closing schools during the early days of the pandemic was a “huge mistake” because it hurt working women. De Blasio and Cuomo fought bitterly with each other over the decision at the time.