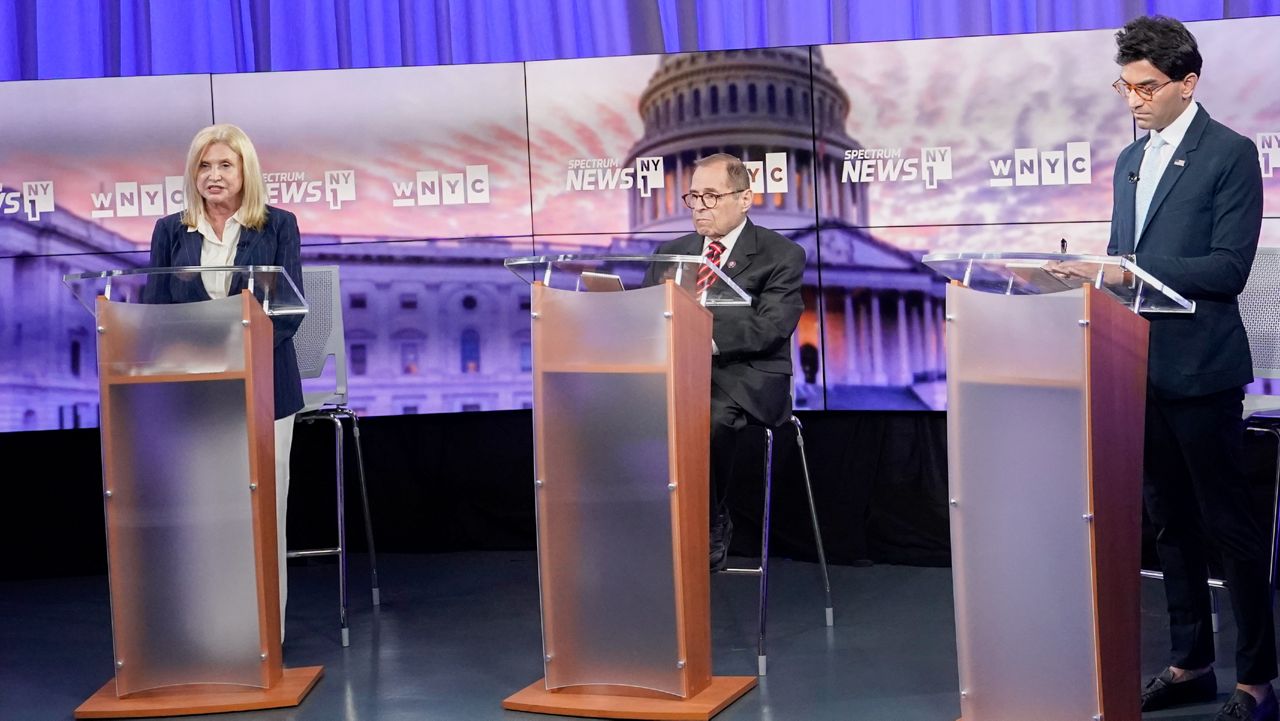 Maloney, Nadler and Patel face off in lively congressional debate

“I didn’t want to run against my good friend, Jerry Nadler,” Maloney said. “We have been friends and allies for years. Unfortunately, we were drawn into the same district.”

Challenger Suraj Patel, meanwhile, tried to prove his readiness as he called for the retirements of who he calls the “1990s Democrats.”

“Seniority and tenure does not inure effectiveness,” Patel said.

“With seniority comes clout and the ability to get things done,” Nadler said at a separate point.

Maloney raised eyebrows in the debate’s lightning round when asked about President Joe Biden’s 2024 prospects.

“I don’t believe he’s running for re-election,” she said.

“Too early to say,” Nadler answered.

When asked whether @JoeBiden should run again in 2024, @CarolynBMaloney said she doesn’t "believe he’s running for re-election." #nydebates pic.twitter.com/Rd2sVPl7fX

While the three agreed on the urgent need for more monkeypox vaccines and tread cautiously on how to reform the bail system, the Spectrum News NY1 and WNYC debate did shed light on where they differ.

Nadler, the House Judiciary Committee chair from the Upper West Side, focused on where his voting record diverges from Maloney’s.

Maloney, the House Oversight Committee chair from the Upper East Side, quantified her effectiveness in infrastructure billions brought back to her district and a dozen bill-signings with presidents.

“So after you get past a voting record, then it’s, ‘What have you done?’” she said. “And I think when you compare our records of accomplishment, my record speaks for itself.”

Maloney was pressed on why she years ago gave oxygen to a debunked theory that autism is linked to vaccines.

“I support vaccines, I support the science behind vaccines,” she said on the debate stage, adding: “I regret that I ever asked a question about vaccines or supported a study on whether or not they’re effective or not.”

Patel, an attorney who has run twice against Maloney before, seized the chance to attack her on the issue.

His spryness contrasted with the sometimes-halting delivery by Nadler in particular.

“Listen, we had 50 years to codify Roe,” Patel said. “After Casey, the Republicans pointed out their playbook and told us exactly what they were going to do. And we failed to do it despite multiple times with Democratic presidents and Democratic majorities.”