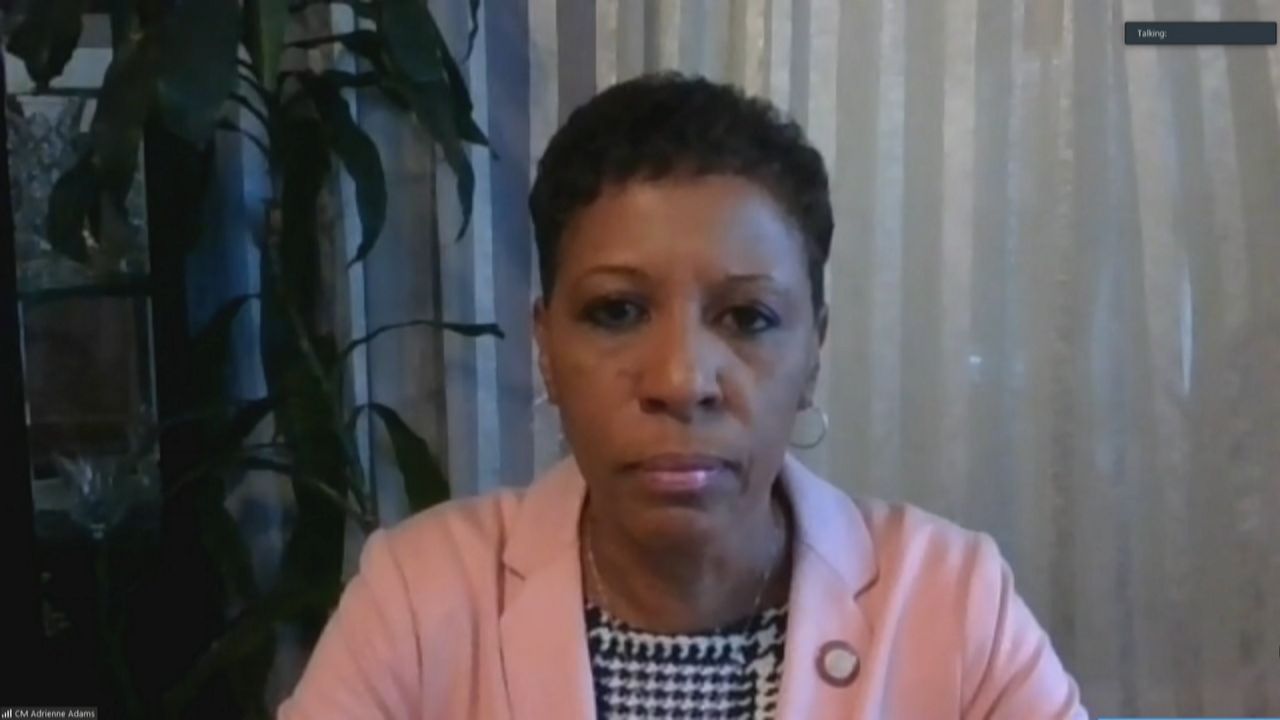 Adrienne Adams, the presumptive City Council speaker, during an interview with NY1 on Dec. 21, 2021. NY1/Emily Ngo.

NEW YORK — Adrienne Adams is set to break barriers as the first Black speaker of the City Council and a woman leading a legislative body that will be predominantly women.

“I think of my daughters, I think of my granddaughters,” she told me. “They know that their nonna has done something and has blazed a trail that has left footsteps for them to follow.”

In her first interview since securing enough colleague support to become the presumptive next speaker, Adams told NY1 she believes the city should have ramped up COVID-19 testing amid signs there would be a surge.

And Adams spoke about balancing public safety and police reform.

“We have to make sure that New Yorkers are protected. My community wants the police in the community, as many others where we see spikes in gun violence,” she said, underscoring that she does not feel resources should be taken away from the NYPD.

She does, however, believe there should be a look at how police department funds are appropriated: “I’ve said publicly, I believe that funds and funding for the NYPD is mismanaged.”

Adams, whose district includes parts of southeast Queens, also responded to an open letter signed by 29 of her colleagues and released Tuesday to demand that Mayor-elect Eric Adams reverse his position supporting punitive segregation.

Asked if there’s any scenario, violent or otherwise, in which she finds solitary confinement or punitive segregation acceptable, Adams said, “I do not. I do not.”

Eric Adams on Tuesday called it a “lie” for Council members to say he supports solitary confinement, differentiating it from punitive segregation.

“If you are violent, you must be removed from population so that you don’t inflict violence on other people, that’s clear,” the mayor-elect said, referencing his 22 years as an NYPD officer.

Adrienne Adams, who formerly served on her community board and worked for Fortune 500 companies, beat out Eric Adams-backed colleague Francisco Moya for the deeply influential speaker post.

She reflected on her first term as a Council member:

“I am most proud of the tax lien sale reform legislation,” she said.

Adams then looked forward — after the Council’s internal vote for speaker in early January — to being part of a leadership slate with roots outside of Manhattan.

“The outer boroughs and the strength of the outer boroughs, the fact that we don’t feel that we’ve been equitable served over these years, we brought all that,” she said. “When I say the truth, all of that is the truth. We brought the truth to the table.”