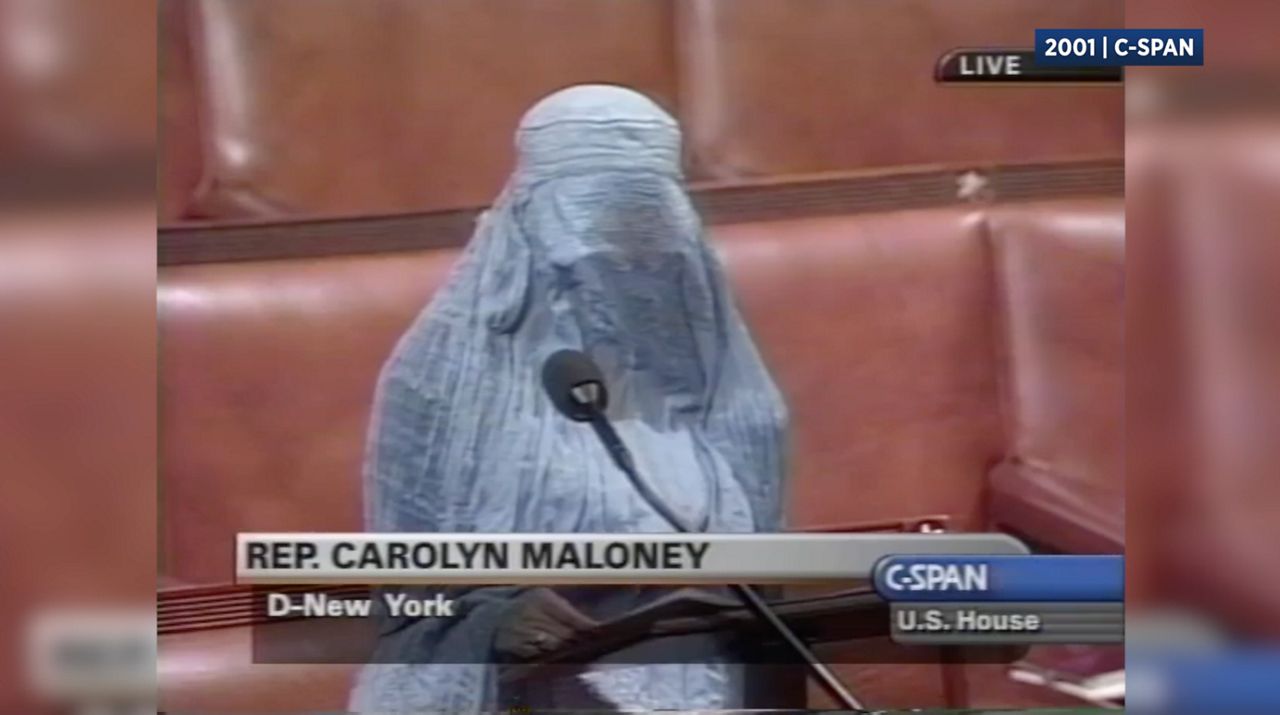 Rep. Carolyn Maloney is defending her decision to wear a burqa on the House floor in 2001, as fears that women will lose civil rights in Afghanistan under Taliban rule trigger a debate in a Democratic primary in New York’s 12th congressional district.

Maloney, who represents parts of Manhattan and Queens, wore the burqa while giving a speech in the weeks following the Sept. 11 attacks, railing against the treatment of women in Afghanistan.

“The restrictions on women's freedoms in Afghanistan are unfathomable to most Americans,” she said during her remarks. Under Taliban control at that time, girls were barred from schools and women faced limitations on their movements outside the home.

But the Democratic lawmaker’s decision to wear the garment is coming under scrutiny.

Rana Abdelhamid, a progressive who is challenging Maloney in next year’s primary and is backed by Justice Democrats, says the congresswoman fed into a negative narrative.

“Maloney ... wore a blue burqa on the House floor to advocate for the invasion of Afghanistan, under this very lslamophobic narrative that Afghan women needed to be saved,” she said.

“As a young Muslim woman who grew up in a post 9/11 New York City, I understand very intimately the harm that that narrative had on communities like mine,” she continued.


I was 9 years old when I watched my Congresswoman wear a burqa in Congress to justify the invasion of Afghanistan.

For the rest of my life, I knew that as a Muslim woman my identity would be weaponized to justify American wars.

20 years of war later, what did we accomplish? pic.twitter.com/er5xnbaTqc

Maloney, for her part, defends the burqa, arguing sometimes “you have to be dramatic” to raise awareness about an issue. "I was making a point," she said.

The two also have disparate takes on America’s 20 years in Afghanistan.

“I think that the war helped women. And I think it overall helped the country,” Maloney said, noting that the goal of the war was to respond to the 9/11 attacks.

Abdelhamid, by contrast, points to the civilian casualties, saying, “We know in reality that countless lives of Afghan women have been lost under the U.S. invasion of Afghanistan.”

In recent days, a Taliban spokesman warned working Afghan women to stay home - at least temporarily - for their own safety, saying Taliban fighters may mistreat them.

The announcement underscores the uncertain future for women there.

In a recent letter to the Biden administration, Maloney wrote that the U.S. has “an obligation to do everything in our power to ensure that women and girls who rose to prominence or sought to advance in Afghan society during the past two decades are not killed by the Taliban for doing so.”