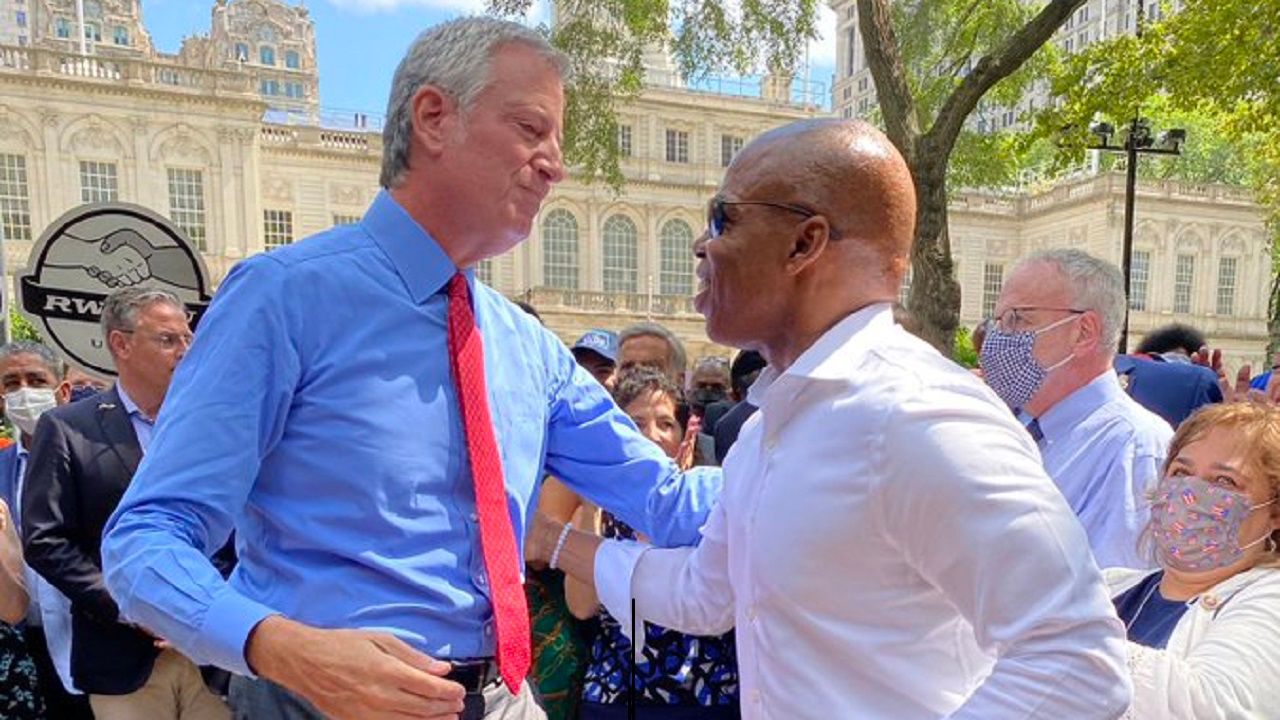 NEW YORK — The Democratic Primary is now in the rearview mirror and Eric Adams is looking ahead, getting the support of City Hall's current occupant.

"I'm here to endorse Eric Adams because I believe in him," Mayor Bill de Blasio said.

De Blasio on Monday joined Adams and his supporters at a rally outside City Hall, where Adams launched his general election bid. De Blasio, who quietly worked behind the scenes to help Adams get elected during the primary, joined the event and praised Adams's record as a police reformer.

"I remember watching with admiration, years ago. Before anyone was talking about Eric Adams ever running for anything," de Blasio said at the rally. “An activist from within the rank and file, and his voice mattered.”

Adams will face off against Republican nominee Curtis Sliwa in November.

As he campaigns for mayor with the support of de Blasio, Adams have to walk a line to distinguish himself from the status quo at a time the city is grappling with an increase in shootings and COVID-19 numbers are on the rise.

"He's still the mayor of the city of New York, I can just continue to engage in the conversation," Adams said when asked how he would work with the sitting mayor to implement some of his ideas.

Despite new guidance by the Centers for Disease Control and Prevention (CDC), de Blasio stopped short Monday of mandating New Yorkers wear masks again. And even as the delta variant spread increases, de Blasio is only asking people to wear masks indoors regardless of vaccination status.

Adams agreed. "I don't believe we are there with the mandate yet unless CDC tells us,” Adams said. “Whatever the science tells us, we must follow, but then personal responsibility must kick in also.”

Adams raised eyebrows last week after he made comments during a closed-door fundraiser, saying he is running against the Democratic Party's socialist movement. During Monday's rally, Adams was talking unity.

"So here we are Democrats, we are here," he said. “No matter what we believe, there is one thing we all embrace: the next mayor needs to be a Democrat.”

In a city where Democrats outnumber Republicans, Adams is the heavy favorite to win the general election in November. He'll have four months to unite the Democratic Party's progressive and moderate wings and turn the page from the current administration.