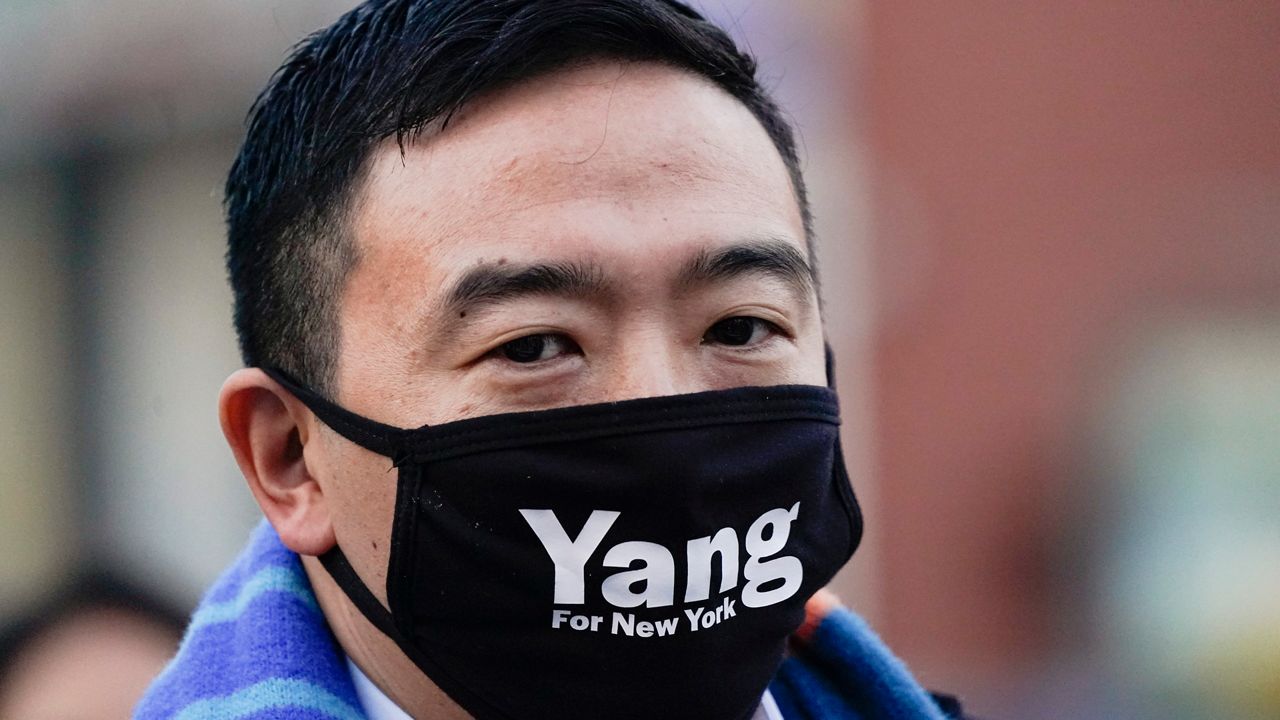 Andrew Yang in Brownsville on January 14, 2021, one day after launching his campaign for mayor of New York City. Frank Franklin II/AP.

Andrew Yang Backs a Civilian Commissioner for the NYPD, Keeping the SHSAT

NEW YORK — Tech entrepreneur Andrew Yang, the latest candidate to enter the crowded race for mayor, said he backs appointing a civilian commissioner for the NYPD, and supports keeping the high-stakes entrance exam for specialized high schools but wants to broaden the criteria for admissions.

On working to eliminate police misconduct within the NYPD, @AndrewYang tells @errollouis he believes the department could use a civilian commissioner. Here’s his reasoning. #NY1Politics pic.twitter.com/klW1wIwp5A

Several candidates for mayor have called for new leadership at the NYPD after years of accusations of over-policing, and after officers were seen on video using overaggressive tactics against Black Lives Matter protesters after the death of George Floyd in Minnesota.

On the Specialized High Schools Admissions Test (SHSAT), Yang, who formerly headed a test preparation company called Manhattan Prep, agreed with critics of the exam that standardized tests reward families in need. For his part, Yang falls in the camp of compromise, telling NY1 the exam should be used as a data point, but academic records and a student's background and experience should also be used to determine entrance into the specialized high schools and gifted and talented programs.

"I would not abandon the SHSAT, but I would broaden the criteria that we use," Yang said. "And I think if we do that, we can get some of the families into these specialized high schools in a way that's going to benefit them and the city."

Moving to a controversial education issue, @AndrewYang, a parent of two public school students, says he would not abandon the #SHSAT, but instead broaden the criteria the city’s specialized high schools use to select students. #NY1Politics pic.twitter.com/K3hLt4Vdk7

The SHSAT has long been criticized. The city's elite public high schools that use the exam to determine admission, like Stuyvesant and Bronx Science, are largely Asian and white, even though Black and Hispanic students make up most of the school system. Yet Mayor Bill de Blasio, after attempting to eliminate the exam, faced intense protests from exam supporters, who argued the current system is fair and that city should instead focus on improving all schools. Asian American parents and groups have been particularly vocal, arguing the plan to scrap the exam amounts to racism and unfairly targets Asian teenagers, who make up a large share of the students admitted to the specialized high schools.

Universal Basic Income, the proposal that helped propel Yang to fame as a candidate in the race for the 2020 Democratic presidential nomination, still remains at the top of his agenda, though slightly scaled back.

He proposes giving New Yorkers living below the poverty line at least $2,000 per year. The program is projected to cost at least $1 billion in city money and require additional private-sector funding.

Yang told NY1 he would like to see New Yorkers use basic income to support "small businesses that are struggling to stay open, especially locally owned minority- and women-owned business." When asked if the government should set parameters for the use of basic income funds, Yang said he supports some regulations.

"My inclination would not be to try and tie it to certain forms of behavior, which I think is very difficult in terms of monitoring and administration. It would be tying it to where it's used. If you're going to use these funds at a local mom-and-pop business that right now is on the verge of closing, then there's not much you can do in that store that anyone would have a problem with," Yang said.

Yang says he has proposals to make sure the money stays in New York City, but he did not provide details.

Among his other proposals:

But he begins his bid facing questions, including from his new mayoral opponents, about his commitment to New York City.

In his tour of four of the city's five boroughs earlier in the day, he was asked how he'd convince someone to vote for him, if his own history shows he's never cast a ballot for any city race.

"In a way, I'd be the perfect person to do that because if approximately 87% of New Yorkers haven't voted in a city election, I have a feeling it's something like I've felt over a number of years where we've taken city government somewhat for granted," he said.

And Yang explained his widely attacked defense of the amount of time he and his family spent at their second home in upstate New Paltz during the pandemic.

He had told the New York Times of being in a two-bedroom apartment while working from home and remote-schooling two kids: "Can you imagine?"

"I think very, very deeply and painfully about what families are going through in this time, every single day," he said earlier Thursday, adding that the Times quote was taken out of context.