Amazon is coming to New York City, and battle lines have already been drawn over the deal.

Amazon is Coming to NYC. Here's Why People are Advocating for — and Against — the Deal.

Amazon is coming to New York City, and battle lines have already been drawn over the deal. The corporation, city, and state announced in November that they reached a deal to build a secondary headquarters, HQ2, in Long Island City, Queens.

Here are some of the reasons why so many people are getting heated over the deal. 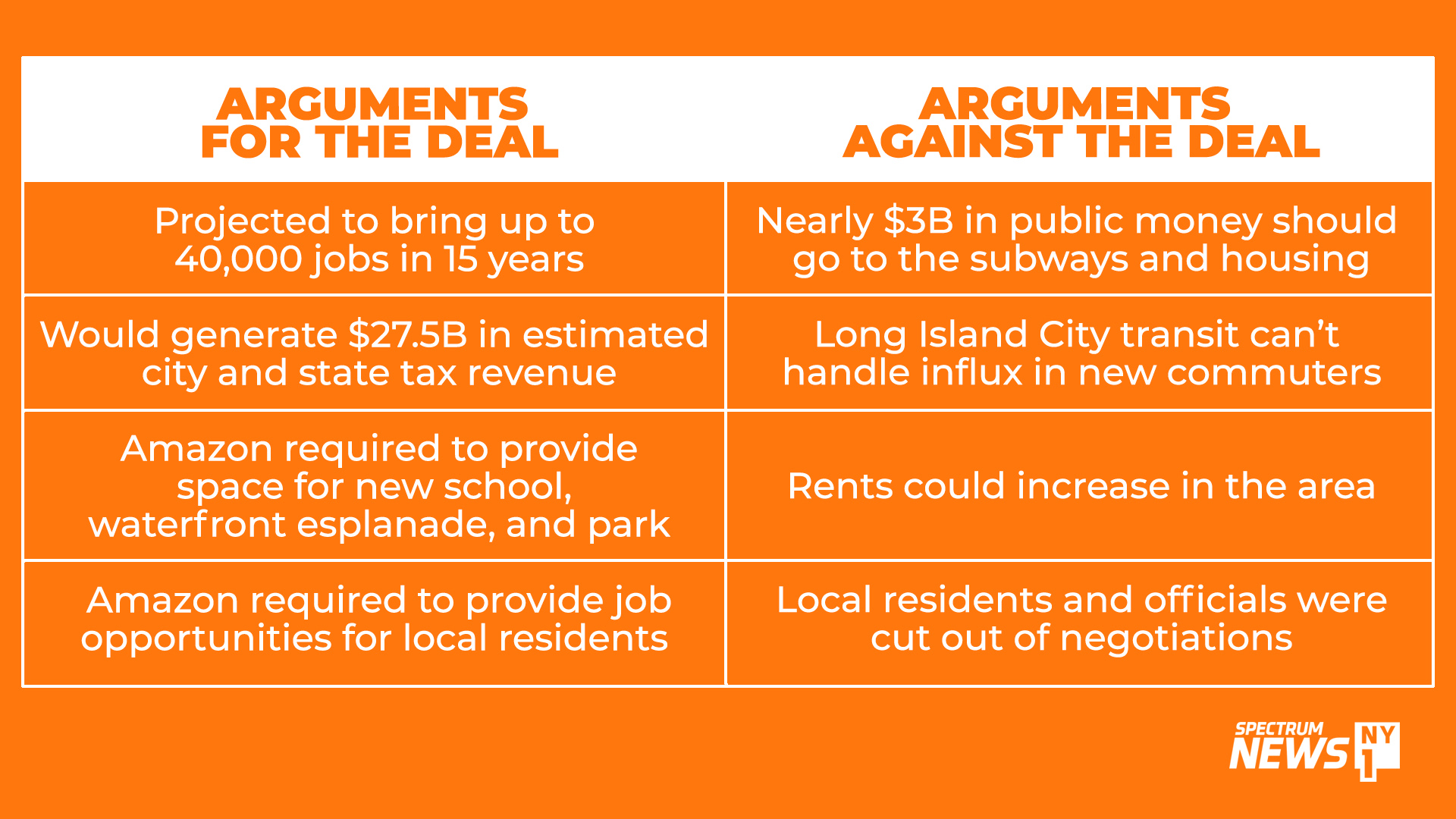 WHY SUPPORTERS WANT AMAZON TO COME TO NEW YORK CITY

Jobs and billions in estimated revenue:

The HQ2 project is expected to bring in 25,000 jobs for the New York City community, with the potential for 40,000 in 15 years. Mayor Bill de Blasio has called it the "biggest new jobs deal" in the history of the state.

Amazon will receive about $2.8 billion in taxpayer subsidies, but officials say the investment will pay for itself nine times over thanks to $27.5 billion in estimated city and state tax revenue. Governor Andrew Cuomo has argued that revenue could help fund anything from schools to subway repairs.

Public dollars going toward the project include $1.2 billion in state tax credits, a $505 million direct state grant, and an estimated $1.3 billion from the city in the form of a property tax abatement and a tax credit tied to the number of jobs created — pre-existing programs the city stressed are available to any developer.

Under terms of the deal, Amazon is required to provide space for a new 600-seat school, a waterfront esplanade and park, and an on-site job training and recruitment center, creating opportunity for local residents, de Blasio said, including those in the nearby Queensbridge Houses.

WHY ADVOCATES ARE COMING OUT AGAINST THE DEAL

Billions of dollars in incentives for one of the wealthiest corporations in the world:

The main point of consternation for lawmakers and advocates is the tax incentives for the megacorporation. They argue it's outrageous that Amazon, which has a value of hundreds of billions of dollars, would get nearly $3 billion in taxpayer money when New Yorkers need investment in public transit and housing. A December Quinnipiac University poll found that while New Yorkers support Amazon bringing one of its new headquarters in Long Island City by a 2-to-1 margin, they are divided about the company getting the tax incentives:

Concerns if local transit can handle the influx in new riders:

Aside from their anger over public money not going to repair the subway system, some New Yorkers have raised the alarm over how the new headquarters will impact already-strained subway lines and stations in the area.

Amazon will initially set up near Court Square, which is home to the E, G, M, and 7 lines. The station averaged 23,672 weekday riders in 2017, according to the MTA, leading to concerns about how the expected influx of thousands of new commuters every day will impact the stations and lines.

"The stations need to be addressed," said Lisa Daglian, executive director of the Permanent Citizens Advisory Committee to the MTA. "They're dark, they're overcrowded, they're antiquated. There have been some upgrades that are being made to them, but to really be able to address the number of people that are coming into the community, there has to be investment in transit."

The city admits that mass transit in the area needs to improve and floated the potential addition of a Long Island Rail Road station in Long Island City, as well as a shuttle bus linking to the city's NYC Ferry service.

Fears that rents will skyrocket:

Even before Amazon announced its deal, Long Island City had been called one of the fastest-growing areas of the country. But real estate agents say buyers' and investors' interest in the community is even greater now.

While Amazon says the HQ2 workers' average salaries will eventually be $150,000 a year, real estate experts at Street Easy predict that high real estate prices in Long Island City might prompt buyers to look in neighboring Astoria, Sunnyside, and Greenpoint.

Local officials and residents are voicing concern, then, that Amazon's move would drive up rents and force long-time residents and businesses out.

Some realtors point to the potential Seattle comparison. "When Amazon opened their headquarters there, the rents in the area increased by 50 percent and the average home price doubled," realtor Patrick Smith said.

When pollsters asked city voters if their biggest concern about the Amazon deal was its impact on housing, transportation, or quality of life, more voters said they were concerned about housing:

None of these: 3 percent

All of these: 19 percent

A lack of community impact:

The opaque nature of negotiations, in which city and state lawmakers and community members were excluded, rankled some New Yorkers. Some argue Amazon should not be allowed into the city at all since it refused to hold open discussions and debate before it finalized the deal with the governor and mayor.

City and state lawmakers, including some who signed earlier letters calling for the online giant to move to the city, are angered the deal was negotiated without their input.

My statement on @amazon choosing Long Island City as the site for their HQ2. pic.twitter.com/eOtuqDmHyN

Particularly, they have slammed Amazon, the governor, and the mayor for using an accelerated state approval process rather than the city's land use review, which officials admitted would have been a deal-breaker.