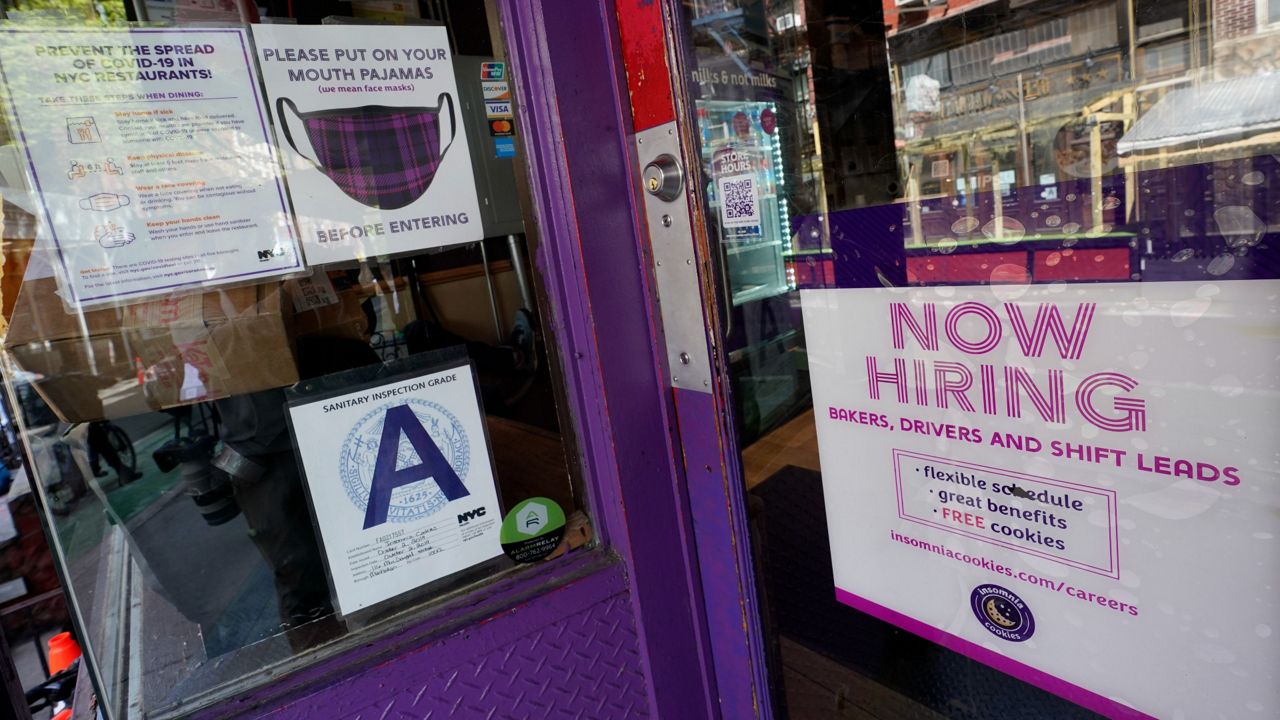 A "help wanted" sign hangs in the doorway of an Insomnia Cookies storefront in New York. (AP Photo/Mary Altaffer)

Starting Tuesday, most employers in New York City will have to follow new rules around reporting salary ranges in job postings, in an effort that fair pay advocates say will reduce wage gaps for women and people of color.

The law makes New York City the largest municipality in the U.S. to enforce pay transparency for both external and internal job advertisements. A similar law passed by the state legislature this year could go into effect if signed by Gov. Kathy Hochul.

While elected officials and workers cheered the law as a step toward workplace equity, the city agency tasked with responding to allegations of violations of its rules is woefully understaffed, said City Councilwoman Gale Brewer, raising doubts about whether the law will be fully enforced.

“It’s a good law,” said Brewer, who chairs the council’s committee on investigations. But, she added, the understaffing “is a big problem.”

Here’s what you need to know about the new pay transparency law.

What is the law aiming to fix?

The wage gap in New York state between men and women has grown in recent years, according to a state comptroller report from March. In 2019, the latest year the report studied, the median salary for male managers in New York was $100,000, compared with $80,280 for women.

In the city’s municipal labor force, the median salary for men is $83,201 and $60,327 for women, according to a September report from the City Council. Compared to every dollar earned by white city employees, Asian workers earn 85 cents; Hispanic workers make 75 cents; and Black workers receive 71 cents.

“This is a situation in which people are chronically underpaid,” Esta Bigler, the director of the Cornell University School of Labor and Industrial Relation’s Labor and Employment Law Program told NY1. “And once you're underpaid, it's almost impossible to make up the deficit you have over a lifetime.”

Other reports suggest the COVID-19 pandemic may have made wage gaps much worse, as Black unemployment remains considerably higher than average and a significant dropoff in women participation in the labor force.

How does the law work?

The law requires all covered businesses or employers of domestic workers to list “good faith” salary ranges for any posting for a new job, promotion or transfer opportunity for positions based in New York City. The law covers remote jobs and part-time jobs.

“‘Good faith’ means the salary range the employer honestly believes at the time they are listing the job advertisement that they are willing to pay the successful applicant(s),” according to the city’s fact sheet on the law.

Any business with at least four employees (including the owner) where at least one employee works in New York City is covered by the law. The law also covers any employer of at least one domestic worker.

In postings, employers have to post lower and upper estimates for the salary, in any place they are advertising the position. The posting does not have to include other benefits, such as health care or overtime.

How can I report violations, and what are the penalties?

To submit anonymous reports of potential violations of the law, call the City’s Commission on Human Rights at (212) 416-0197, or fill out this form.

Businesses found to have violated the law will initially have 30 days to address the violation. If an employer does not address a violation, they may have to pay up to $250,000.

Prospective workers and employees can also sue businesses in civil court over alleged violations of the law.

How effective will city enforcement be?

The Commission on Human Rights, which is responsible for investigating violations of city labor rules like the salary transparency law, as well as housing discrimination, has perhaps the highest proportion of unfilled positions of any city office, Brewer said.

As of June, she said, its headcount was 99 out of 136 budgeted positions — about a 27% vacancy rate. The lack of staff, she said, could not just affect the agency’s ability to respond to complaints, but also do any proactive investigations to seek out instances of pay transparency law violations.

“A really good commission would look at some of these businesses and do a search,” she said. “I’ve been worried about this from day one.”

Brewer said the Council, which has held several hearings on the city’s problems with keeping and bringing on new workers, hopes to boost funding in next year’s budget for key agencies.

The Commission on Human Rights did not respond to a request for comment.