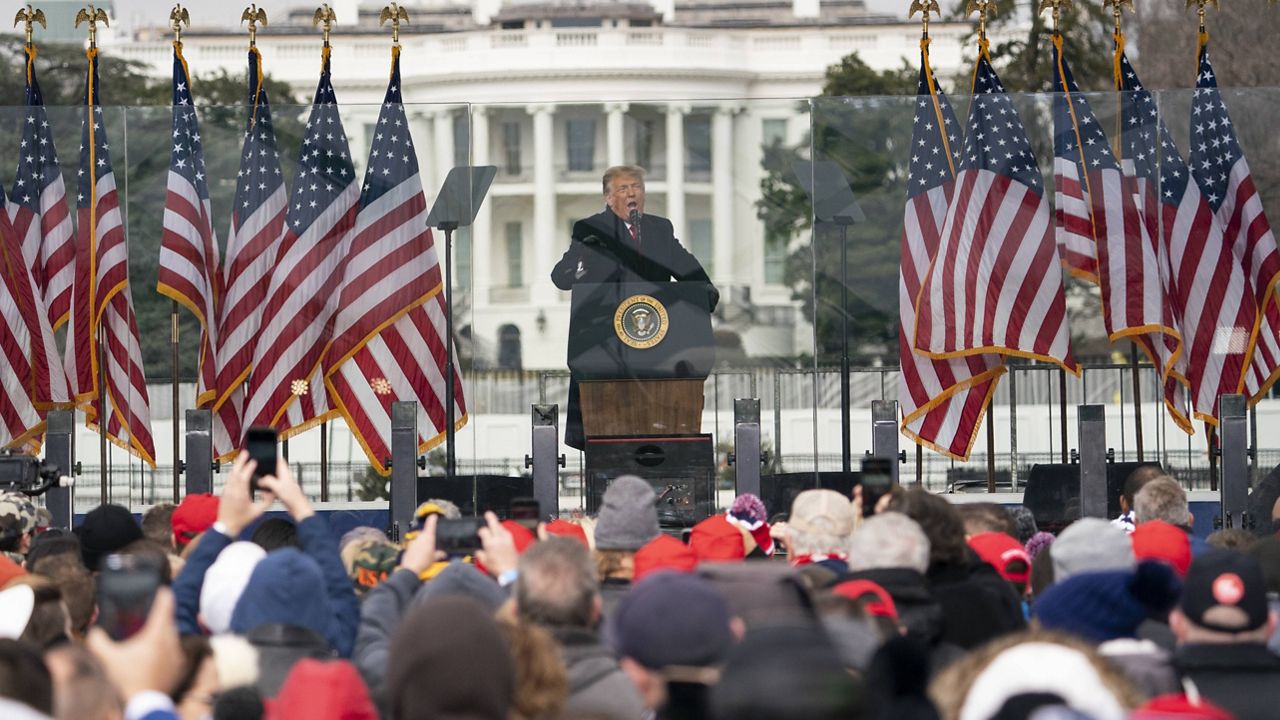 Analysis: Could Donald Trump face charges for his role in Jan. 6? Experts weigh in

The House Select Committee investigating the Jan. 6th attack is not expected to meet again publicly until mid-July.

But the issues raised in the panel's explosive hearing on Tuesday are reverberating across Washington and the country.

The testimony from Cassidy Hutchinson, a former aide to White House chief of staff Mark Meadows, has raised new questions about the conduct of then-President Donald Trump and whether he should be prosecuted criminally for his actions leading up to and on the day of the insurrection.

Hutchinson testified for two hours about former President Trump, recalling the days and weeks leading up to the Jan. 6 insurrection, telling of both firsthand encounters with the president as well as those she heard from other prominent administration figures.

Among some of the more explosive testimony were Hutchinson’s recollections of Trump’s more violent outbursts, including smashing plates and upending tables, allegedly assaulting a member of his security detail and an apparent disregard for the safety of his vice president, despite knowing Mike Pence was possibly in danger as Trump supporters called to hang the nation’s second-in-command.

At the end of the hearing, committee vice chair Rep. Liz Cheney, R-Wyo., teased yet another concerning detail: that the president and some of allies attempted to dissuade witnesses from testifying in front of the committee, suggesting those actions could amount to witness tampering.

When Tuesday’s hearing was over, experts believe seemed something big had shifted.

By "real," he meant that Hutchinson offered a potential roadmap to the unprecedented: a former president charged with a crime.

“Ms. Hutchinson's testimony was absolutely devastating in painting a picture of an individual who was behaving in ways that are really unhinged,” Jacobs said.

The Justice Department has not yet divulged plans, if it has any, to charge the former president for a particular crime. But lawyers not involved in the case say Trump could be investigated for sedition, or trying to illegally block the Electoral College count.

Seditious conspiracy, sometimes simply known as sedition, occurs when two or more people in the U.S. conspire to “overthrow, put down or destroy by force” the U.S. government or levy war against it, or oppose by force and try to prevent the execution of any law. Typically, simply advocating for violence or the use of force against the government is not, in most cases, considered sedition, as free speech is protected under the First Amendment; but someone who actively participated in the planning of such an event could be charged with the crime.

Cases of seditious conspiracy are legally complex and difficult to win, but the charge carries with it a potential sentence of up to 20 years in prison and a fine.

Should Trump be indicted, he likely could still run for president come 2024, as the U.S. Constitution does not explicitly prohibit an individual with a criminal indictment or conviction from running.

However, a separate provision of the Constitution – added after the Civil War – says no public official who “engaged in insurrection or rebellion” against the government can hold office again.

Still, lawmakers do not have the power to levy charges against Trump, and can only make referrals to the Justice Department for prosecution.

At least two big moments during the Jan. 6 hearings were seen as bolstering that opinion.

One came from Richard Donoghue, who served as acting deputy attorney general in the waning days of the Trump administration and who testified during last week’s Jan. 6 hearing.

“The president said: ‘Just say the election was corrupt, and leave the rest to me and the Republican congressman,’” Rep. Adam Kinzinger, R-Ill., asked Donoghue, referring to the former president’s repeated claims that the election was stolen from him, without sufficient evidence to back those allegations. “So Mr. Donoghue – so that’s a direct quote from President Trump, correct?”

“That’s an exact quote from the president, yes,” Donoghue responded.

That quote from Donald Trump is “perhaps the most powerful evidence that the president knew there had been no voter fraud, or at least no actionable voter fraud that would make a difference,” Jacobs said.

Then, there was Hutchinson’s recollection of the Trump rally on January 6.

She told the committee Trump knew his supporters were armed – but still beckoned them to the Capitol where his loss was being certified.

“I overheard the president say something to the effect of ‘I don’t effing care that they have weapons,’” she told the committee both in recorded testimony and on Tuesday. “‘They’re not here to hurt me. Take the effing mags away.’”

“Mr. Trump not only hears that they're armed, says let them in, take the mags away and let them march on the Capitol," Jacobs said. "All of those things suggest that there is an intent there.”

Trump says he’s the victim of a “witch hunt.”

Of course, Trump’s claims of election fraud were ultimately unsuccessful in overturning the election, as Joe Biden was sworn in.

But in merely trying to stop that day, Trump could be exposed to lawsuits.

“A conspiracy does not have to succeed to be a crime,” Jacobs said.

But there is a bigger dilemma in charging the former president, particularly in a fraught election year where Trump has already proven to still hold significant sway in the Republican party.

If Trump is charged, many of his ardent supporters would likely see the case as illegitimate – the product of a political vendetta by a Democratic administration, no matter the evidence.

But if there was criminal wrongdoing and no charges were brought, future presidents might be emboldened to break the law.

“I would make the argument that for the rule of law, for our democratic republic, for our Constitution, that we cannot have presidents attempting to overturn elections,” Barbara Perry, director of presidential studies at the University of Virginia's Miller Center, told Spectrum News. “The Constitution is lost if that happens.”

And while an indictment would be unprecedented, the nation has been tested before.

”The Republic withstood ultimately the Civil War, the worst case of some kind of attempt to undo the union,” Perry noted.

And it’s not just in federal court where Trump faces potential legal issues.

There is at least one ongoing investigation into Trump’s role in the election in Georgia, where a grand jury is hearing witnesses about Trump’s efforts to reverse Joe Biden’s narrow win there.

Trump took particular issue with election results in a number of states, Georgia being one of them, as he lost by just under 12,000 votes – a tally that, after numerous recounts, was affirmed to be accurate and with no sign of election fraud that could have substantially impacted the results of the election.

The question in front of the grand jury in Georgia whether what Trump did – there, or elsewhere – was illegal.