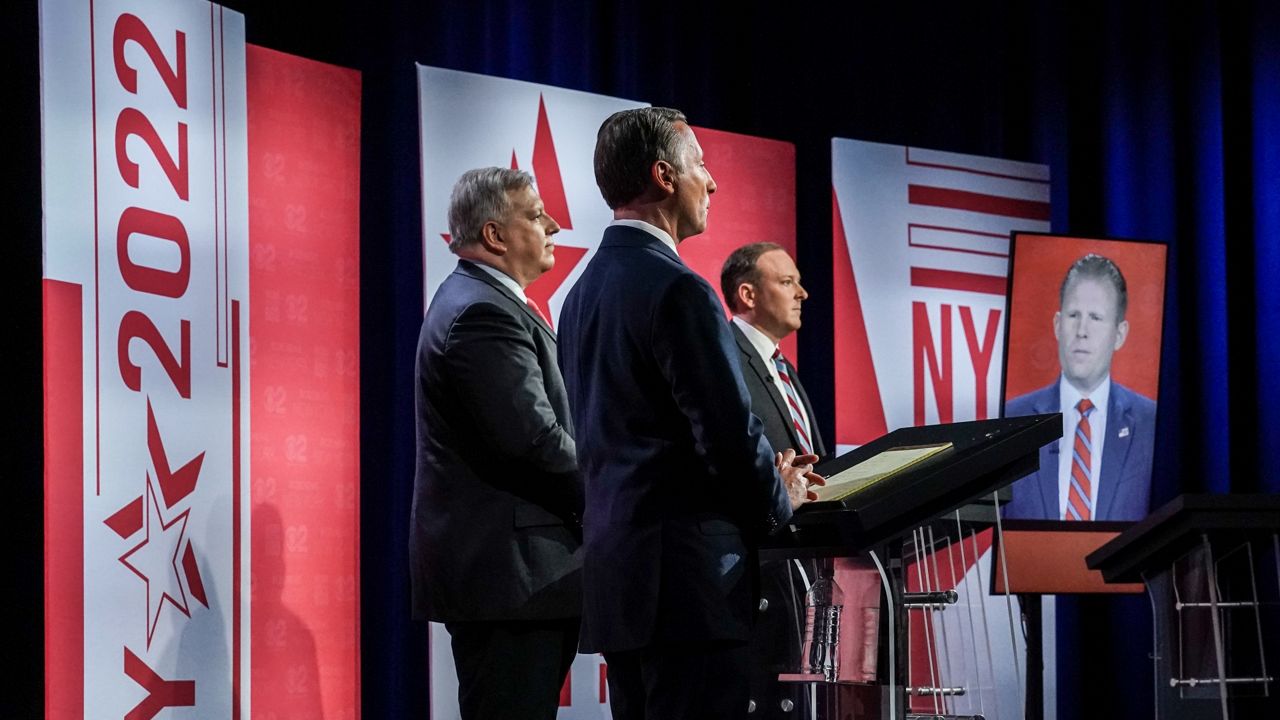 Republican candidates for governor face off in fiery debate

Rep. Lee Zeldin has a leg up in the Republican primary for governor as the state GOP’s designee.

But he took no chances at a debate Monday night. The Suffolk County congressman fiercely attacked his rivals, especially Albany-area businessman Harry Wilson whom Zeldin claimed is a Republican in name only.

“You’re on the wrong debate stage, man. You should be debating Hochul and Williams and Suozzi,” Zeldin said.

“I will in the general election,” Wilson shot back.

Wilson later said: “I am a Reagan conservative. I have been one since I was a little kid.”

Zeldin and Wilson have the most cash-on-hand among the GOP candidates.

The contender with the smallest campaign war chest but the biggest name recognition is Andrew Giuliani, son of Rudy Giuliani, the former New York City mayor and counsel to Donald Trump.

The first question of the WCBS-sponsored debate was, in part, on the role of the former president in the Jan. 6 riot at the U.S. Capitol.

“President Trump told his supporters to go peacefully and patriotically to the Capitol,” Zeldin said.

“I do think he bears some responsibility,” Astorino said. “I think most people would say that, Look, we’ve got to move on, though.”

Wilson focused on illegality and “the people who broke the law by invading the Capitol,” adding: “Mr. Trump did not invade the Capitol.”

Giuliani, who worked in the Trump White House, did not say what role he believed the former president played in the insurrection, but voiced his support for Trump.

He participated remotely in the debate from another studio because he is not vaccinated against COVID, a requirement of WCBS visitors.

Giuliani asked at one point: “What are we doing here? Is this political theater? Just like Jan. 6th?”

The four candidates agreed the rights of law-abiding gun owners should be protected. Astorino and Zeldin additionally argued that gun-free zones don’t work.

Giuliani, Zeldin and Astorino said New York’s law affirming the right to abortion goes too far. Wilson said he was not comfortable with later-term abortion but added, “I will not fight to change the law.”

Astorino, Giuliani and Zeldin argued at the debate in favor of fracking for natural gas while Wilson said more broadly he wanted to expand energy supply.

The candidates portrayed New York City as violent and dangerous, Astorino using this line: “If you’re lucky, you’ll be hit over the head with a bag of poop. I mean that’s a good day going into the city now.”

The primary is June 28 and early voting begins this Saturday.